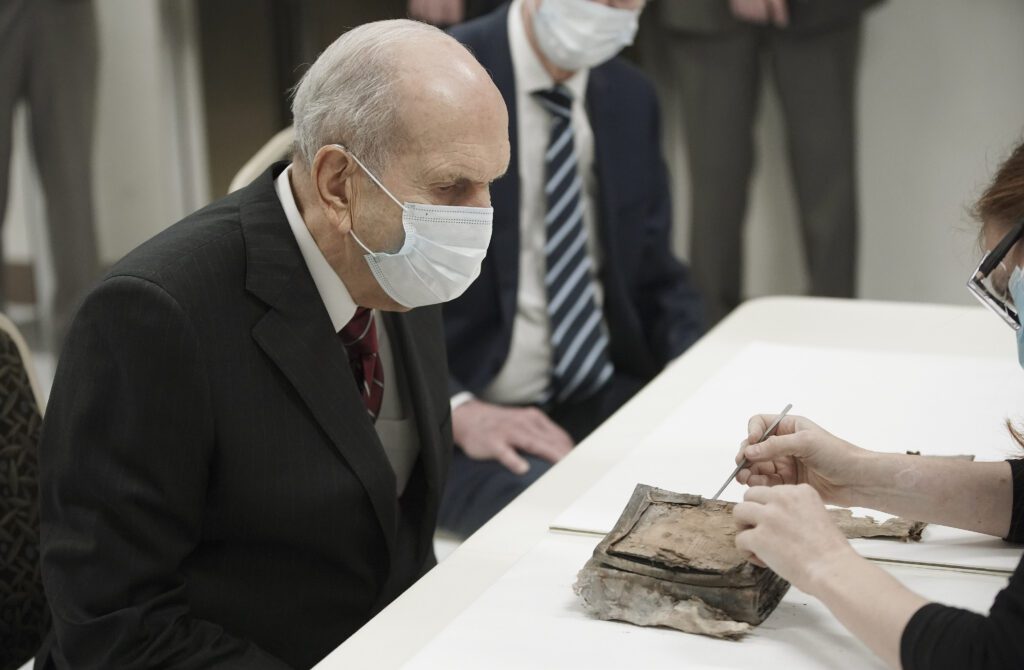 Meridian published an article about the Salt Lake Temple capstone only a few days ago. To read that article, CLICK HERE.

The Salt Lake Temple is one of the hidden things in our Treasures of the Restoration jigsaw puzzle. Do you have yours yet? BUY IT HERE.

Just past noon on April 6, 1892, a hurried messenger arrived at the Salt Lake Temple with materials to place inside the temple’s capstone — the large granite sphere upon which the 12-foot 5-inch angel Moroni statue stands.

Four parcels wrapped in silk oilcloth were carefully laid in the north, south, east and west parts of the capstone, according to an article in the Salt Lake Herald-Republican published the following day. The south and east parcels were placed in concrete compartments; the north and west parcels were laid directly into concrete.

“There’s a dime, lay it in,” someone said. Within moments, every man on the platform threw coins into the capstone, the article states.

A few minutes later, a crowd of 40,000 watched as President Wilford Woodruff, fourth president of The Church of Jesus Christ of Latter-day Saints, laid the capstone by pressing a button to enact an electric motor and place it in position. The ceremony signified the end of construction of the Salt Lake Temple, and the sacred building was dedicated a year later.

More than 128 years later, on a morning in late May, the First Presidency — President Russell M. Nelson and his counselors, President Dallin H. Oaks and President Henry B. Eyring — donned masks and watched as Emiline Twitchell, conservator at the Church History Library, carefully removed items from the south compartment of the capstone.

Twitchell pointed out the leather binding of a book and the fragments of the oilcloth it was wrapped in. Twitchell and Emily Utt, historic sites curator for the Church, showed the First Presidency Parley P. Pratt’s signature on the book “Voice of Warning” and pages from the Pearl of Great Price.

“We did not expect to find much because we knew that the contents of the capstone had not been insulated from the weather during the 128 years that had elapsed,” said President Nelson. “But we wanted to be there anyway, just to be close and to pay tribute to the leaders and courageous pioneer craftsmen who against all odds built this magnificent temple.”