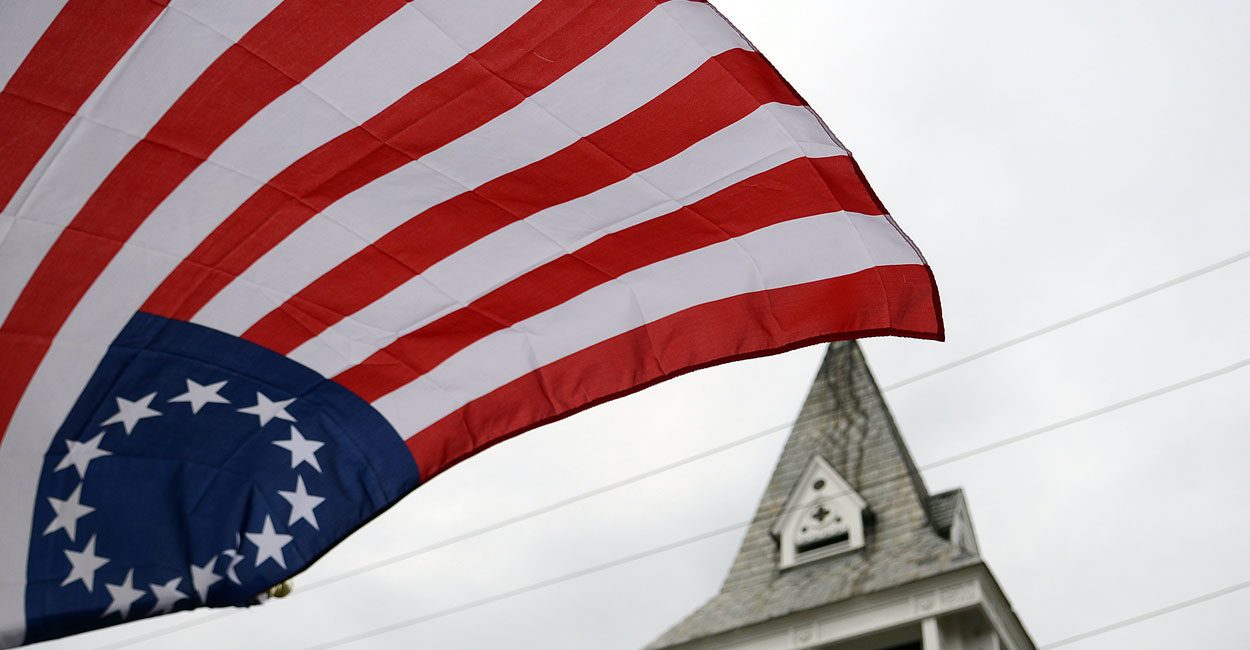 Nike recently pulled a line of shoes—the Air Max 1 USA, featuring a Revolutionary War-era American flag, the so-called Betsy Ross flag—which was slated to be rolled out for the Fourth of July holiday.

Why? Because, according to The Wall Street Journal, Nike endorser and former NFL player Colin Kaepernick deemed the flag an offensive symbol:

After images of the shoe were posted online, Mr. Kaepernick, a Nike endorser, reached out to company officials saying that he and others felt the Betsy Ross flag is an offensive symbol because of its connection to an era of slavery, the people said. Some users on social media responded to posts about the shoe with similar concerns. Mr. Kaepernick declined to comment.

Kaepernick is a former NFL quarterback who washed out of the league after popularizing national anthem protests.

“I am not going to stand up to show pride in a flag for a country that oppresses black people and people of color,” Kaepernick told the NFL media when he launched his protests. “To me, this is bigger than football and it would be selfish on my part to look the other way. There are bodies in the street and people getting paid leave and getting away with murder.”

But being logically consistent doesn’t seem to be a problem for Kaepernick and Nike.

In response to Nike’s decision to pull the shoes, the governor of Arizona pulled state incentives on Nike’s new factory to be built outside Phoenix.

An excerpt on that story from CBS News appears below:

The governor, a Republican, made his move a day after the Goodyear City Council unanimously approved Nike’s plan to build its third U.S. manufacturing plant, making Nike Air shoes in the suburb of Phoenix. The city agreed to waive nearly $1 million in plan-review and permit fees and reimburse Nike another $1 million for the jobs created, according to local media reports.

As the deal was approved, Nike separately decided against releasing the Air Max 1 Quick Strike Fourth of July, “as it featured the old version of the American flag,” the company told CBS News in a statement.

Ducey in a tweet called Nike’s decision a “shameful retreat,” saying “American businesses should be proud of our country’s history, not abandoning it.” Ducey, the former CEO of Cold Stone Creamery, said he’d “ordered the Arizona Commerce Authority to withdraw all financial incentive dollars under their discretion that the state was providing for the company to locate here.”

The Lord told Joseph Smith that he raised up these righteous men (and women) to be the foundation of our country. Who are we to question His judgement? I think He knew there were slaveholders among them, but he needed them to frame our constitution, and to set the stage for the future extinction of the universal historical practice of legal slavery.

Maybe we should also disrespect the First President of the UNITED STATES, George Washington, as well. Maybe we should split off from the whole southern section of the Eastern seaboard because they owned slaves hundreds of years ago. I love this country,good bad and indifferent. I love Betsy Ross for hand stitching a flag for the Revolutionary War--that gave us all the freedoms we enjoy today. I love that we have the history of the War Between the States so hopefully we don't have to resort to it again. And if we want to learn from the past we better study it and cherish it and honor it. The best way not to have slavery happen again and to make sure everyone is respected is to start with ourselves. Respect Betsy Ross for what she did. Respect George Washington and Thomas Jefferson, because even though they owned slaves that was not all they did. They gave their all to this nation. We can have the blessings and freedoms we have today because of such great men. I love the RED, WHITE, and BLUE. I love that is has flown in this nation since1776. And with all the ups and downs we have faced as a nation. It still flies. It flies in my yard and in my neighbor's yard. It flies on churches and synagogs. It flies at markets and at schools. It stands for something grand and great and bigger than any one of us or any race or any creed.