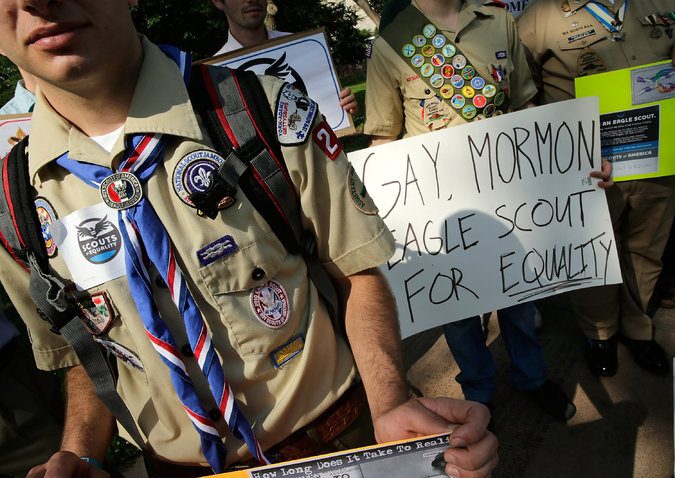 In August, the most senior leaders of the Mormon Church are expected to meet and discuss a decision with profound consequences: whether to end a 100-year relationship with the Boy Scouts of America that has helped shape both institutions.

This is not what the Boy Scouts hoped would happen on Monday when they officially lifted their ban on gay adult leaders but said conservative religious sponsors of local packs and troops could pick leaders who shared their beliefs, even if that meant limiting these voluntary positions to heterosexual men.

In adopting the new policy, the Scouts’ national board hoped to quell the growing turmoil over its position on gay leaders. But a day later, the Scouts were still torn by the issue, largely because the Church of Jesus Christ of Latter-day Saints, which alone sponsors units involving one in five scouting participants, said it might leave the Boy Scouts altogether.

While the group, the National Catholic Committee on Scouting, does not speak officially for the church, the United States Conference of Catholic Bishops “defers to them” on issues concerning the Boy Scouts, said Don Clemmer, a spokesman for the influential bishops conference.

“We recognize the increasing need for the Catholic Church to offer scouting as a program of youth ministry,” said the statement, signed by Edward P. Martin, the conference’s national chairman, and the Rev. Michael P. Hanifin, its national chaplain. Under the new policy, it said, “units will ensure that youth within their faith communities are led by faith-filled role models.”

Another major religious sponsor, the United Methodist Church, which accounts for 14 percent of youths in scouting, also endorsed the compromise policy. That denomination’s leaders and churches have been divided on homosexuality and same-sex marriage.

But the Mormons took a different approach, saying on Monday that they were “deeply troubled” by the new policy.

The church was unable to make a decision quickly on whether to remain with the Boy Scouts because its top leaders — including the president, his two counselors and the Quorum of the Twelve Apostles — customarily take time off with their families in July, said Dane O. Leavitt, a Mormon leader who serves as the liaison with the Boy Scouts in southern Utah.

“In our church, the leaders don’t make decisions based on a 7-to-5 vote,” he said. “They make decisions in unanimity, and that simply requires that they have the opportunity to be together,” said Mr. Leavitt, who added that he was not involved in the recent discussions between the church and the Boy Scouts.

The BSA will fold like a house of cards in Utah maybe. But the rest of the country could care less what they do.