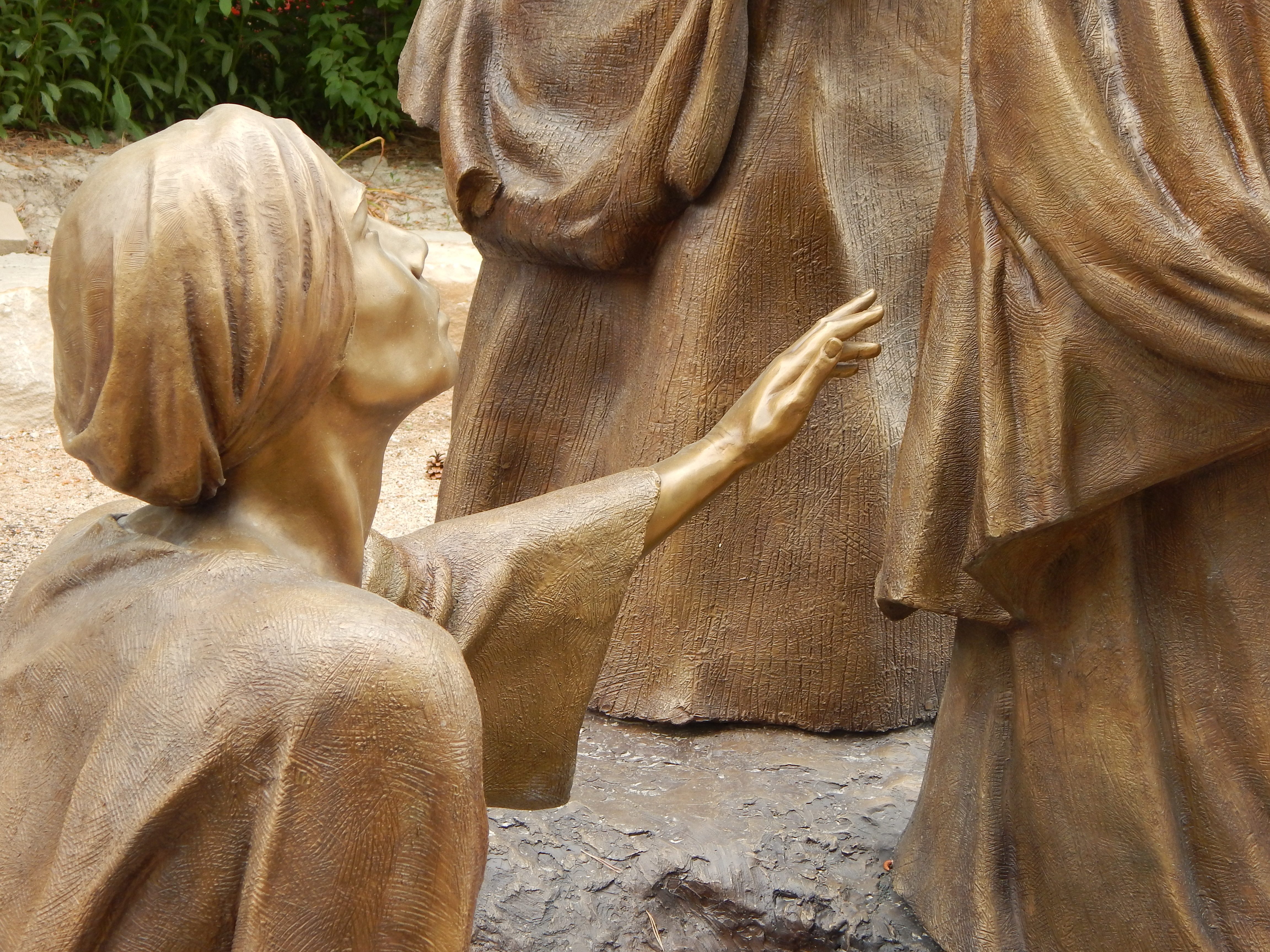 All photographs by Mariah Proctor.

Angela Johnson hoped to be an opera singer from her early teenage years. All of her training and discipline was geared towards the end goal of one day being a prima donna for the Metropolitan Opera in New York City. She grew up and sang and sang and sang and raised four kids along the way. But after 25 years of working towards this goal, she had the distinct spiritual impression one day, while sitting at her piano, that she would never take her music to that level or reach those lofty goals as a singer.

She was devastated; she called the moment “traumatic and impactful.” She didn’t yet realize all that the Lord had in store for her to accomplish.

She closed the lid of her piano (effectively closing the lid on that stage of her life), and went to an art store that very day. She bought a block of water-based clay and “one sculpting tool and four hours later, there was a portrait bust of a little girl on [her] table.”

“That’s how I started sculpting,” she says, “It was as though the finger of God had touched my heart and told me it was now time for me to develop a talent I didn’t know I had. From the moment that my hands went into the clay, all the pain from my heart was gone.”

Even in the midst of discovering this newfound talent, she probably would never have imagined at that time, the future construction of The Light of the World Garden at Thanksgiving Point in Lehi, Utah, a park set to open at the end of this summer, which will showcase 35 life-size sculptures that make up scenes from the life of Jesus Christ sculpted by Angela Johnson herself.

I had the opportunity to visit with Angela while walking around the new park and I was truly impressed by how fully immersed I felt into the world of the New Testament and the life of Christ.

The centerpiece of the sculpture garden is a massive sea in a storm with the calm and confident Christ standing in the midst of it. Angela told me how this incredible miracle stands at the center, because it is the central message she hoped to convey. “Faith in Christ is not faith in a man,” she said, “it’s faith in the Son of God.” The message is that Jesus is truly who he says he is and offers rescue to each of us, personally.

Angela said she identifies with the type of faith it would take to walk on water because as she endeavored to make her vision of this sculpture park a reality, she quickly realized she would have to have that same type of faith. She was so excited and invigorated by this idea, but as she began to tell people about it, she was largely met with skepticism that something like this could ever even happen.

It was 2003 that the idea came to her and she began to sculpt in earnest. The first opportunity for anyone to really see the work came in 2007 when she was invited by the director of the Mesa, Arizona Visitor’s Center to display her work during the Easter season.

At this point, these pieces that would one day be so large were still very small and only made of clay. Angela winced as she told me how the figures in the display would often get their toes crushed and how little pieces of the clay would get picked away by the visitors.

Mesa plays host to an Easter pageant, which brought Church Leaders in proximity to Angela’s work. They said, ‘we haven’t seen anything like this, but why isn’t it bronzed?’ The bronzing process is lengthy and expensive, but they told her that if she would get it bronzed that it could become a traveling exhibit (still featuring the statues in a smaller size). A wealthy donor made it possible to do just that and The Light of the World Exhibit toured visitor’s centers around the country for five years.

Angela was thrilled that this physical manifestation of her testimony was getting more exposure, reaching more people and becoming an increasingly successful missionary tool, but she hadn’t forgotten her dream of a garden.

It was in the capacity of guest artist at a women’s retreat that Angela Johnson first met Karen Ashton, who founded Thanksgiving Point with her husband, Alan. “Karen was sitting about three feet from me as I was giving a PowerPoint presentation and afterwards she said, ‘We need to talk.’”

“From that point, a dialogue started where we selected a location within the gardens and worked very hard to get traction and make it happen.”

Now, that location is quickly becoming a wonder to behold. No, it is a wonder–not to behold from afar–but to step into and really experience. With scenes sculpted and strategically placed for a 360-degree viewing opportunity, visitors are truly invited to discover the reality of Christ’s ministry.

“The whole objective behind every scene” says Angela, “is to create depictions of a relevant Christ. Not one that people could stand back and say ‘Oh well, this isn’t connected to me’. I want it to evoke emotion. I want something to touch the compassion in their hearts and help them understand that human issues have never changed no matter what period of life you’ve lived. There’s still sickness, there’s still social ostracism…we’ve got to understand that Christ is our Savior, not just for those people at the time that he walked the earth.”

And indeed, the people depicted alongside the Savior feel timeless and relatable while still being believable as citizens of the ancient Holy Land. There’s something new for every person to discover no matter how well they already know the scriptures. The key is in the details; it’s amazing how a story you’ve heard a thousand times can suddenly seem real and new because of the way her hair is pulled back or how tense his hand looks.

The garden promises to be a wonderful individual experience, but also an intimate invitation to a conversation with your loved ones about the effect the Savior has had or can have in your lives.

The scene you may not expect to find in a garden themed around the life of Christ is a portrayal of the First Vision, but it is an important addition to The Light of the World experience. Set in the midst of a real grove of trees, you can discover again the significance of this moment and the important way that it ties in to all the rest of what can be seen here.

Angela said she originally steered clear of anything that would make her work denominational, choosing instead to stay with general Christian verbiage and themes. But then “down came the message from above” Angela says, “you testify of the restoration and you do it now.”

The prospect of sculpting the First Vision was intimidating. It’s hard enough to sculpt the Savior, but to have to sculpt two perfect beings and have them standing above the boy Joseph in the air was no small task. No part of this Light of the World project was a small task.

When faced with feelings of inadequacy though, Angela came back to the thought that the Lord merely asked that she try. If she would just put forth the effort that God would bless the outcome to be filled with the Spirit for those that came to see it. Often times, people don’t move forward because they’re not sure they can do it—whatever it is. Rather than waiting to be sure, it seems sometimes the thing to do is just pray and start.

I asked Angela Johnson how it felt to have worked for so long and so hard on this project; to have spent hours and hours and years and years sculpting her testimony. Her response? “What else are we going to do? Shop?”

Indeed, testifying of Christ is one of the greatest tasks we can each engage in and the completed Light of the World Garden at Thanksgiving Point will be an opportunity for many others (not just Angela) to do that, with spaces for choirs to sing, lectures to happen and classes to be taught.

It opens to the public very soon and all are invited to enter the life of the Savior and realize anew the marvelous things He has done for each of us.

I went to Angela's fireside in San Jose CA a few years ago. Her story is a testament that as we put our lives in the hands of the Lord, amazing things can be wrought.

Great writing and photographs Mariah. I'm stunned with the spirit I feel in each photograph. But the amazing thing is how much more powerful they are when you stand next to them in that space! I go to Ashton Gardens every morning and when I'm among the depictions of Jesus, I never want to leave. I do feel immersed just like you said.