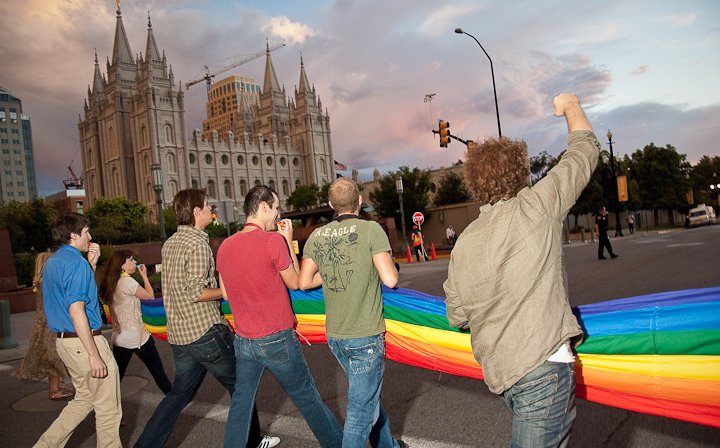 The following is an excerpt from the blog “Flirting with Curiosity,” a site devoted to “a more productive LGBT-religious conservative dialogue.” To read the full article, click here.

Much will be written today and throughout the weekend about the “narrowness” and “cruelty” of the Mormon Church in its recently clarified ecclesiastical direction regarding same-sex marriage in its congregations. The shock was tangible on social media last night – “this breaks my heart. I don’t even know what to say” – “Just wrong. So wrong” – “This REALLY bothers me” – “This is incredibly sad” – “It’s hard to believe anyone would be this cruel and close minded” –  “The Mormon leaders have gone mad with hatred” – “More Than Sick” – “Disgusting.”

And I get it.  I’ve been researching and facilitating dialogue in this area for a decade now.  And I know that from one telling of the story, the LDS Church has been “making great strides” in “softening its tone” and becoming “more inclusive and accepting” – fanning hopes among some for other adjustments and maybe even “additional revelation” in days to come.

And from within that narrative, this week’s actions feel like “twelve steps backward” after “two steps forward” as one person put it – and even “worse than Proposition 8!” another person declared.

Stipulations regarding the blessing and baptism of children, in particular, have been characterized as undeniably and inexcusably “callous” and “heartless” – with a striking sense in people’s comments that Mormon leaders are somehow taking out their hidden animus on helpless little kids (“TAKE THAT, youchildren of gay families!”) [1]

And yet – isn’t that what many people believe (or insinuate) to be happening?  The more time I spend time in this dialogue, honestly, the more complex it becomes – with so very much more to understand. If I had a chance to sit down with someone frustrated about these decisions – ideally in Jay’s cozy living room – this is the question I would ask:  Are you open to the possibility that Mormon leaders acted this week out of anyother motive than animus and spite for the gay community?  More broadly, are you open to the possibility that religious conservative individuals (and churches) have acted in recent years out of any motivation other than hate or fear?

My experience with discussions about church events on FB, has shown me that there are certain people who will always disagree to mess up a thread. There is a well known man who posts information regarding the church. The same people make and effort to confuse the issue with every one of his posts. While participating in one regarding Kate Kelly, one man wrote a quote that I supposedly said, before I was even a member. I looked at his page, and it was so vile and disgusting, that I would not even mention what I saw. So I don't think it is all confusion. Some people gang up and make comments to make it look that way.