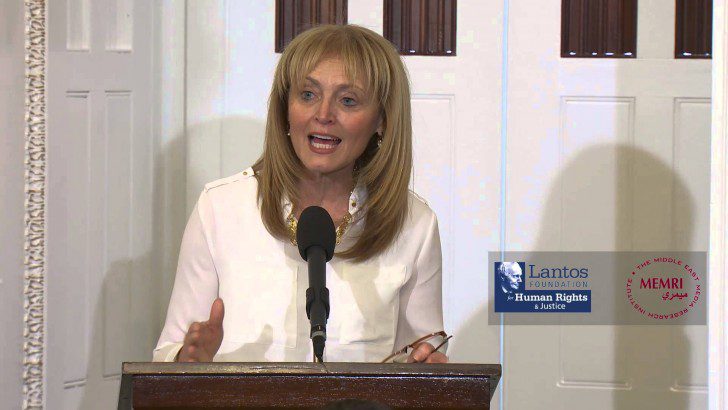 Mormon woman volunteers to be whipped to save Saudi blogger

“Are you as brave as Katrina Lantos Swett?”

That was the subject line of an email I received yesterday from the Lantos Foundation for Human Rights and Justice.

Its founder, Katrina Lantos Swett, is also the chair of the U.S. Commission on International Religious Freedom in Washington, D.C.

She’s in the news this week because she and six other human rights activists have volunteered to take 100 lashes each of the 1,000-lash punishment that Saudi Arabia is meting out to a blogger accused of heresy against Islam.

Raif Badawi, a 30-year-old Saudi writer and father of three, is currently serving a prison sentence for “insulting Islam” on his website Free Saudi Liberals (which has, ironically, been shut down). Badawi is supposed to be whipped every Friday with 50 lashes until he has been lashed a thousand times. He endured the first flogging in January, and his health was so damaged that the government has postponed (but not prohibited) further whipping.

Some background: She grew up Jewish, the daughter of two Hungarian Holocaust survivors. Her father served as a Congressman from San Francisco for 27 years, passing on to his children the importance of protecting human rights around the world.

While a teen at Yale (she got her B.A. when she was just 18), she was introduced to the LDS Church by her older sister, who was also a student, and started attending Institute classes taught by a doctoral candidate named Jeffrey R. Holland. (Wouldn’t you have loved to be a fly on the wall for those classes?)

As for "growing up Jewish," Swett's dad was a self-proclaimed "agnostic" Jew (i.e. non-believing and non-practicing) and her mother was not Jewish at all. Katrina Swett DID NOT IN ANY SENSE grow up Jewish --no Jewish observance, education, ordinances, and certainly not the requisite matrilineal bloodline), but the Swett and Tillemann-Dick (Katrina's sister) families continually exploit this misleading factoid in their never-ending quest for PUBLICITY: Look at us!! We're Tom Lantos's daughters, for Pete's sake!!! We don't attend church or hold callings, but WE'RE MORMONS! And we're JEWISH even though we've never participated in Jewish worship or religious education! Look at us!! For Swett to make such an absurd offer is only one more tacky act of self-aggrandizement. If there was any chance of being taken up on it, she likely would have held her peace. Why is Meridian feeding this? I hope your fine magazine can resist future forays into Mormon hero-worship. As a donating subscriber and an actual LDS convert from Judaism, I ask you to refrain.

brave is not the word .in that situation I would say FORGIVE THEM FATHER FOR THEY KNOW WHAT THEY DO ,OUT VERY LOUD .show that we are disciples of the jesus