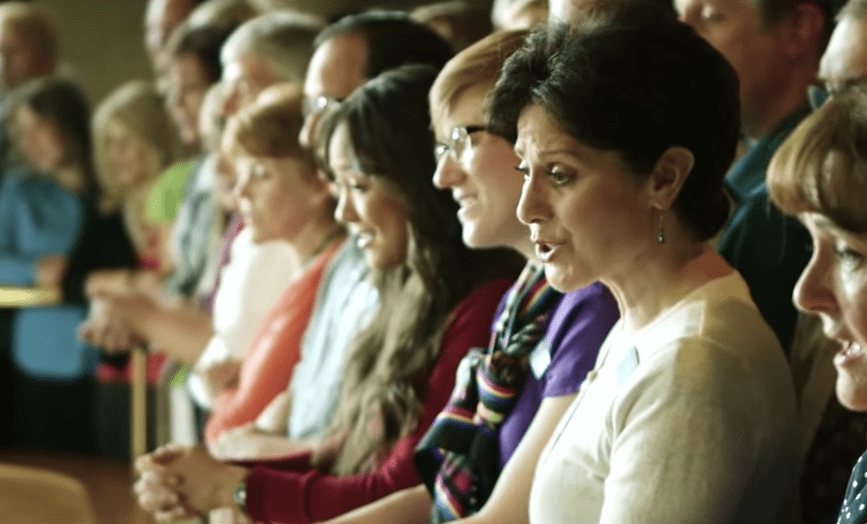 The world-renowned Mormon Tabernacle Choir immediately recognized by their familiar sight and angelic sound are starring in the upcoming full length movie, Singing with Angels. Although the choir has been featured in documentaries and concert DVDs this is the first time they have participated in a story-driven movie. The full choir is shown in multiple scenes depicting rehearsals and performances. Several choir members fill important roles within the movie.

“This is epic,” said Brian Brough, the film’s director and producer. “Working with the choir has been amazing. We spent weeks reading through true stories that choir members sent us, evaluated each story, and found the ones that could be told on screen and would best fit the story we wanted to share.”

On March 11th, 2016, be among the first to see the production from Candlelight Media, Singing with Angels, on the Silver Screen. The film opens in Utah first and will then expand to other areas. Filmed on location at the Tabernacle on Temple Square and in conjunction with the Mormon Tabernacle Choir, the movie masterfully unites the true and inspiring stories of the choir with the fictional character of Aubrey Larson.

Through a great collaboration between Candlelight Media, filmmakers, and the choir led by president Ron Jarrett, Singing with Angels is entertainment wrapped in the universal language of music from the iconic Mormon Tabernacle Choir. Along with beautifully woven storytelling and directing, “Singing with Angels is about the journey of one woman who dreams of joining the choir and finding strength through trials and challenges in life,” explains writer Brittany Wiscombe.

The film is much more than discovering what it is like to be in the choir, “Singing with Angels is a wonderful, inspirational movie. Good for the soul, and uplifting entertainment,” shared one viewer after a special pre-screening in Orlando, FL. For entertainment that can be shared and enjoyed by the whole family, don’t miss Singing with Angels, in theaters March 11.