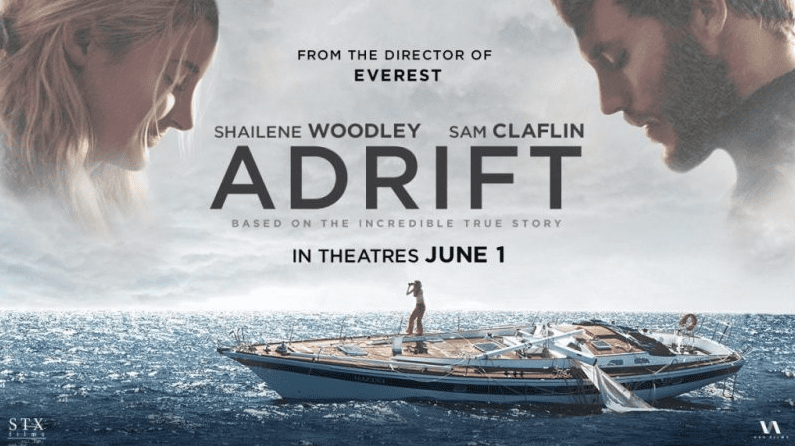 Mormon Moviegoers: Is ‘Adrift’ Worth Your Date Night Dime?

Mormon Moviegoers help you make informed decisions by reviewing films for artistry, content, and Gospel parallels. It was founded by Jonathan Decker of Ask a Mormon Therapist. For daily reviews join our Facebook group.

Based on a true story and adapted from the book by Tami Oldham, the movie reveals the romance and survival drama of a young couple whose boat is left to drift in the middle of the ocean after one of the worst hurricanes in recorded history.

Don’t read the book yet or research this true story so that you can enjoy the dramatic journey for yourself. Shailene Woodley digs deep to give a gripping and believable performance. She plays Tami, who is a strong, capable woman who is able to overcome extreme challenges.  She is no damsel in distress and even shows how being good at math can actually come in handy! (Kids always complain in school that they’ll never use math in their future life, so parents will be happy to point that out.)  Shailene is best known for her role in the Divergent movie series.  Her co-star in that franchise, Miles Teller, was going to play Richard in this film, but after he dropped out, Sam Claflin was cast.  At the end of the movie, you get to see pictures of the real Tami and Richard who experienced this horrific ordeal.

If you’re prone to sea-sickness, you just might get a little woozy. The majority of the movie was actually filmed at sea, so there wasn’t as much CGI as you would think there would be.  Rumor has it that there was a lot of vomiting during the shooting.

The story moves back and forth in time from the romantic meeting of Richard and Tami to the nightmare they find themselves in.  The telling works well and you become engrossed in the drama. Richard Sharp names his boat “Mayaluga,” which means “one who crosses the horizon” in another language.  There are metaphors and poetic language that balance the ugly reality of surviving at sea for weeks.

Elder Dieter F. Uchtdorf reminded us in a General Conference talk that hope in God, His goodness, and His power refreshes us with courage during difficult challenges (“The Infinite Power of Hope”, Ensign, Oct. 2008).

Trina Boice is an author of 23 books and teaches online for BYU-Idaho in the Pathway program.  She received the Young Mother of the Year honor in 2004, an award that completely amuses her 4 sons. She’s a popular international speaker in China and writes movie reviews at www.MovieReviewMom.com  You can find her books in LDS bookstores, on Amazon, and at www.TrinasBooks.com

I'm a little puzzled as to why this movie was not described as being inappropriate for LDS audiences, especially for youth. "Some profanity," including the F-word? Implied pre-marital sex? Drug use? This doesn't even seem like a close call. Knowing these things, would any General Authority see this movie? Our family certainly will not be seeing it.

Thanks for confirming that, Ralph! It is unfortunate that movie makers apparently project their absurd obsession with foul language that ruins the movies. I’ll read the book.