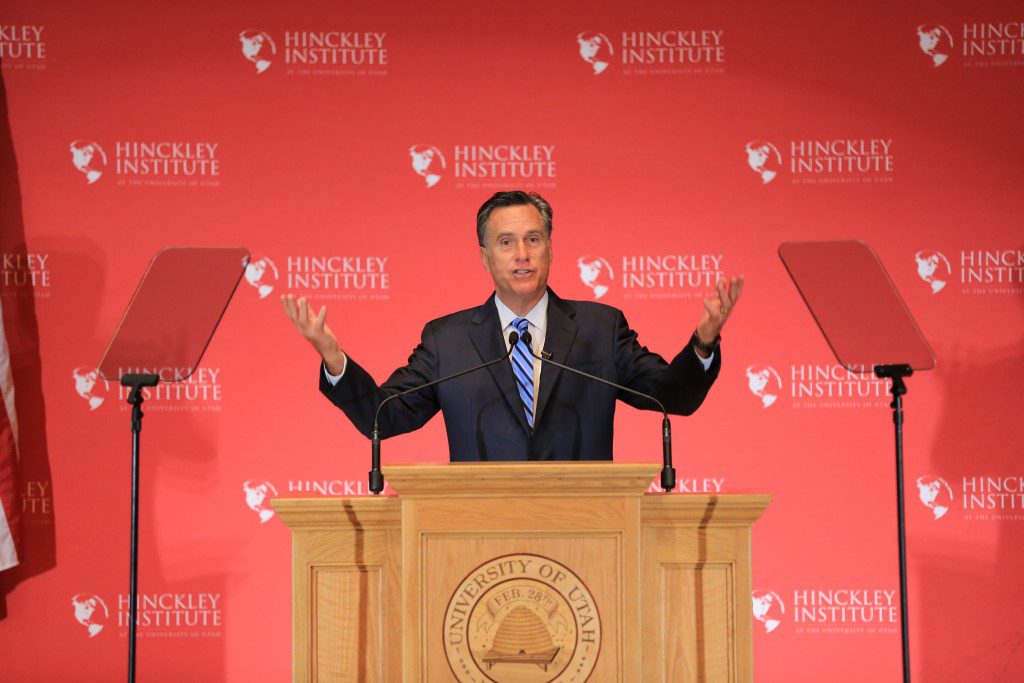 Alarmed by Donald Trump’s growing momentum, Mitt Romney delivered a “State of the 2016 President Election” speech Thursday to a turn-away audience, many of whom had been waiting for three hours, at the Hinckley Institute of the University of Utah.

That the senior statesman of the Republican party should use his influence to deflate the front-running candidate indicates just how serious and even catastrophic the prospect of a Trump candidacy is to many Republicans. A #NeverTrump movement has materialized that has only been galvanized after Trump’s Super Tuesday victories with urgent efforts to stop him led by corporate executives, financiers and Republican strategists.

Pundits are weighing in like David French who wrote in National Review, “Those of us in the #NeverTrump camp are saying all this now—in the heat of the primary—not because we’re taking our ball and going home, but because we’re laying down a marker. We will fight Trump through every state, to the convention, and beyond.”

Sixty Republican national security heavy weights vowed in an open letter released Wednesday that they will work “energetically” to prevent Trump from winning the nomination. They said that though they disagreed with each other on many foreign policy issues, they are obligated to come forward now because his vision of the world “is wildly inconsistent and unmoored in principle. He swings from isolationism to military adventurism within the space of one sentence. His advocacy for waging trade wars is a recipe for economic disaster. His embrace of the expansive use of torture is inexcusable.”

Bloomberg columnist Megan McArdle issue an open call to her readers, inviting lifelong Republicans who were so revolted at the possibility of a Trump nomination to weigh in. She was overwhelmed with responses, most of them passionate.

This is the context in which to understand Romney’s speech where he calls Trump a “fraud” and a “phony” and warns that this is “a time of choice” for both the future of the Republican party and even more important, the future of America.

He neither announced his candidacy, nor endorsed a candidate, but came to warn.

He said, “I know that some people want the race to be over. They look at history and say a trend like Mr. Trump isn’t going to be stopped. Perhaps. But the rules of political history have pretty much been shredded during this campaign.”

His critiques were both on Trump’s character and policy. “I am far from the first to conclude that Donald Trump lacks the temperament to be president. After all, this is an individual who mocked a disabled reporter, who attributed a reporter’s questions to her menstrual cycle, who mocked a brilliant rival who happened to be a woman due to her appearance, who bragged about his marital affairs, and who laces his public speeches with vulgarity.

“Donald Trump says he admires Vladimir Putin, while he has called George W. Bush a liar. That is a twisted example of evil trumping good. There is a dark irony in his boasts of his sexual exploits during the Vietnam War while John McCain, whom he has mocked, was imprisoned and tortured.

“Dishonesty is Trump’s hallmark: He claimed that he had spoken clearly and boldly against going into Iraq. Wrong, he spoke in favor of invading Iraq. He said he saw thousands of Muslims in New Jersey celebrating 9/11. Wrong, he saw no such thing. He imagined it. His is not the temperament of a stable, thoughtful leader. His imagination must not be married to real power.

“Think of Donald Trump’s personal qualities, the bullying the greed, the showing off, the misogyny, the absurd third grade theatrics…” When a person in a prominent position acts in this way, what message does that convey to your children and grandchildren?

His policies are as unstable as his character. People have the idea that his economic plans might help America, but, in fact, Romney says, “if Donald Trump’s plans were ever implemented, the country would sink into a prolonged recession.”

Romney gives examples: “His proposed 35% tariff-like penalties would instigate a trade war that would raise prices for consumers, kill export jobs, and lead entrepreneurs and business to flee America. His tax plan, in combination with his refusal to reform entitlements and to honestly address spending would balloon the deficit and the national debt.

“So even as Donald Trump has offered very few specific economic plans, what little he has said is enough to know that he would be very bad for American workers and for American families.

“But wait, you say, isn’t he a huge business success that knows what he’s talking about? No, he isn’t. His bankruptcies have crushed small businesses, and the men and women who worked for them. He inherited his business; he didn’t create it. And what ever happened to Trump Airlines? How about Trump University? And then there’s Trump Magazine and Trump Vodka and Trump Steaks, and Trump Mortgage? A business genius he is not.

When it comes to national security and the safety of our homes, Trump is also dangerous. Romney said, “Trump’s bombast is already alarming our allies and fueling the enmity of our enemies. Insulting all Muslims will keep many of them from fully engaging with us in the urgent fight against ISIS. And for what purpose? Muslim terrorists would have to lie about their religion to enter the country.

“What he said on ’60 Minutes’ about Syria and ISIS has to go down as the most ridiculous and dangerous idea of the campaign season: Let ISIS take out Assad, he said, and then we can pick up the remnants. Think about that: Let the most dangerous terror organization the world has ever known take over a country? This is recklessness in the extreme.”

Polls are saying the Trump would lose to Hillary Clinton, Romney noted. “A person so untrustworthy and dishonest as Hilary Clinton must not become president. But a Trump nomination enables her victory.” Trump’s radical positions so clearly and often stated will play a hundred thousand times on cable and many million more times on social media.

Romney said, “On Hilary Clinton’s watch at the State Department, America’s interests were diminished in every corner of the world. She compromised our nation’s secrets, dissembled to the families of the slain, and jettisoned her most profound beliefs to gain presidential power.”

Romney said he knew the anger that Americans feel today, but “in the past, our presidents have channeled that anger, and forged it into resolve, into endurance and high purpose, and into the will to defeat the enemies of freedom. Our anger was transformed into energy directed for good.

“Mr. Trump is directing our anger for less than noble purposes. He creates scapegoats of Muslims and Mexican immigrants; he calls for the use of torture and for killing the innocent children and family members of terrorists. He cheers assaults on protesters. He applauds the prospect of twisting the Constitution to limit first amendment freedom of the press. This is the very brand of anger that has led other nations into the abyss.”

This tough talk from Romney only mirrors a larger movement. Though he didn’t prescribe any remedies, he did signal that those who are sick at heart about a Trump nomination have good reason to be concerned. The movement to stop him that is beginning to emerge suggests there may be more to do than settle back, complain and wait for the inevitable.

Mr. Romney or Brother Romney gave a fine speech. The big problem is what others have already stated: Where was this "fire in the belly" four years ago??? It would have been more powerful and legitimate if he would have at least acknowledged that. The other damning part of the whole thing is to watch clips of him accepting Trump's endorsement last time and Mitt's kissing up to him. I worry Mitt has cozied up to the Republican party and I'm fed up with the party. I don't really know what to think of Donald Trump, but find myself less worried than Glenn Beck and Mitt Romney. Mr. Trump can also throw a wrench in the whole works since he simply can run third party if he doesn't get the nomination and guarantee the Democrat candidate wins the election. If he already knows how to work both sides through campaign donations.....what's he care? Finally, many believe we're past the tipping point culture wise and debt wise since the national debt is long past the point of ever being able to be paid off. We can't even balance a one year budget, let alone begin to chip away at the staggering trillions we owe........arggg

As I listened and then read Mitt's remarks, I felt sure that all Christians were thinking that finally, "someone is saying what needs to be said." The warnings needed to be given and I am thankful that Mitt had the courage and wisdom to speak out against Trump's being unpresidential and lack of wisdom and his egotistical blather. He has no plan how to "Make America Great Again". When Trump speaks nearly every sentence or phrase begins with "I" .Trump only wants to make himself great. How dare he brag of his adultery and use fowl language and jokes while running to be President of the United States. I have no doubt that the Pilgrims and Puritans, whose Christian values and ethics we still try to live after 400 years, would have Trump in the stocks for 100 years. I hope that we will all remember the great heritage and wisdom of our forefathers, wherever they came from, to elect good, wise, and knowledgeable men to be our president.