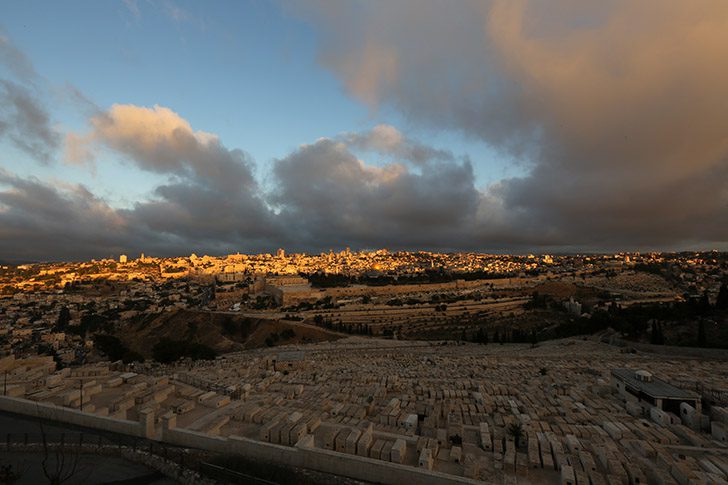 Editor’s Note: This week leading up to Easter, we will be running articles and photos from Israel depicting the last week of the Savior’s life.

Now Jesus’ hour had come. Behind Him were the green hills of Galilee, the great crowds gathering on the grass to hear His word, the lap of waves on a blue sea. Ahead lay Jerusalem, the arrogant city on a hill, tense in its self-conceit, where already in their supreme blindness in the name of religious piety, plotters were scheming to kill the Lord Himself.

Offended by His healing touch, by His words that cut to the heart of their hypocrisy, the Roman and Jewish rulers gathered in the high halls of the chief priest and conspired against Him. Jesus’ final offense that had challenged their dominion was the raising of Lazarus. “If we let him thus alone, all men will believe on him,”[i] they said. Raising the dead, healing the blind, lifting the broken heart, these were the offenses that kindled their anger and threatened their position.

Still, their fanatical hatred did not stop Jesus from coming to Jerusalem for Passover with the certain knowledge of what He would face. Bitter contempt, insult, and death waited for Him along the shadowed roads of Jerusalem, often from the very people who claimed they represented God. What superb irony!

Jesus said, “What shall I say? Father save me from this hour: but for this cause came I unto this hour.” [ii]

In Bethany, just over the hill from Jerusalem, Mary, sister of Martha, anointed His feet with a precious oil that she had saved “against the day of [his] burying,”[iii] and He patiently told apostles who could not understand that He would submit Himself to be mocked, scourged, and spat upon. He would overcome the world, but not before it appeared to all those who loved Him that the world had overcome Him. They must face His humiliation before they saw His triumph.

As Jesus first caught sight of Jerusalem, that city of palaces and ivory towers, of terraces and magnificent gardens, He wept. Though the multitude cheered as He began His descent down the Mount of Olives, He moaned in deep lamentation.

“The contrast was, indeed, terrible between the Jerusalem that rose before Him in all its beauty, glory, and security, and the Jerusalem which He saw in vision . . . with the camp of the enemy around about it on every side.”

For with God’s view, He saw that in A.D. 68, but a few years hence, the Romans would besiege the city until the temple would be left without one stone upon another, until the city would be tumbled to the ground, its former beauty in ashes.

Scene after scene must have arisen before His eyes, the gory bodies of Jerusalem’s children among her ruins, the famine that drove mothers to snatch food from their infants, the thousands crucified outside the city walls. He said that in those days the daughters of Jerusalem would say, “Blessed are the barren, and the wombs that never bare.” “Then shall they . . . say to the mountains, Fall on us; and to the hills, Cover us”[vii] —all of this because they had rejected their God.