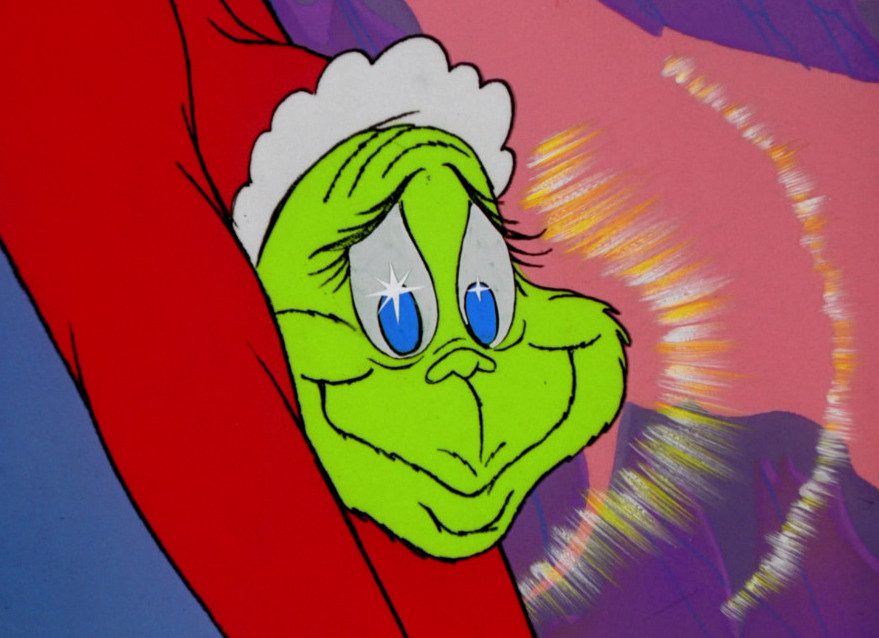 “The Grinch Who Stole Christmas”, is a simple tale that clearly illustrates that the most beloved of holidays, Christmas, is not about getting stuff or doing festive things as much as it is about who you have become because of Christmas.

“The Grinch hated Christmas! The whole Christmas season!” And the “most likely reason” was that his heart may have been “two sizes too small.” says the beloved Dr. Seuss about the now famous Christmas character, the Grinch.

As the story continues, the Grinch explains that he hates all the playing, feasting, festivities and the singing. He thinks it’s all pointless and really annoying. So, the Grinch thinks up an “awful idea” to “stop Christmas from coming” and steals every object needed to celebrate Christmas in Who-ville. Then the Grinch gets the surprise of his life when they sing anyway. Christmas came without doing, it came from their hearts; from being who they are. And, when he realized that truth high up on the top of “Mt. Crumpit” his heart “grew three sizes that day” and he returned the Christmas things and joined in the celebrations.

This simple story is like so many favorite Christmas tales about changed hearts and people who at first do things for the wrong reasons and then become someone different and decide that they are then obligated by the change they have experienced to do things for the right reasons.

To be good is infinitely more important than to do good, but that doesn’t mean good actions don’t need to take place. On the contrary, good actions are witnesses of truth and principle. But, the actions themselves don’t need to be as much of the focus as why someone does something. When someone has become a good kind of person, good actions automatically follow, because the person who is dedicated to goodness is driven to serve the goodness that has served them by changing their heart for the better.

People always ask me how to know what to do to fulfill their mission in life. The best answer to their question is always, “Living your mission is always more about who you are than it is about what you do. When you are good and wanting to serve goodness, then God will use you to do many things over the course of your life.”

Whenever we focus more upon becoming who we are meant to be and less on doing things to be noticed for, then the best kind of doing happens; the humble, helpful, loving kind. The answers to all the world’s problems exist in the simple hearts of the people, not in legislation. This is the premise of self-government, peace, power, happiness and Christmas.

In the Japanese language if something is alive and being discussed the term “imasu” [eemos] is used. If something is not alive, or not animate, the term “arimasu” [ahreemos] is used to express the object’s non-existence. It is fascinating that the state of being is so deliberately expressed in their culture. In the English language we have our own words to express existence. We call these words the be verbs.

People around the world have always placed high importance on being and becoming. Most good stories tell of a hero becoming greater and conquering vices and then making a great change upon the world. The theme is timeless because it is true. Even Shakespeare pondered the topic of existence over and over again in his classic stories such as when Hamlet questions, “To be or not to be, that is the question…”

In Webster’s 1828 dictionary the word be means, “to be fixed; to exist”. Do we then exist more and more as we become the type of person we were meant to be?

Surely, like the Grinch, we meet more of our potential and purpose as we align our hearts and wills toward what is good and true. When our wills are deliberately focused on doing what is right we have more positive impact on the world and our existence is more felt by others. So, when we focus on becoming who we should be and then take purposeful action we are more alive to those around us because we have made more of an impression on their lives.

Parenting With A Becoming Mindset

Parents are called of God to raise and correct their children. This is their role in the family and the society. There are many behaviors to correct and teach so it could be easy for parents to become naggy and overly focused on all the things the child does or doesn’t do. As part of each one of those responsibilities or instructions that parents give the children there are multiple steps.

First the child needs to look at the parents to show they are ready to receive teaching and instruction.

Second, the child needs to keep a calm voice, face and body as the parent instructs. These first two steps focus on the child’s readiness to be taught and the state of their heart and acknowledgment of their role in the family.

Next come the steps of the instruction that are the actions. The child says “Okay” or asks to disagree appropriately. Even though both of these options are actions they also manifest the condition of the heart by showing willingness to submit to their parents.

The next action is to actually do the task immediately. This is the part that most parents focus the majority of their energy on making sure happens. If the first steps of the skill are learned and focused on, the actual task will almost always be accomplished willingly.

Lastly, after the task is accomplished the child checks back with their parent for the completed chore.   Again, this is an action that shows a willing and ready heart. The child who returns and reports is the child who has learned that full communications include accounting and closure. They also want to make sure their parent is no longer burdened with the task on their mind. It is kindness to report.

Does The Grinch Live At Your House?

The story of the Grinch is the symbolic story of an angry child. The Grinch doesn’t want to be okay. He doesn’t want to be calm or happy, and he doesn’t want a role in the community (family). He removes himself from the group and complains. He judges and even plans ways to over throw the joy of the group since he doesn’t agree with their life-style. The Grinch also sees himself as way above the community, that is why he lives up on the mountain away from everyone. Some people live with Grinches like this every day.

What the Grinch children and sometimes even Grinch parents need most is a change of heart just like Dr. Seuss’ Grinch. The best way parents can help their children have this change of heart is to keep focusing on becoming who they should be as parents. Keep living according to principles and have the spirit of love and calmness in the home.

Also, teach the children about calmness. Teach them that how they feel when they do something is far more important than actually doing the task. Don’t be okay with a task done with a dark or selfish heart. Don’t even allow the child to do the task until they are ready to be calm and happy about it. The action will not serve them until they have chosen happiness first.

The most merciful thing parents can do is make sure that their children are calm before they get the opportunity to follow an instruction. This means the condition of the heart must be corrected first. Diligently teaching and promoting calmness through consistent, assertive correction will teach the child how to change their own heart. It takes practice to always be okay when things aren’t as we would like them. But, we can be just like the Whos in Who-ville and rejoice even when we don’t have all that we want and things don’t go our way.

And, we can be like the Grinch and examine our hearts and change them for the better. As we do, our existence and impact will exponentially increase. Christmas time is a great time of year to forgive, love, change and spread joy. Christmas is about being the kind of person we were meant to be and doing actions that match who we are. “Maybe Christmas…perhaps…means a little bit more” than some people think. Maybe how to be at Christmas is the model for our very existence.

For help teaching your family to have a change of heart visit https://teachingselfgovernment.com