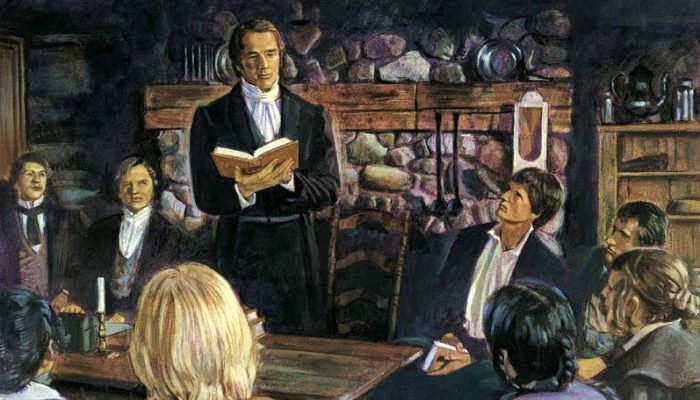 On July 20, 1833, a Missourian mob battered down the front door of William Phelps’ home. William was not in at the time, but his wife and five children were. The mob dragged them into the street. Sally Phelps watched as men raided her home, smashed her windows, and threw out her furniture. But it was the contents of the second story of the home that the rabble was really after: Phelps’ printing press.

The men tossed paper and type out the window, followed by the press itself. But the most precious item cast out by the mob was the soon-to-be published Book of Commandments. This is when 15-year-old Mary Elizabeth Rollins and her 13-year-old sister, Caroline, sprang into action.

I’ve sometimes wondered how Mary could have had so much courage. Would you or I have had enough courage to defy an angry mob that was in the process of destroying your community? These were truly two exemplary girls. But recently, I think I found another piece of the puzzle. While certainly not the only factor to consider, the story you’re about to read was surely a defining experience for Mary that must have served as a foundational piece of her life-long testimony.

I’m going to let Mary herself tell the rest of this story….The story would have taken place sometime around February, 1831, soon after the arrival of Joseph Smith in Kirtland, Ohio. She mentions that as of 1905, she was the only remaining living witness to what happened at the meeting she describes.