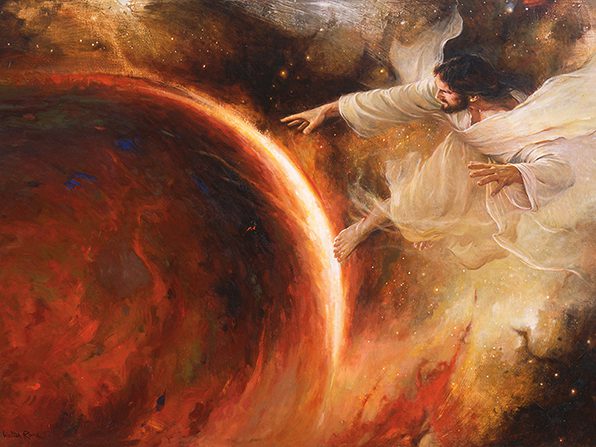 What is the Gospel of Jesus Christ? Many things could be included in an answer, but when the Savior appeared to the Nephites, he declared his gospel to them and said, “This is my gospel….that I came into the world to do the will of my Father, because my Father sent me….that I might be lifted up upon the cross….that I might draw all men unto me” (3 Nephi 27:13-14). That is the heart and soul of the Gospel of Jesus Christ. Our Heavenly Father has a great plan for our salvation, and His Only Begotten Son, Jesus Christ, is the centerpiece of that plan.

There is no salvation in any other person, or any other plan. There is no other way. Jesus is the mediator of the covenant, and he is also the One who gave us the covenant. That is why we do all things in his name, as he has commanded: “Therefore, whatsoever ye shall do, ye shall do it in my name” (3 Nephi 27:7).

The Prophet Joseph wisely observed that if we can look around us and find someone who has been saved, then we can come to know for ourselves what to do: “Where shall we find a prototype into whose likeness we may be assimilated, in order that we may be made partakers of life and salvation? Or, in other words, where shall we find a saved being? For if we can find a saved being, we may ascertain without much difficulty what all others must be in order to be saved.” Joseph goes on to explain that two beings who are totally unlike cannot both be saved because there is only one set of principles and ordinances upon which salvation rests. “We ask then,” Joseph said, “where is the prototype? Or, where is the saved being? We conclude, as to the answer of this question, there will be no dispute among those who believe the Bible, that it is Christhe is the prototype or standard of salvation.” (Lectures on Faith, 7:9.)

Here are some questions regarding our salvation which today’s reading (3 Nephi 27-30 and 4 Nephi) supply the answers. Before reading the answers given below, try looking up the verses and discovering them for yourself:

How can we tell which church is the Lord’s? (3 Nephi 27:8-10). His church would be called in his name, built upon his gospel, and show the works of the Father in it. Churches which are not the Lord’s may “have joy in their works for a season” but lack power to guide people to eternal life (3 Nephi 27:11).

What can never return to dwell in God’s presence? (3 Nephi 27:19). No unclean thing can enter into God’s rest. We must be washed clean through the atonement, by our faith in Christ, repentance of our sins, and faithfulness unto the end.

Those who repent and are baptized will receive what? (3 Nephi 27:20). The Holy Ghost.

What warning did the Savior give about following the doctrines and receiving the ordinances of his Gospel? (3 Nephi 28:34). Those who will not hearken to the words of Jesus, nor to the words of those whom he has chosen (the prophets), will not be received by him at the last day.

What warning did the Savior extend to those living in the latter days? (3 Nephi 29:5-6). Don’t spurn the doings of the Lord, don’t deny Christ and his works, and don’t deny revelation.

Which group of people did the Lord warn those living in the latter days to not “hiss, nor spurn, nor make game of”? (3 Nephi 29:8). The Jewish people. God is mindful of all the house of Israel, and he will “do unto them according to that which he hath sworn.” The Jews are part of the house of Israel.

Many sins were listed in 3 Nephi 30:2 that need to be avoided in the latter days. How can we best avoid these sins? What can we do to strengthen ourselves and prepare our families to live in such a way that we will be able to turn away from the wicked things in the world? (3 Nephi 30:2). Come unto Christ, be baptized in his name, receive a remission of our sins, and be filled with the Holy Ghost.

4 Nephi – A Type of the Second Coming and Millennial Day of Peace
There have only been a small number of societies who have been able to experience total peace and harmony – the kind of spiritual unity that exists in heaven – while on this earth. Enoch’s city took over 300 years to bring themselves to such a point. But here in the Book of Mormon, beginning with the Savior’s appearance, the people living at that time were able to experience a mini-millennium of peace that lasted for several hundred years. The appearance of Christ, his marvelous teachings, the establishment of a Zion society, and then the devolution and eventual destruction of that society are all a type of the events prophesied for the latter days.

The Stumbling Block
The greatest stumbling block to establishing a Zion society is pride. Zion is the pure in heart (D&C 97:21). Zion can only be established when hearts are made pure. Consider these questions about how Zion was established among the Nephite and Lamanites in the Book of Mormon and how their experiences relate to the day in which we live:

What were the first things people did to establish Zion? (4 Nephi 1:1-2). They came unto Christ, repented of their sins, were baptized into his Church, and received the Holy Ghost.

What character traits distinguish righteous, Christ-like people? (4 Nephi 1:2-4). No contentions or disputations. Every person dealt honestly with others. They had all things in common so that they were all free, and they were all partakers of the Holy Ghost, which resulted in peace being established throughout the land.

What blessings do righteous people receive? (4 Nephi 1:5, 7). Miracles and the gifts of the Spirit are manifest among them, and they are prospered, both temporally and spiritually.

Did the people in the Book of Mormon ever receive the higher blessings of the gospel? (4 Nephi 1:10-13). Absolutely, including apparently temple marriage and all the blessings that come from meeting with other Church members.

Why was there no contention among them? (4 Nephi 1:15-16). Because of the love of God that filled their hearts.

What happens when the pure love of Christ (charity – see Moroni 7:48) dwells in the hearts of people? (4 Nephi 1:16). “Surely there could not be a happier people among all the people who had been created by the hand of God.”

What happened when the Book of Mormon people had been prospered by the Lord? (4 Nephi 1:23-24). They were lifted up in pride, wore costly apparel, and sought after the things of the world.

What happened when they were lifted up in pride? (4 Nephi 1:25-29). They no longer had all things in common, they began to divide up into classes, and they began to build churches up unto themselves and deny Christ.

Were the people doing these things good people who were perhaps just deceived a little? (4 Nephi 1:38). No, they “did wilfully rebel against the Gospel of Christ; and they did teach their children that they should not believe” in him.

How long will God allow such wickedness to continue? (4 Nephi 1:40). Only until the wicked outnumbered the righteous. Then, when they were fully ripened in iniquity, they were destroyed (see Mormon and Moroni).

A Witness and A Warning
The Book of Mormon is both a witness of Christ and a warning to the world about the dangers of forsaking his Gospel. We know that it was written specifically for us. Because the events in the Book of Mormon seem to foreshadow many of the prophesied events of our own time, it is what happened to the Nephites and Lamanites that should concern us most. Coming unto Christ, accepting his Gospel, being admitted into his Church by baptism, receiving the marvelous gift of the Holy Ghost and following its promptings, is the surest, safest way to salvation — both temporally and spiritually. The soul-stirring and sobering words of Moroni ought to sink deep into our hearts: “Behold, I speak unto you as though I spake from the dead; for I know that ye shall have my words. Condemn me not…neither my father [Mormon]…neither them who have written before him; but rather give thanks unto God that he hath made manifest unto you our imperfections, that ye may learn to be more wise than we have been.” (Mormon 9:30-31.)

Christ, the Savior, the Son of God, is our only hope for peace and life. On the first day of this year 2000, the First Presidency and Twelve Apostles shared this testimony of the Living Christ: “We bear testimony, as His duly ordained Apostles – that Jesus is the Living Christ, the immortal Son of God. He is the great King Immanuel, who stands today on the right hand of His Father. He is the light, the life, and the hope of the world. His way is the path that leads to happiness in this life and eternal life in the world to come. God be thanked for the matchless gift of His divine Son.”

Great lesson and loved the many questions.