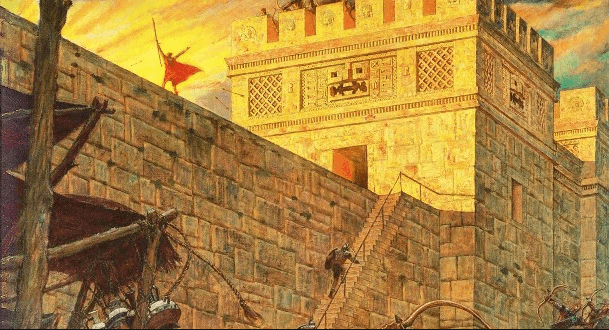 A Prosperous People
Samuel the Lamanite came to the Nephites to preach at a time when they were wealthy, secure in their sense of self-importance and numbed toward the Lord. Commenting on this, Mormon observed, “we may see at the very time when he doth prosper his people,…then is the time that they do harden their hearts,…and this because of their ease, and their exceedingly great prosperity” (Helaman 12:2). Samuel’s message was that they must repent. What is intriguing here, however, is why an economy that values materialism so often becomes Godless. What has shaped a world where people feel less dependent on God and unable to cling to values that were once important to them?

Hugh Nibley answers this question in what he calls the “sequence of folly.” He said, “The Prophet Samuel the Lamanite sets forth the interesting rule that when “the Economy” becomes the main and engrossing concern of a society-or in the routine Book of Mormon phrase, when ‘they begin to set their hearts upon their riches”-the economy will self-destruct. This is how he puts it: ‘Ye do always remember your riches;…your hearts are not drawn out unto the Lord, but they do swell with great pride,…envyings, strifes, malice, persecutions and murders, and all manner of iniquities’ (Helaman 13:22).

Note well the sequence of folly: first, we are well pleased with ourselves because of our wealth, then comes the game of status and prestige, leading to competitive maneuvers, hatred, and dirty tricks, and finally the ultimate solution. Where wealth guarantees respectability, principles melt away as the criminal element rises to the top: ‘For this cause hath the Lord God caused that a curse should come upon the land, and also upon your riches, that they become slippery, that ye cannot hold them; and in the days of your poverty ye cannot retain them’ (Helaman 13:31). ‘And then shall ye lament and say…our riches…have become slippery that we should lose them; for behold, our riches are gone from us. Behold, we lay a tool here and on the morrow it is gone’ (Helaman 13:32-34.) ‘Yea, we have hid up our treasures and they have slipped away from us, because of the curse of the land,…for behold the land is cursed and all things are become slippery and we cannot hold them. Behold, we are surrounded by demons’ (Helaman 13:35-37). It ends in utter frustration and total insecurity as morals and the market collapse together and the baffled experts surrender.”(1)

The idea that wealth confers respectability is familiar to us in our world today. Our secular society it not one that elevates character or sacrifice. Instead, we have been conditioned to believe that the “really important people” have certain social trappings and material status. The smart people are the ones who have learned to make a lot of money. We can tell they are smart because of their car or home or toys. What is dangerous about this belief is just what Nibley describes: if wealth is valued above everything else-then any behavior is excused to obtain it.

The notorious become the famous. Unscrupulous practice is rewarded. Immorality is excused. The very principles of honesty and integrity which played a key role in creating a prosperous society is no longer there to maintain it. When the foremost tool a people use to judge their leaders is their own economic prosperity, principle is tossed aside for the perks of wealth.

The Nephites who would not hear Samuel’s message had hearts that were set foremost on the economy, with every man for himself in a sort of Darwinian scramble to the top. They sought to achieve security not where it is found-in the safety of God’s commandments-but in their treasures buried in the earth. Those treasures became slippery, not because God took them away so much as because they had created a world where slippery action was rewarded with the only thing that mattered to them-material treasure.

Caught in Pride
Ironically, those saturated in this kind of pride and sense of their superiority are the least able to hear that they must change and repent. In fact, all of their energy is spent shoring up their position as the top of the heap. Self-importance has become key to their identity, and with that, the sense that they are the righteous and the right-on. To think otherwise is to threaten their very identity.

So it was with this group of arrogant Nephites. They boasted, “If our days had been in the days of our fathers of old, we would not have slain the prophets; we would not have stoned them, and cast them out” (Helaman 13:25). A more ironic comment could have hardly been said since they are about to stone a prophet and cast him out. They are violent toward Samuel while still claiming that they are the righteous. It is too offensive to their carefully crafted self-image to think otherwise.

Again we might liken this to ourselves. The Nephites asserted that they believed the prophets, but would not recogize, nor hear one when he came among them. It may be tempting to some to think an ancient prophet, whose words are written in a book, should be heeded more than a modern one speaking from the pulpit in a dark suit.

President Harold B. Lee
President Harold B. Lee taught this, “Sometimes we get the notion that if it is written in a book, it makes it more true than if it is spoken in the last general conference. Just because it is written in a book does not make it more of an authority to guide us. President John Taylor goes on with this same idea and explains why the scriptures of the past are not sufficient for us today.

‘The Bible is good; and Paul told Timothy to study it, that he might be a workman that need not be ashamed, and that he might be able to conduct himself aright before the living church [there is that word “living” again], the pillar and ground of truth. The church-mark, with Paul, was the foundation, the pillar, the ground of truth, the living church, not the dead letter. The Book of Mormon is good, and the Doctrine and Covenants, as land-marks. But a mariner who launches into the ocean requires a more certain criterion. He must be acquainted with heavenly bodies, and take his observations from them, in order to steer his barque aright. Those books are good for example, precedent, and investigation, and for developing certain laws and principles. But they do not, they cannot, touch every case required to be adjudicated and set in order.

‘We require a living tree-a living fountain-living intelligence, proceeding from the living priesthood in heaven, through the living priesthood on earth…And from the time that Adam first received a communication from God, to the time that John, on the isle of Patmos, received his communication, or Joseph Smith had the heavens opened to him, it always required new revelations, adapted to the peculiar circumstances in which the churches or individuals were placed.

Adam’s revelation did not instruct Noah to build his ark; nor did Noah’s revelation tell Lot to forsake Sodom; nor did either of these speak of the departure of the children of Israel from Egypt. These all had revelations for themselves, and do had Isaiah, Jeremiah, Ezekiel, Jesus, Peter, Paul, John, and Joseph. And so must we, or we shall make a shipwreck.”(2)

Samuel’s Prophecy
Blinded by their lust for gold, these Nephites would not feel the joy of the single most significant event their forefathers had anticipated for generations-the birth of Jesus Christ. “I give unto you a sign,” Samuel said, “for five years more cometh, and behold, then cometh the Son of God….Therefore, there shall be one day and a night and a day, as if it were one day and there were night…ye shall know of the rising of the sun and also of its setting…nevertheless the night shall not be darkened; and it shall be the night before he is born” (Helaman 13:4). The people were so self-absorbed they could not joy in this message, and later we learn that even with magnificent outpourings from heaven (Helaman 16: 13-18) they could not be moved. True to form they depended on their own strength and their own wisdom, finding ways to dismiss the signs and the message. Far from having it all, they ended up missing the significance of the most important event that would ever transpire.