Lesson 20: "My Soul is Pained No More" | Meridian Magazine 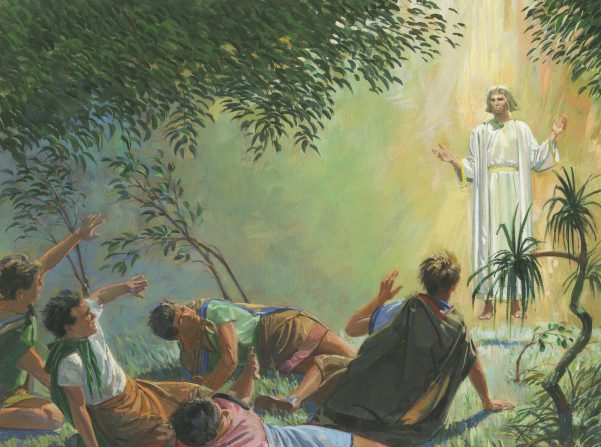 I had become especially friendly with one of the students in my institute class. She had an eagerness about her, a thirst for learning the gospel that was truly electric. If I asked a question on the Book of Mormon-our course of study-she was quick to raise her hand, and her answers were considered and thoughtful. One day after class, she came up to me and said with tears in her eyes that she had committed a grievous sin some years earlier, had left the Church for many years, and this class was her first attempt to come back into the gospel. “Can the Lord really accept someone like me back into his fold?” she asked. “Can I truly ever be clean again?”

I answered with words that surprised me because I’d never seen it so clearly before, “Your question is answered again and again in the Book of Mormon. Many of the people we focus on in the book are sinners who not only were forgiven, but arose to be the powerful leaders in righteousness of their time. Alma, Alma the Younger, the sons of Mosiah, Zeezrom, the Anti-Nephi-Lehies-all of these were black with sin. Some had been mighty campaigners against the light, using words like stones to slay their hearers. But then, they turned toward the Lord, and felt his marvelous light. Not only were they washed clean, they became his instruments-and not just puny instruments, but marvelous instruments to publish peace to thousands of people. You’ve been studying the answer to your question all semester.

“The Book of Mormon not only explains the atonement and the Savior’s mission in the clearest language we have anywhere, but it does more. It demonstrates its profound power in the lives of its main characters. Can you be clean again? The Book of Mormon gives a hearty yes!”

Many parents have identified with Alma’s heartfelt prayers for his rebellious son, Alma the Younger. Many have pled with tears for their own children. When you have taught all your child is willing to hear, when what you say falls on deaf ears, sometimes the Lord is the only place to turn, relying on his goodness and comfort to find the way.

It is easy to think that Alma the Younger and the sons of Mosiah were young adults-hard kids who were taking out their ill-will by turning on their parents. After all, what could have been more painful for Alma and Mosiah than to have their children work for the enemy of God?

It seems to be a pointed betrayal, calculated to bring the most torment to their parents. In fact, however, the evidence points to the idea that Alma was not fresh from his teenage years or twentysomething but a mature man before the angel visited him. This idea comes from a couple of sources. After the angel visits Alma the Younger, it is a relatively short period of time before his father. Alma dies at the age of 82 (see Mosiah 29:45). Would it be likely at that age to have a child in his twenties? Or is it more likely that Alma the Younger was more mature-perhaps even in his forties when the angel visited?

It is also noteworthy that he is described as “a very wicked and an idolatrous man. And he was a man of many words, and did speak much flattery to the people; therefore he led many of the people to do after the manner of his iniquities. And he became a great hinderment to the prosperity of the church of God; stealing away the hearts of the people; causing much dissension among the people; giving a chance for the enemy of God to exercise his power over them (Mosiah 27: 8, 9) This sounds like a well-practiced sinner, matured in his capacities for making trouble, not just a hot shot youth with a streak of rebellion..

The reason this question of Alma’s age is significant is because of the additional insight it gives us into the story. Alma the Younger’s sins were not trivial, but heinous and destructive; his lies had shattered the lives and eternal hopes of many people. The persecutions and disruptions to the Church were so great that the believers were beginning to complain. Alma the Younger had been about major league sinning-and probably for years. These are not trivial sins easily washed away.

What’s more a more mature Alma the Younger gives us a greater sense of Alma and his prayers. The Church that Alma had established, his life’s work, was being demolished by his own son. Alma the Younger’s avowed aim, which he was relentlessly about, was “seeking to destroy the Church” (Mosiah 27:10). Yet, this righteous father did not give up on his son. He did not resent or hate him for trampling upon everything he held dear. No, he prayed for him with great intent. These prayers didn’t last just a month or even a year. Alma didn’t give up when he saw the utter destructiveness of his son. His prayers and faith must have gone on tirelessly for several years-maybe even decades.

When the angel appeared to Alma the Younger with appropriate thunderings and shakings, he said, “Behold, the Lord hath heard the prayers of his people, and also the prayers of his servant, Alma, who is thy father; for he has prayed with much faith concerning thee that thou mightest be brought to the knowledge of the truth; therefore, for this purpose have I come to convince thee of the power and authority of God, that the prayers of his servants might be answered according to their faith” (Mosiah 27:14). All of those years Alma had been praying, all those years when those prayers must have seemed unanswered, all of them had been heard.

Here we see something about the constancy that is demanded of faith. Faith is not a momentary enthusiasm or sudden fling of concentration aimed heavenward. It is a steady way of living and seeing. It means that prayers are continued even when they seem to fall on deaf ears. It means hope is not dimmed when for all practical purposes it should be. It means that in the face of disappointment or failed expectations, the light inside still burns. Alma teaches us that, and his message is particularly poignant for parents who suffer for the waywardness of their children. Even if you can do nothing else for them, you can always pray. As it turns out, praying is actually the most you can do for them. These are prayers with the eye that sees that these are not your children alone, but his.

It is irony that sometimes makes it difficult to continue to pray in faith. Irony is a bitter pill when that thing that you want the very most is the thing you don’t seem to have. Irony burns when the thing you cherish the most is taken from you. Certainly Alma, watching his precious child undo his precious work, must have felt the sting of irony. But he still prayed in faith.

In this story we also see beautifully portrayed the sheer, radiant, joyful power of the atonement. If Alma the Younger, the talented, slick-tongued, evil sinner can be redeemed, and in fact born again, to be the prophet who inspires and lifts his people, this atonement must be cleansing indeed. It must be able to penetrate the darkest recesses of our soul with its marvelous light and transform everything it touches. If Alma can repent, so can we. If Alma can remake his life into a thing of beauty with the Lord’s help, so can we. We don’t have to think it is too late, or the disappointment in our lives or our selves is too much. However big our weaknesses and faults, the atonement is bigger still. The Lord waits with outstretched arms to encircle us in the arms of his love. Who are any of us to think we are so ragged with regret that his cloak cannot cover us?

As readers we are able to hear the story of the angel coming to Alma the Younger from two perspectives. In Mosiah 27, we see it from the point of view of an objective narrator, but in Alma 36, Alma the Younger tells the story from his own perspective to his son Helaman. The chapter is written as a chiasm. Chiasmus is a form of Hebrew poetry whose focus and primary meaning is expressed at a center point. The center point of Alma’s rehearsal of the events is this, “O Jesus, thou Son of God, have mercy on me, who am in the gall of bitterness, and am encircled about by the everlasting chains of death(Alma 36:18).” This center point perfectly expresses the central focus of existence. Without the Savior we are in the gall of bitterness, for all have sinned and come short of the glory of God. Even the merest sin disqualifies us for entering God’s presence. From our need and yearning, we must come to that time when we call on the Lord, Jesus for his mercy. Indeed, we need that mercy and that renewal extended to us every day.

How significant that it is his father’s teaching that should have come to Alma in that most bitter of moments. Alma had laid a foundation of teaching in to his young son, Alma, and that knowledge came back to him at the critical moment. Alma’s obedience as a father played a part in blessing him as a petitioner to God.

When Alma the Younger cried out for mercy, mercy was extended. Then, “my soul was filled with joy as exceeding as was my pain!” The atonement is not a dark, heavy, painful thing. It is about joy-inexpressible joy. The Book of Mormon is about many who found that joy.

For some time, I've been gathering all the scriptural notations I could find that would indicate Alma the Younger's approximate age when we are first introduced to him.. My motivation for investigating this question has been "What difference would his age have made to the people of Zarahemla?" as he and the sons of Mosiah went about seeking to destroy the church. Clearly, a man who has maturity of years and is the son of the head of the church would be taken much more seriously than a rebellious teen-ager, or twenty-something guy, who seemed to be fighting against the establishment. Also, we know that change in ways of thinking is often more difficult for older men, illustrating even more strongly the miraculous change of heart experience by Alma the Younger. Thank you for your insight, Maurine.