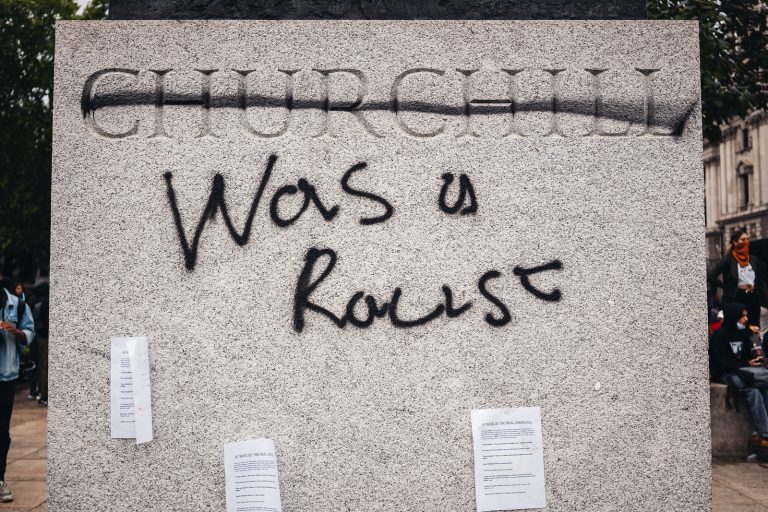 There I said it. I know many a soul will disagree with me, but before you start sending me hate mail, defriending me or making a voodoo effigy of me, please hear me out.

I feel comfortable saying I am not a racist.I was horrified by George Floyd’s death.I agree Black Life’s matter.But…this purging of our history by tearing down statues is misdirected and a classic example of political correctness dragging us down a ridiculous path.

First, allow me to take you on a short tour of London and then a quick debriefing. As Ralph Mc Tell wrote,“Let me take you by the hand and lead you through the streets of LondonI’ll show you something to make you change your mind”

Venue: Parliament Square
Time: The not too distant Future.
The tour begins:

“Welcome. This impressive square once housed many statues of statesmen. Sadly we don’t have many left to show you but please feel free to use your imagination.

That is just one section of London. You can repeat this exercise throughout the streets of the bulging metropolis, in its museums and galleries, and wipe out numerous public commemorations. Then repeat in Bristol (they have already drowned one slave trader statue), Bath, Edinburgh, Birmingham, Oxford, Cambridge. Can you even begin to imagine what would happen if we went international. What exactly would be left in Rome?

Sanitise our history and in the process you rip out the very struggles and challenges that make us who we are. Revisionist history can create ridiculous results if we are not prepared to put aside our modern thoughts and allow these statues to represent their times. You cannot and should not strip them of their historical context. They do not represent our modern thoughts. They were created by a different society, with different values, different priorities, and different beliefs. We are privileged to be quiet witnesses to their community decision to recognise someone for what they did – even if it was at the expense of others, even if it meant religious persecution, even if it included scandal and intrigue, even if it meant slavery.

Many statues were funded by public subscription or the government of the day, and in their eyes that person deserved recognition in all its glory and even in all its horror. Slave trading is not a uniquely black experience. Take a peek through history and you will find slaves all over the world throughout the centuries. Here in jolly old England many of our fellow Brits were rounded up and sold into slavery. The success of St Augustine’s mission to implant Christianity into England was preceded by Pope Gregory witnessing white, blue eyed English boys being sold in a Rome slave market and declaring “They are not Angles, but Angels.”Our ancient feudal system had aspects of abuse and slavery running all the way through it. British history is full of it! Which raises an awkward question.

Who, may I ask, is the authority figure to determine which slaves are more deserving than another. What is the magic date by which we determine which statue, street name, building name stays and which is rudely discarded.Who determines which cause deserves to be championed. If slavery suddenly trumps history then should we not give equal air time to every other cause under heaven. Where do you stop?

We do not have to agree with all their ancient views. Use their bronze statue, stone carving, plaque, street name, building name, scholarship, charity, legacy as a springboard for meaningful discussion. Do not stack them away in a dusty basement or melt them down. If we push them out of mind we undermine the great strides that have been made since they made their mark in history. They may be symbols of oppression, violence, and bigotry to us, but what did they mean to their family, friends and community?

I don’t want to point to empty plinths and empty space.

I want to visit Bristol, stand by the statue of Edward Colston and see the amazing contributions he made to the city… but then understand at what price.

I want to visit Oxford and see the statue of Cecil Rhodes. I want to hear of the impact the Rhodes Scholars have had on hundreds of lives… but then understand his Imperialistic outlook.

I want to see Blenheim Palace, Chartwell and the Cabinet War Rooms and view statues of Churchill to appreciate those finest hours when he made such an impact, but also knowing he had darker moments as well. Don’t we all.

I want to point to tangible reflections of the past. History is far more powerful when you have something to anchor on. Invisible history fizzles into oblivion…and then people forget.

There are many things we should never forget.

I am sorry but I cannot agree with this article. When we speak of slavery no normal thinking person would think of slavery in ancient history but they think of the terrible transatlantic slavery based on the colour of a person’s skin. As a result the past of some who were involved in this injustice needs to be examined. I am not suggesting the random destruction of statues is acceptable. I agree with the Mayor of London who has suggested the establishment of a commission to review statues in public places and if necessary organise their removal to a museum where their full history can be explained and understood. I think we need to recognise the pain the history of some of those we remember with statues causes our brothers and sisters. Reflecting on this may help us see things differently and behave differently as President Nelson has asked.

Overall I agree with the article. I believe it was well thought out and covered a vast majority of statues etc. It's hard to cover every single statue or monolith that has been raised into existence. Karen Weitz, is unfair in her personal assessment of the article. Each statue should be (and was) based on the ultimate achievements of the individual. If said individual has had a dark past all the more reason to keep them up. No one person is perfect except for the Savior and I don't see any statues to him on public grounds. If a monument or statue is identified as one that people no longer want, there is a Much better way of handling it than by mob rule. It's legal to gather information of said statue and asking people to sign a petition to have it taken down in an orderly and non-violent way. Period.