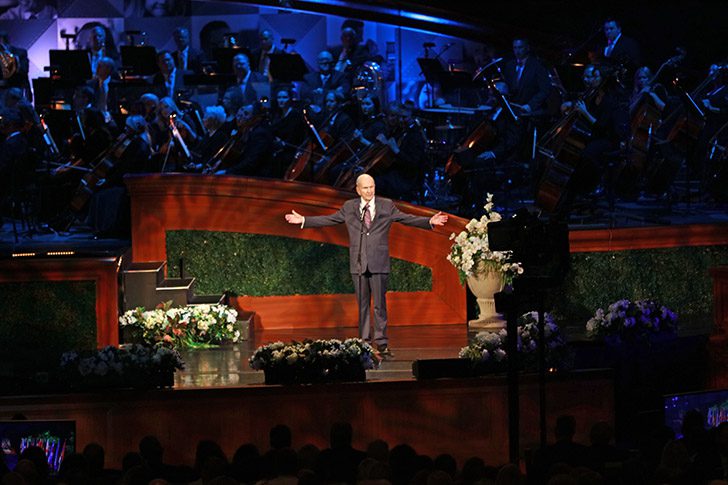 Has there ever been a more accomplished, energetic and loving 95-year old to celebrate than President Russell M. Nelson? Just when you think you might know something about his excellence and spiritual strength, the surprise is that there is more.

The birthday celebration is available for viewing at churchofjesuschrist.org

The Conference Center was packed when President Russell M. Nelson, and his wife Wendy, hurried in for the gala celebration of his 95th birthday. Such a 95-year-old, the world has rarely seen. Energetic, accomplished, and young, President Nelson had just returned from a week in Latin America where he had visited Guatemala, Colombia, Ecuador, Argentina and Brazil and spoken to thronging crowds. In fact, earlier when he had advised Church members to take their vitamin pills and fasten their seat belts to hasten the work, he could have been describing what it would take to keep up with him.

Where was the jet lag that should accompany such a recent trip, or the natural exhaustion that would accompany a 95-year-old? Simply missing. Our prophet is a wonder, and, when he had his turn to speak on the evening of his birthday party, his words deflected attention from himself directly to the love, purpose, and power that dedication to Jesus Christ brings into a life.

President Nelson called the night “a sublime celebration” and many from every walk of his life were on hand to wish him happy birthday. His counselors, President Dallin H. Oaks and President Henry R. Eyring, noted that his journey from doctor to apostle to prophet meant he had gone from saving hearts to changing hearts and that his role in life had been to be a heart healer.

The stage of the conference center was colorfully lined with the flags of 154 nations, representing every country where Church members live, which seemed very appropriate, given this prophet’s international reach.

Narrators Elder S. Gifford Nielsen and Ruth Todd noted, “Since you have been the prophet, a little over a year and a half, you have traveled over 90,000 miles, been in 28 countries and by our count have met with more than 100 world and religious leaders. You have spoken to more than one million members and friends in audiences all around the world.”

The 13 music numbers of the evening were performed by stellar musicians including The Tabernacle Choir at Temple Square, Jenny Oaks Baker and Family Four; Donny Osmond, GENTRI, Nathan Pacheco and the Bonner Family, but the surprise, not on the program, was a performance by President Nelson, who sat at the piano, and, with his perfect pitch,  played Chopin’s “Prelude in C Minor” on the piano.

A favorite moment was when one of the youngest Bonner children invited the crowd to join in singing Happy Birthday to the prophet, which the audience did with enthusiasm and ovations.

President Nelson as a Member of the First Presidency

President Oaks and President Eyring shared their candid comments about working with him as a leader:

President Eyring: “He has more love for people than almost anybody I’ve ever been around in my life. He’s just remarkable. Not only does he love us, he sees the best in us.

President Oaks: “He’s such a good listener to people. He is good at understanding the impact of decisions on a variety of different people, the young, the single, the married, the aged.”

President Eyring: “He is gifted at noticing when we need to postpone a decision to get more facts, but for the most part, when something comes before you, he decides it and we love that. Even in our schedules he moves things rapidly. “Why not now?” If we’re going to do it, let’s do it now.”

President Oaks: “One of the great things that I admire about President Nelson is the way he unifies people of different points of view and different levels of experience and maturity.”

President Eyring: “He finds the common ground. Whenever he meets people who may be very different from him in their religious or political beliefs, he has a feeling of you and I have more in common than we have differences.”

President Nelson in His Family

In the video featuring his family, President Nelson was remembered by various of his children this way:

“Often times he says, ‘There are twelve apostles, but you only have one Daddy.’

He’s never made us feel like he’s too busy to be our father. He and my mother worked together to make us feel really important.”

“One thing I am in awe about my mother and my father in how much they taught us without actually saying anything. The way they lived their lives, the way they taught the gospel in our home.  We learned love, we learned respect and how we want to be like the Savior and our number one goal is to return to live with our Heavenly Father.”

“I know my father was really busy, but I never really realized it. He had a great way of making time, and making us know that we were important.”

“To be around my grandfather is to be loved and just like you are the most important thing in the world to him.”

President Nelson’s remarkable achievements in medicine, noted narrator Ruth Todd, “expresses a deeper, spiritual impulse to seek and find that which is virtuous, lovely of good report and praiseworthy.” His medical colleagues noted:

In 1956, President Nelson worked in Minnesota on the forefront of technology as part of the team that created the heart-lung machine making open-heart surgery possible.

“When he came to medical school he would have been told that the heart is an organ that you don’t touch, but he recognized this is what we need, I’m going to do what I have to do to move the field forward.”

“He laid it upon himself as a challenge in an attempt to help others. When he came back to the Utah in the 50’s, Utah became the third state in the nation to have open heart surgery. It had such an impact.  Somebody could get a heart valve replaced who would otherwise die. A child could live who would otherwise die. These are profound things. He was part of the development that we today take for absolute granted.“

“Being a part of that original team has to be considered a major accomplishment.  He is a master surgeon and his results were phenomenal.”

“The thing that Dr. Nelson is most noted for within the academic environment is that he was a trainer for future heart surgeons.  He was a born teacher. He loved to teach.”

“I’ve heard many people say there was a different feeling in his operating room. He never was degrading but wanted everyone to know they added an important part.”

“There are high stakes for a new surgeon in an operating room. Dr. Nelson had a way of calming you down. If you made a mistake, he would carefully explain how you did it wrong and what a better way would be.”

“He was a great scientist, a phenomenal clinician, but he always carried with him that aura of being the man who had faith. I think he projected that to his patients, that confidence to put his life in his hands. For us, as physicians and surgeons, the Dr. Nelson piece we don’t separate from the President Nelson piece. We look to him and the way that he’s conducted his life, the way that he is a physician and a surgeon, we strive to be like him.”

President Nelson as a Spiritual Leader

Elder M. Russell Ballard: “When Russell Nelson and Dallin Oaks were announced to be members of the Quorum of the Twelve Apostles, I thought, we have just sustained future presidents of the Church. That was the feeling I had, because I knew the depth of Russell M. Nelson.”

Elder Jeffrey R. Holland: “When Russell Nelson came I think everyone was wondering what is he going to be like? What are his characteristics? I could have told them that it would be characterized by love…

“He talks to kings, he talks to prime ministers, he talks to everyone with that same spirit, and part of it is that he is so desirous that they will feel God’s love for them and he does that in a way that they just know that here is God’s prophet.”

Elder M. Russell Ballard: “When we were in Rome before the dedication of the new temple, we had the opportunity to have an audience with Pope Francis. I was fortunately to be his junior companion. The shaking of the hands between President Nelson and the pope, there was almost immediate sense of brotherhood.”

Elder Gerrit W. Gong:”For me an example of how Pres. Nelson believes on such a deep personal basis was in Samoa. The plane landed and the distance from the airport to the residetce of the head of state was 17 miles and there was a fairly large crowd as the car came out of the airport. What we didn’t expect is that the people would line the street for those 17 miles . What was remarkable to me was that Pres. Nelson leaned out the temple and waved at every single one of them.”

As the program concluded President Nelson mentioned his wife, Dantzel and two of his daughters who had passed away, smiling that maybe “they received a hall pass to witness this event tonight.”

With thank you’s to so many whom he loved, he concluded, “Every day I thank my Heavenly Father in the name of Jesus Christ for the gift of life and the privilege of serving His children. On occasions past when my mortal life was in great danger, they intervened with help that only they could have delivered. Jesus, the Christ, is literally my Savior, my Redeemer, my Exemplar and friend.

“In this celebration tonight, efforts have been made to depict the influence of the Lord in my life. From my earliest childhood to my most recent miraculous experience, I acknowledge timely and generous help from the heaven. In retrospect, I can see things now that I could not see at the time.

“I not only know that God lives, that He loves His children. He wants us to have joy, choose to return to His holy presence and receive the blessings, all the blessings that He has in store for His faithful children.

“If I’ve learned anything certain in my 95 years of life, it is that Jesus the Christ is the Son of God. This Church has been restored in these latter days to prepare the world for the second coming of the Redeemer.  He provides the doctrine, covenants and ordinances that enable families to be perpetuated beyond the grave. He is the light and the life of the world. Only through Him can we reach our divine destiny and eventual exaltation. My message to the world is simple and sincere. “ Many of those who wished President Nelson happy birthday added the phrase “and many, many more.” That may not always be the case with a 95-year old, but with President Nelson the wish seems apt. For the example he is to us all, we wish him Happy Birthday and many, many more.

I believe that President Hinkley would fall into that category also. Thank you for what you do.