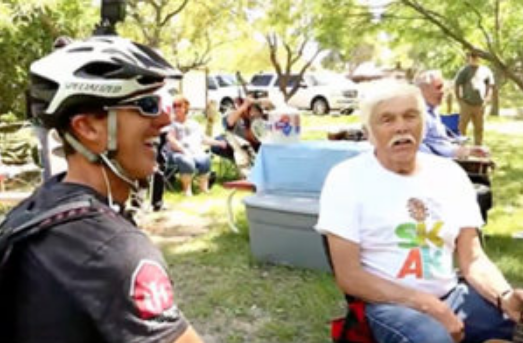 Though the LDS Church remains politically neutral in terms of party affiliation, its leaders have urged members again and again to become active participants in the political process in the various places where they reside.

As recently as March of this year, the First Presidency sent out a letter to members of the Church in Utah encouraging participation in the various caucus meetings around the state and even requesting that no Church meetings take place on caucus day so that members would have no excuse not to attend.

“It is important to remember,” read the letter, “that engaging in the election process is both a privilege and a significant responsibility.”

Jared Fisher, an LDS husband, father and business owner from Las Vegas, Nevada is taking that significant responsibility to the next level. Though he has never previously run for public office, Fisher is running to replace Brian Sandoval as the Governor for the state of Nevada.

In addition to being the parents of four children, Jared and his wife Heather are the owners of Las Vegas Cyclery and Escape Adventures bike tours. With cycling as his lens on the world, Jared decided to ride 1400 miles across the state of Nevada in an attempt to better understand the people of the state and the issues he might be tasked to help solve.

“Except for Las Vegas and Reno, Nevada is extremely rural,” said Fisher, “I thought it would be important as a possible Governor of the State of Nevada to be able to understand not just the big city, but what these people are going through in their smaller communities.”

Fisher said he was pleased to find that the people he met in towns and communities across the state were very willing to speak with him and share their experiences. “People are going to be pretty honest with you when you’re rolling in on a mountain bike,” Fisher remarked. That was his goal, to roll in and just hear from the people of his state in this expedition that he dubbed, “The Listening Tour.”

As many of us consider our talents, experience, interests and skills, we may conclude that we aren’t on an obvious path to political participation. But the impressive thing about Fisher’s approach to this ambitious pursuit of the Governor’s seat is that, rather than changing himself to be who he imagines a politician should be, he is working towards his goal by being exactly who he already is; helmet and all.

“You’ve got to be true to who you are,” he says. For Fisher, being true to himself also means being open about his belief in God and his gratitude for his membership in The Church of Jesus Christ of Latter-day Saints.

Whether we are raised in the Church or join later on, there comes a time for everyone when they must decide whether they will be fully committed to the Gospel. For Fisher, that time came in his early twenties. He didn’t grow up particularly active in the Church, but when he enrolled in the University of Nevada, Las Vegas with no family or friends nearby, he saw the on-campus institute of religion as a way to at least meet a few good people.

One of the very first people he met in the hallway was the woman who would later become his wife. “She was so strong in the Church and…a really good example of how I wanted to someday raise a family.”

The Gospel quickly became as crucial in his life as it was in hers. Those values she brought back into his life and the things the Church teaches are something we’ve lost in government, says Fisher. “People are afraid to speak up about it. I’m not.”

That is not to say that standing up for morality means bringing a state where 25% of the economy comes from gaming in direct harmony with the commandments. But Fisher says, “I’ve built my relationships over the past quarter century on doing the right thing, having good ethics and good values. People know me for that.”

He hopes a few more people will get to know him for that.

Though following the admonition of the Brethren to become engaged in the political process won’t mean that every member of the Church runs for political office, Jared Fisher is a good example of the way that by being exactly who we are, we can contribute something, connect to someone and make a difference.

I grew up in Reno and love the state! You have my best wishes for a successful campaign to become the next governor of Nevada!