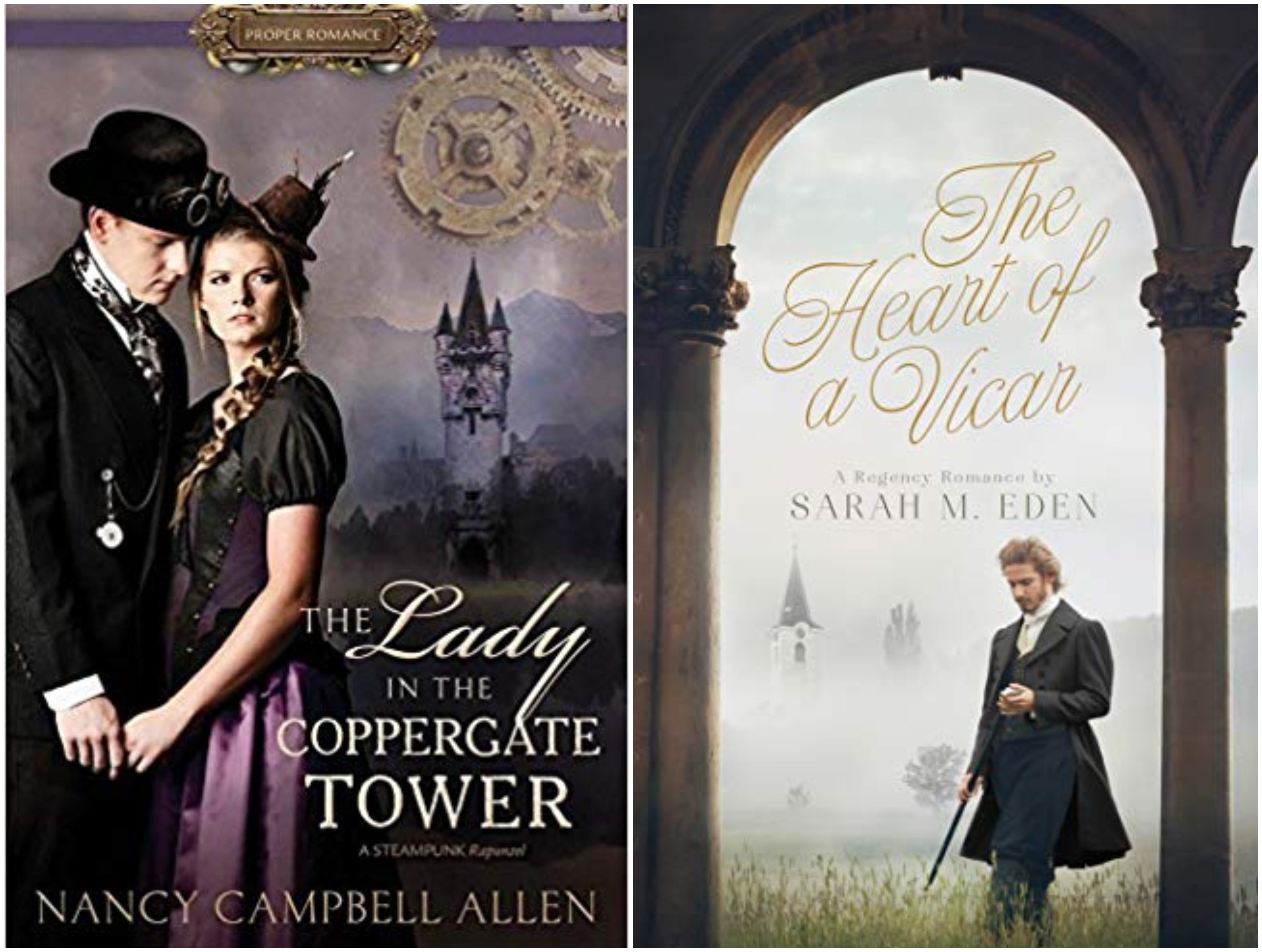 Two well-known and much-loved authors have added new and unusual twists to their best-selling repertories. Nancy Campbell Allen, author of a number of great historical novels, has written her third steampunk novel which meshes suspense, regency romance, and a fantasy form of science fiction together. Sarah Eden continues her Jonquil Brothers series with a Regency novel featuring a vicar.

THE LADY IN THE COPPERGATE TOWER by Nancy Campbell Allen

Nancy Campbell Allen’s newest novel, The Lady in the Coppergate Tower, is her third foray into the world of Steampunk fiction. Steampunk is a fiction genre that is part fairy tale, part historical, and part science fiction. Fantastic steam powered machines are an important element of the stories and give them a modern feel. Frequently, as in Allen’s novels, there’s a healthy chunk of romance thrown in as well.

The Lady in the Coppergate Tower  is set in Regency London and features Hazel Hughes who works as an assistant to Doctor Sam MacInnes. She has a strange ability to heal the sick.They’re interested in each other, but don’t act on their feelings because they come from different social classes. A Romanian count arrives in London and shows a particular interest in Hazel. From him she learns she was adopted by the woman she knows as her mother and that she has a twin sister back in Romania. He persuades her to travel to Romania to help her sister whom he claims is ill. Sam doesn’t trust the count and insists on accompanying them.

As they travel Hazel and Sam learn more about the situation and their distrust of the count increases. Once they reach Romania they learns lives are in danger and a Rapunzel-like princess is locked in a tower guarded by the count. Separated, they must struggle to save each other and the lady in the tower.

The characters are as much a mixed bag as the genre itself. They’re interesting and likable, but  a mixture of modern and regency era people. The submergible ship they travel on to Romania is a marvel beyond any real steam powered wonder during the Regency era. There’s a touch of magic in Hazel’s healing power and enough references to vampires to give the story a fairy tale twist. Allen covers all of the required bases for this odd genre and creates a story that is fun, intriguing, and romantic.

Nancy Campbell Allen has been writing for the LDS market for twenty years in which she has published fifteen novels and numerous novellas. She has won awards for several of her works which range from serious Historicals to contemporary romance. She received a BS in elementary education from Weber State University. She with her husband and children live in Northern Utah.

THE HEART OF A VICAR by Sarah M. Eden

The recent release of Sarah M. Eden’s seventh volume in the Jonquil Family Series is Harold’s story. Harold one of the younger brothers has been nicknamed “Holy Harry” by his teasing older brothers because of his desire since childhood to become a vicar. Now an adult and vicar of the local parish, he faces discouragement because of the many expensive repairs that need to be made to both the church and the home provided for him. He faces doubts concerning his ability to be the perfect, by-the-book parish vicar he believes he should be. Perhaps the greatest cause of his discouragement is the loss of his adolescent love whom he has never been able to forget.

Sarah and her brother return to the family estate after six or seven years in America. He, to prepare to take over the estate from his ailing uncle, and she comes at her brother’s request to assume management of the house. To her surprise and disappointment she is treated rudely and in a cruel manner by her uncle. She isn’t anxious to resume contact with Harold since he broke her heart before she left for America. As an adult she can see he is hurting in some way and has lost his enthusiasm for the work he wanted all his life to do. As they become involved in family and community problems old feelings resurface and they need to discover  what they really want and the direction their futures should take.

Those who have been following the Jonquil brothers’ escapades will love this brother, too. He’s not exactly the sedate, sanctimonious vicar he tries to be. Though discouraged and down on himself the reader is able to see his underlying character. Identifying with Sarah is easy. She’s a people person who puts others first. Eden has a knack for creating characters modern readers can relate to while at the same time keeping those characters squarely in their time and place. Even the servants in this book take on individual characteristics and pull the story closer to the reader. Eden also has the Regency time period down exactly. Throughout the story significant growth  in the main characters takes place and is woven nicely into a plot that builds appropriately to a satisfying conclusion.

Sarah M. Eden is tiny in stature, but gigantic in talent. She not only has made a noticeable impact on LDS fiction, but is a USA Today  best-selling author. She has a bachelor’s degree in research which shows in her historical novels. This award winning author lives in Northern Utah with her husband and children.

THE HEART OF A VICAR by Sarah M. Eden, Published by Covenant Communications, 269 pages, soft cover $16.99. Also available on CD and for eReaders.