LDS Fiction: Getting into the Heart of Ruth | Meridian Magazine 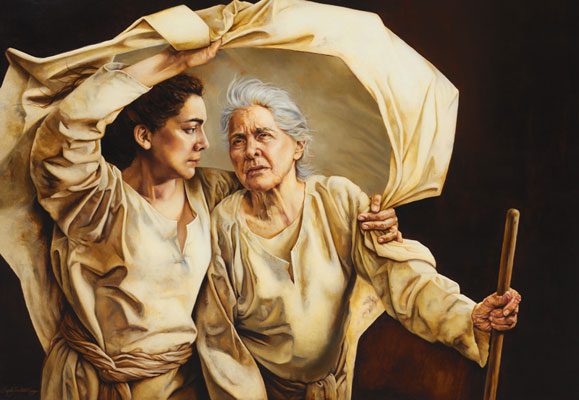 LDS Fiction: Getting into the Heart of Ruth

Cover image: “Whither Thou Goest” by Sandy Freckleton Gagan

Since I was about twelve I’ve probably read a dozen or more books based on the story of Ruth found in the Old Testament. Some were better than others, of course, but some left a lasting impression, giving new versions a difficult challenge to meet in order to measure up. There’s something about the story that has always intrigued me. Whether it’s the picture of a young woman’s religious conversion or her willingness to leave all that was familiar to follow her mother-in-law to a new land, or perhaps the hint of a romantic love story, I don’t know, but it’s a story that resonates with me.

When I picked up H.B. Moore’s new book, Ruth, I eyed it with some trepidation, hoping I wouldn’t be disappointed since I admire and respect her talent, but few versions of Ruth’s story measure up to the one I read years ago written by an unknown author and found in a tiny Montana library. Moore didn’t disappoint me, though her Ruth is very different from the one I’ve loved so long. This story of the Moabitish woman who married two different Hebrew men rings true, is filled with drama, exemplifies faith and loyalty, and is a great story.

The basic story is familiar. Naomi, her husband, and two sons leave Bethlehem during a severe drought to make a new home for themselves in Moab. Naomi’s family are devout Hebrews and Moab is a pagan country where Baal and Chemosh are worshipped. The two sons take Moab girls as wives. The young husbands and Naomi’s husband die, leaving the three women widows with no means of support. Naomi decides to return to family in Bethlehem. One daughter-in-law decides to return to her family, but Ruth refuses to leave her mother-in-law or give up the religion she has adopted. She accompanies Naomi to Bethlehem where she gleans grain in Boaz’s field to support Naomi and herself. One night during the harvest she sleeps at Boaz’s feet and covers his feet with her cloak. Gideon is next-of-kin and is obliged by Hebrew law to offer her marriage if he desires. He refuses and she marries Boaz. In time their direct descendant is King David and through his lineage Jesus Christ is born.

Moore places the family on the outskirts of a village where they are doing well and raising sheep until rustlers steal part of the herd and seriously injure the brothers. The local council and village healer are only interested in the money and property they can charge for their nonexistent services. Naomi’s husband died earlier from an illness and the two young husbands die from their injuries. The local leaders confiscate everything of value, leaving the women destitute.

Boaz has his own trials. His wife runs off with a caravan man to become an idol priestess, leaving behind him and their young daughter. They move in with his parents and he immerses himself in work. The young widow who accompanies Naomi back to Bethlehem interests him, but he’s unwilling to get involved with a woman from Moab who might revert back to worshipping idols. Besides she was unable to give her husband, Boaz’s cousin, a child and he needs a son to inherit his property and carry on his family’s name.

The story follows the basic outline of the biblical version, but Moore explains some of the customs and rules of the Hebrew people of that early time period which strengthens the story and makes sense of some of the characters’ actions. The main characters are strong and appealing. Even the minor characters are easy to see as real people. The story outline is set, but the author’s addition of logical explanations and realistic background information make an old story fresh and new. There’s a simple brilliance to Moore’s writing style that will appeal to teens and adults who enjoy scriptural stories, historical fiction, and those who enjoy a tender, low key love story.

H.B. Moore is the name Heather B. Moore uses for her historical novels. She writes in several genre’s and is recognized by USA Today as a best-selling author. She attended Cairo American College in Egypt, the Anglican School of Jerusalem in Israel, and earned her bachelor’s degree from Brigham Young University in Utah. She is a wife and mother. She and her family live in Utah.