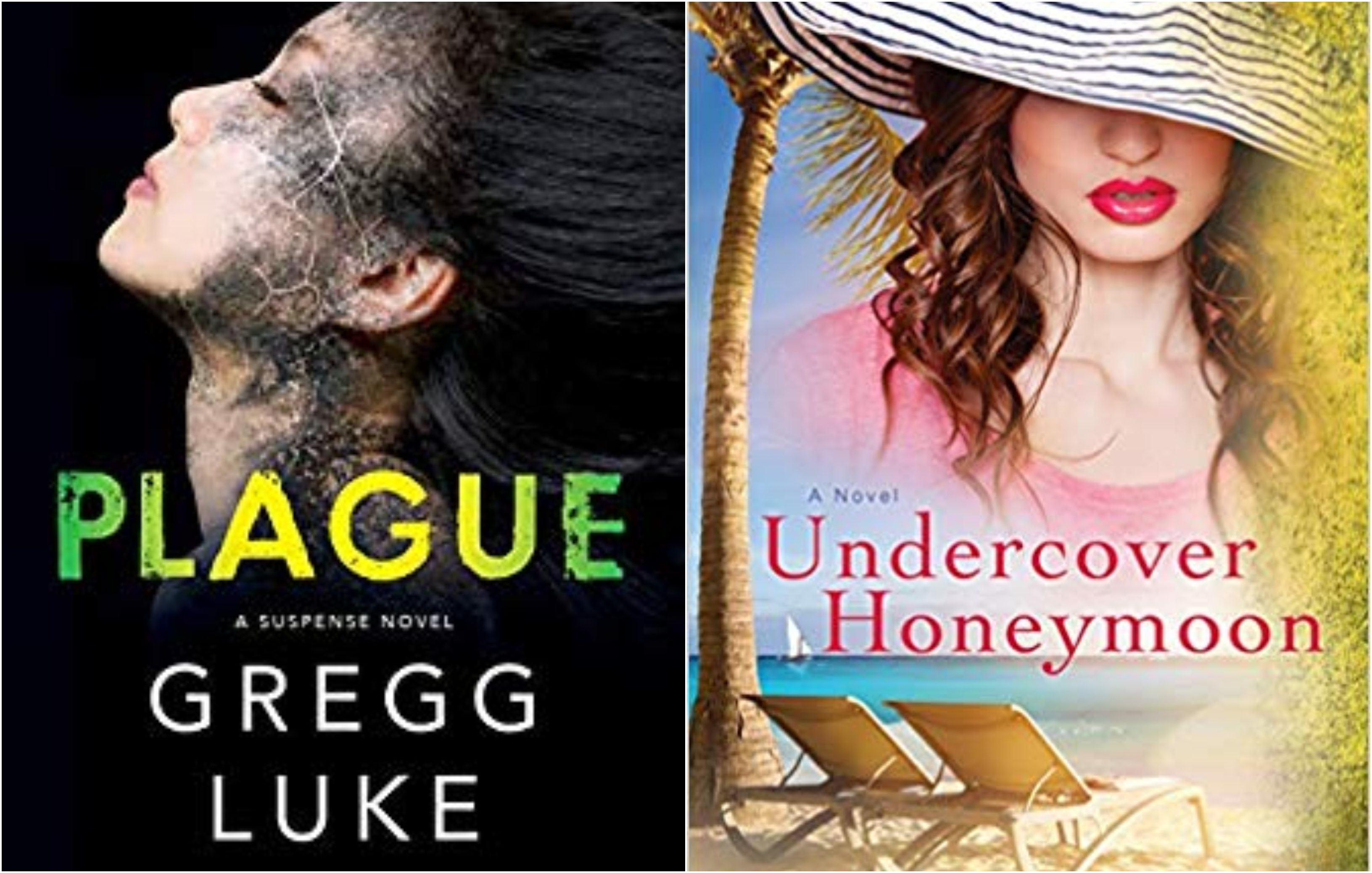 The books I’ve chosen to review today don’t fit the usual mold. They’re well written, hold the reader’s attention, but fall into the “love ’em or hate ’em” categories of those who read them. Plague by Gregg Luke steps all over many people’s pet climate and social theories and is liberally sprinkled with big words no one can pronounce and which break the flow of the story. Still, I loved it.

Undercover Honeymoon by Kari Iroz tackles a serious case of international smuggling, identity theft, and FBI corruption with silly childishness, goofy dialogue, unreasonable spats, and too many “nick-of-time” coincidences, but it’s hard to put down. The background facts in both stories are well documented. The authors are both award winning favorites. It will be readers who will decide if one or both of these books are to be loved or hated.

Professor Mitch Pine makes a startling discovery concerning the great epidemics of the past. Preceding each one was a period of environmental change. Convinced the climatic changes occurring in today’s world herald the beginning of another, perhaps greater, crippling plague, he prepares to turn over his research to the Centers for Disease Control in Atlanta in hopes of saving lives. On his way he is waylaid by Kiana and forced to follow the itinerary of her boss or Mitch’s assistant, Suko, will be tortured and killed. Kiana takes him to various places where he learns how ice bergs, volcanoes, art, ancient legends, and even NASA play a role in verifying his research. It also adds another dimension, giving him the key to predicting when the next plague will occur. Meanwhile Suko isn’t faring as well. She’s subjected to pain, darkness, and experimental surgery. She’s a fighter and finds her way around the old man, Edgar, who heads the sadistic plan to eliminate most of the world’s population and build a new society his way and the equally sick doctor who experiments with live prisoners. Mitch must outsmart his captors to free Suko and prevent global devastation.

Luke always creates believable characters and the characters in this book are no exception. Even the bad guys are real. To begin with Mitch seems a little wimpy and Suko is one of those women who needs to shut her mouth more often, but as the story progresses their ability to exert self-control increases so gradually the reader is almost unaware of their growing strengths. No matter which side of the climate change argument a reader supports the facts presented in the story will cause some serious consideration. Some will see the ending as too easy while others will find it an opening for another thriller.

Gregg Luke, RPH, was born in Bakersfield, California, grew up in Santa Barbara, California, and now lives in Logan, Utah. He served a mission for The Church of Jesus Christ of Latter-day Saints in Wisconsin. He has degrees from SBCC, UCSB, and BYU. He completed his pharmacy degree at the University of Utah.

Wedding plans are underway. Jacklyn “Jack” Wyatt and Damon Wade have had to postpone their wedding for six months, but now the time has finally come. The dress gets lost. Jack’s mother plans a party more elaborate than the wedding. The best man merely drops in for a few minutes. Finally they’re off for a week long cruise. The first two days are wonderful, then Jack discovers Damon, her new FBI agent husband, has been keeping a secret from her. His insistence on planning the honeymoon, picking a particular ship and date, preparing a detailed itinerary, etc., are all part of an agency op. Someone, probably more than one someone, on the ship is using their position to smuggle criminals into the United States.  Jack and Damon have a major fight over Damon using their honeymoon for a cover without telling her. Eventually she decides to help him and ends up creating a major catastrophe which forces them to flee the ship. Damon is accused of being an informant and his own fellow agents attempt to arrest him. Now they need to protect themselves and prove Damon’s innocence. The only person they can turn to for help is a former criminal who has her own reasons for offering assistance.

I’m not sure I can classify the characters in this story as realistic or believable, but they are interesting. Jack drifts off into some la la dreamland at every turn. She’s more like a spoiled four-year-old than a mature woman in her twenties. Though she’s intelligent, both her feet and her mouth are clumsy. Damon is generally level headed and more believable than Jack. Her family members are a bit weird and so is the criminal who offers to help them.

Both the Salt Lake and cruise backgrounds are well done. After the first few chapters, which are stuck in wedding mode, the plot moves at a comfortable pace. The author handles an intricate crime ring with legal and logistic finesse. Those looking for a comedy will love the scrapes and snappy come backs. They may find it difficult to enjoy the intense intrigue as much. Those looking for an enthralling mystery/suspense story will certainly enjoy that part of Undercover Honeymoon, but may be turned off by pages and pages of wedding dress details and childish imaginings.

Kari Iroz writes both comedy and speculative fiction. She is married and the mother of three girls. She has been a Whitney finalist twice.