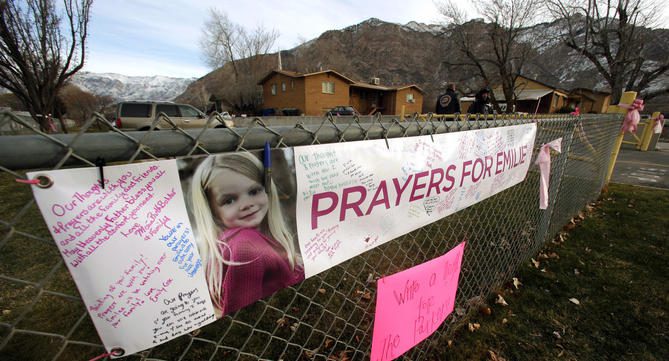 Emilie Parker and her classmates would be too old now to attend the new Sandy Hook Elementary School, which will opened its doors on Friday. In December 2012, Parker was a first-grader at Sandy Hook Elementary in Newtown, Connecticut, when a gunman entered the school, taking the lives of Parker, 19 of her fellow students and six of the school’s employees.

At Parker’s funeral, Elder Quentin L. Cook of the Quorum of the Twelve Apostles for The Church of Jesus Christ of Latter-day Saints spoke and simply stated what members of the LDS Church believe about the death of little children.

“Our doctrine is clear,” Elder Cook said. “Emilie is safe in the Celestial Kingdom of heaven.”

Emilie’s parents, Robbie and Alissa Parker, have since been inspirational figures in the wake of such a terrible, life-altering tragedy.

“I am understanding the principle that she’s away, but she’ll never be gone,” Alissa Parker told the Deseret News’ Lois Collins a year after the tragedy. “Emilie’s a presence we feel often and she feels very much still part of our family. What a blessing to have that surety and knowledge.’”

With this faith in their daughter’s safe keeping, the Parkers, an LDS family with ties to Utah, chose not to remain silent, but instead to let their voices be heard.

Robbie Parker was one of the first parents to address the media following the tragedy.

“He expressed no animosity, said he was not mad and offered sympathy for (the) family of the man who killed 26 people and himself,” the Associated Press reported following the press conference. “To the man’s family, he said, ‘I can’t imagine how hard this experience must be for you.’”

According to Alissa Parker, “evil did not win.”