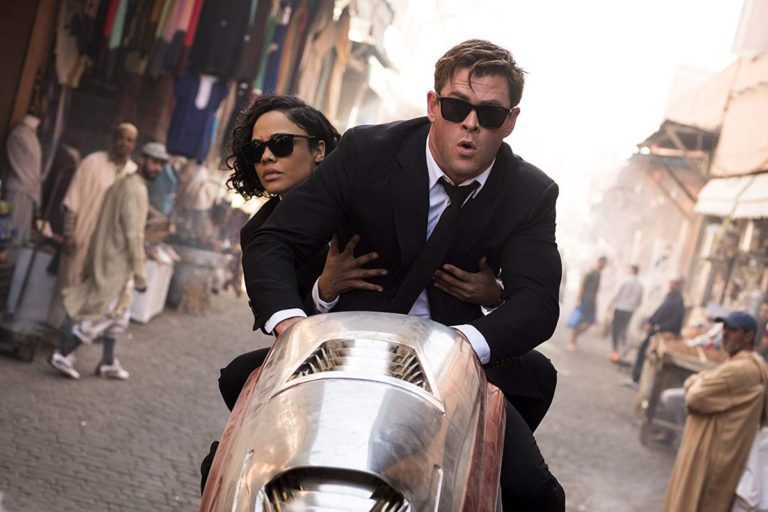 Latter-day Saint Movie Review: What to Expect from “Men in Black International”

If you’ve been a fan of this creative, fun franchise for years, you’re probably excited to see another one, after waiting 7 years since the last installment.  The film is getting mixed reviews, but this fourth installment in the intergalactic kegger that is Men In Black is full of new and delightful creatures, cool gadgets, plenty of action, and some respectful nods to the past movies that fans will enjoy.  It’s the only movie in the franchise to not be directed by Barry Sonnenfeld.  Instead, F. Gary Gray takes the director’s chair on this one.

If you enjoyed watching Chris Hemsworth and Tessa Thompson together in Thor: Ragnarok (Theatrical Version), you’ll get a kick out of seeing them wear the black & white suits of the secret international government agency that deals with the scum of the universe.  They have great chemistry together.  The movie has a fresh take on the franchise in a couple of new ways: female agents and an international agency.

Liam Neeson! Chris Hemsworth!  Emma Thompson!   Tessa Thompson!  Kumail Nanjiani!  What a fun cast.  Emma Thompson, by the way, reprises her role as Agent O from Men In Black 3. Besides Frank the Pug, she’s the only former cast member who returns.  Sadly, she’s not in the movie very much but she’s awesome when she’s in it.  Tessa Thompson is relatable, smart, humble, capable, and stylish as Agent M (Her MIB watch is so cool).  It’s really HER movie.  Twin brothers Laurent & Larry Bourgeois have shown their tasty dance moves for years on YouTube before they won World of Dance and became more famous.  It’s so great to see their success which has now landed them in a movie!  Good for them!  We even get to see them dance a little bit in this film.

Rebecca Ferguson was so elegant and stunning in The Greatest Showman so it was disappointing that she didn’t have more screen time in this movie.  The wig and dress they put her in were both hideous.  What is hilarious is that she plays the role of an arms dealer and has three arms. haha. Chris Hemsworth spends the entire movie being goofy as people swoon all over him.  One of the aliens even says about his character, “He’s so yummy.”  There is a funny Thor moment when Chris Hemsworth stretches out his hand to reach for a hammer that will make you laugh out loud.

While that cast is great, it’s still disappointing that Will Smith and Tommy Lee Jones passed on this project.  Their first 1997 Men In Black was classic gold.  All of the sequels have never quite measured up, though they’ve still been entertaining enough. Unfortunately, this script is clunky and the plot doesn’t have the charm, wit, or memorable moments that the original Men In Black had. The humor falls flat often.

On the positive side, the aliens are always such a highlight.  Pawny is an adorable alien and has some of the best lines in the movie.  He was voiced by the talented Kumail Nanjiani.  When you see the young Tarantian in the beginning, you might worry that it’s going to be a Jar-Jar Binks fail, but it’s really cute.  Some of the CGI looked super fake and cheesy.  There were a LOT of green screen moments in this movie, but some of the visual effects looked great.

Rumor has it that they were originally going to do a Men In Black crossover with 22 Jump Street Can you imagine that?  What a messy combination that would be which would ruin it for fans of both franchises.

You can pretty much guess the ending by watching the trailer, so don’t watch the trailer!  If you want to eat movie theater popcorn and go somewhere with air conditioning with the kids, you’ll probably enjoy this.

There is some crude language with a few sexual references.  For example, a man and alien are seen in bed together.  Later, there is talk about how that worked.  There is some cleavage and a bare-chested man.  There is some name-calling (although often clever and entertaining), and 9 religious exclamations.  As you can imagine, there is a lot of destruction and fighting, resulting in the deaths of aliens and humans.  There aren’t any really scary monsters, but some “bad” aliens with glowing eyes, and another one that has a lot of tentacle-looking arms.  There is a bar scene with humans and aliens drinking alcohol and smoking.

This is yet one more female empowerment movie that your daughters will enjoy.  Emma Thompson and Tessa Thompson (not related in real life) have an amusing conversation about the relatively new addition of female agents when Agent O (Emma Thompson) proudly announces, “We are the Men in Black” and then Agent M (Tessa Thompson) questions her, “The MEN in Black?”  Agent O then sighs, “Don’t.  Don’t start.  I had that conversation.  It’s a process.”  Later, another character asks Agent M if she’s a queen and her response is, “Well, to the extent that all women are, yes.”

Evil can be defeated by truth.  Agent M is very interested in learning how the universe works and uncovering truth throughout the entire movie.  As Christians, we should also be searching for truth (John 8:32, 40, 44-46) and our daily prayer be “Lead me in thy truth, and teach me, for thou art the God of my salvation (Psalm 25:5, 10).  You can find dozens of General Conference talks about faith on two pages on the Church’s website at https://www.churchofjesuschrist.org/general-conference/topics/truth?lang=eng

Agent High T (Liam Neeson) tells her, “Just remember, the universe has a way of leading you to where you’re supposed to be at the moment you’re supposed to be there.”  Friendship, loyalty, love, and courage are strong themes as well.  If you see this summer blockbuster with your kids, be sure to ask them what lessons THEY learned from the movie!

Movie Review Mom:  Trina Boice teaches for BYU-I online and is an author of 29 books.  You can read more of her reviews at www.MovieReviewMom.com  You can hear her podcast “Daily Inspirational Quotes Hosted by Trina” on Amazon Echo devices and on Volley.FM.  She created several online courses at www.LifelongLearningEducation.com  and because she loves to travel, she created www.EmptyNestTravelHacker.com  You can see all of her books and win prizes at www.TrinasBooks.com  You can also find @TrinaBoice on Facebook, Instagram, Pinterest, and Twitter.