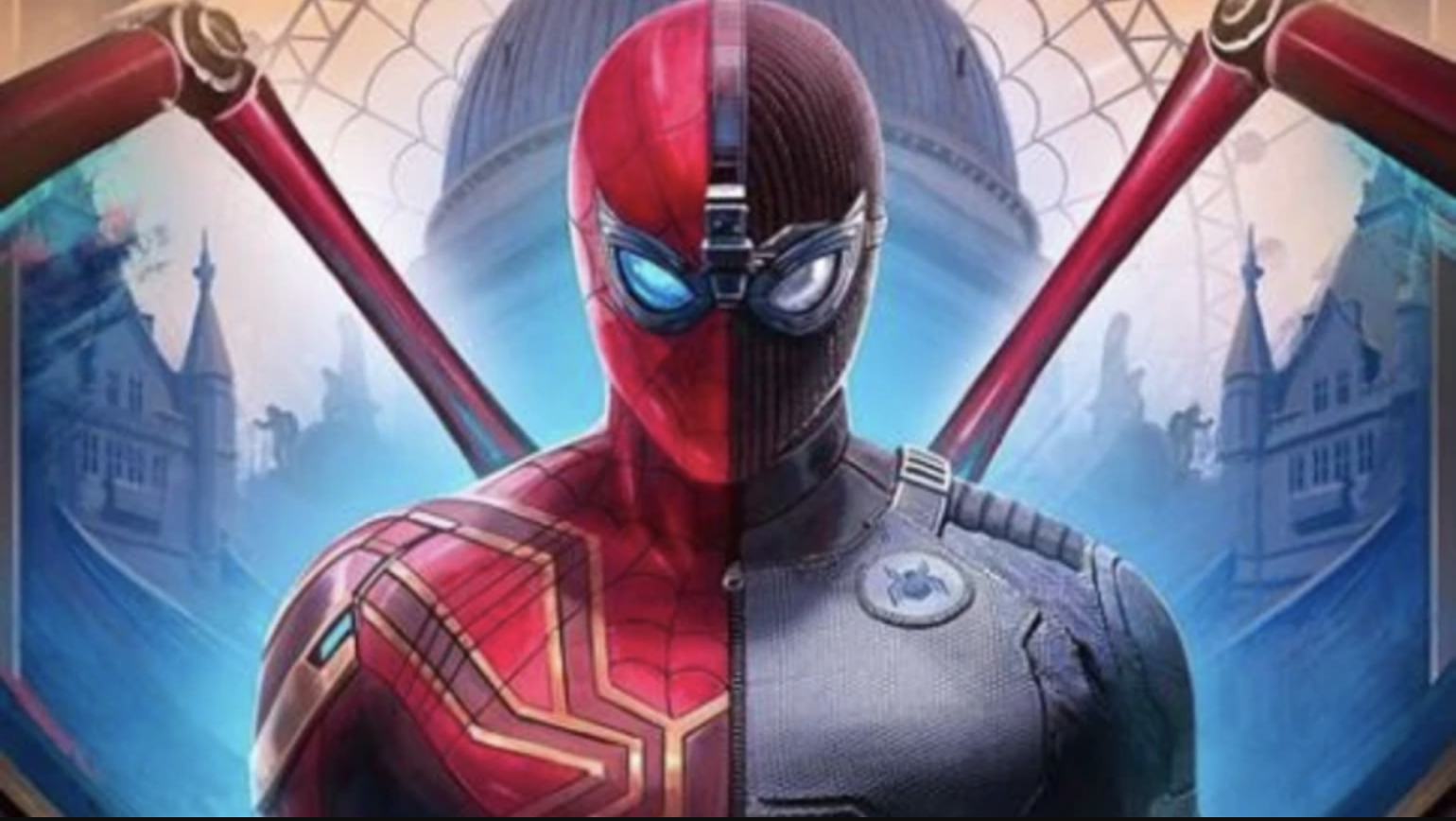 F.O.S Unite!  (Friends of Spider-Man)  Welcome to the post-Avengers Endgame world.  After the last two very dramatic Avengers movies, Spider-Man saves the day by giving us an easy, breezy, light and fun summer popcorn movie.  Spider-Man Far From Home is the final movie in the Phase 3 of the Marvel Cinematic Universe (MCU) and the sequel to the 2017 Spider-Man: Homecoming.  You really need to have seen Spider-Man: Homecoming and the last two Avengers movies to truly understand the depth of what’s happening with some of the characters and the timeline. You especially need to have seen Marvel Studios’ Avengers: Endgame because there is talk of the “blip” and what happened after “the snap.”

Tom Holland, who plays Spider-Man, recently said that this new movie is a “token of our love” to Robert Downey Jr. and his Iron Man character. Awww.  It really does feel like that. There is a cute and funny “In Memorium” at the beginning of the movie.

Peter Parker goes to Europe on a science field trip with some friends from school where he encounters new villains.  Stay sticky!

In a word, yes!  Marvel has quickly learned that audiences want wonder, action, a flawed hero, heart, and lots of humor. This movie has it all.  They have done a fantastic job tying all of their movies together and there are some fun Easter eggs for fans to look for.  For example, Peter’s suitcase has the letters “BFP” written on it, referring to his uncle Benjamin Franklin Parker.  Check out information on passports, license plates, other items, and quick references to other Marvel characters.

Tom Holland may be the best Spider-Man yet because Marvel truly embraces Peter Parker’s awkward teenage years and uses his naive enthusiasm to create a film with youthful energy.  Jake Gyllenhaal is awesome too and one of the most talented actors in Hollywood today.  Social Justice Warriors will love the diverse cast, which includes some actors we have seen in previous Marvel movies, such as Zendaya, Jon Favreau, Samuel L. Jackson, Cobie Smulders, Marisa Tomei, as well as some new characters that add a nice touch.  Unfortunately, Peter Parker and MJ don’t have a lot of chemistry together, but there are two other budding romances in this movie that are quite entertaining.  There’s a fun cameo at the end of the movie that I’m not going to ruin for you, but the audience I watched the movie with cheered the minute his face showed up on the screen.

If you loved Spider-Man: Into The Spider-Verse (it won an Academy Award last year for Best Animated film), there are scenes in this movie that have a similar comic book, multi-dimensional feel to them.  Most of the CGI and action sequences were great, although there are some definite cheesy moments where things like fire and a bus scene look fake.

You also get to see Spider-Man in a new, stealth suit, which looks like it should have some black ops special powers, but it’s not as great as you’re probably hoping.  The song choices were perfect and hilarious.  If you love to travel, you’ll get to see Mexico, Venice, the Austrian mountains, Prague, London, the Netherlands, and…Queens.

If you’re a TRUE Marvel’s The Avengers fan, you already know that you HAVE to stay in your seat in the theater and keep watching until the very END of the rolling credits.  I promise you’ll laugh.

There is some profanity and you probably won’t be surprised that it’s always uttered by Samuel L. Jackson.  There is also a crude reference to the “Peter Tingle” that will, hopefully, fly over the heads of young viewers, although it’s repeated quite a few times.  Someone hits a boy in the crotch and runs away.  A boy starts to undress in front of a girl…twice.  A boy flips the bird (the middle finger) at another boy.  A teenage boy gets invited to a bar, but he just drinks lemonade.  There is talk of a teenage boy watching an “adult” film.  And, of course, there is a lot of superhero violence, destruction, and people in peril.

Illusion vs. reality is a fascinating theme that is handled really well in the movie.  Talk to your children about ways we can know the difference.  Mysterio explains, “It’s easy to fool people when they’re already fooling themselves.”  Later, he adds, “People believe, and nowadays, they’ll believe anything.”

There’s an interesting conversation that Peter Parker and MJ have that reveals a growing attitude in American society today.  Peter sees MJ and says, “You look really pretty.”  She shoots back, “Therefore I have value?”  Young women have become great at standing up for their rights and yet have forgotten how to gracefully accept a compliment.  Women want men to be attracted to them but are often angry when outside appearance is mentioned.  We all need to do a better job of not being so offended by everything.  Elder Bednar’s 2006 talk “And Nothing Shall Offend Them” is a classic filled with great counsel about this prevailing attitude.

Another theme that is common in all of the Spider-Man movies is that of growing up and taking responsibility.  We’re used to seeing him learn that “with great power comes great responsibility” but this movie takes it to a new level.  In Iron Man’s absence, Peter Parker has to decide if he is willing or even capable of filling his shoes as a leader.  Nick Fury tells him, “The choice is yours.”  We all have to decide who we want to be and how we want to spend our time in this life.  The scriptures constantly remind us to choose wisely because our time in mortality is short.

Movie Review Mom:  Trina Boice teaches for BYU-I and is an author of 29 books.  You can read more of her reviews at www.MovieReviewMom.com and watch them on YouTube. You can hear her podcast “Daily Inspirational Quotes Hosted by Trina” on Alexa devices and on the Volley FM app.  She has some online courses for career & personal development at www.LifelongLearningEducation.com  Because she is a popular speaker in China and loves to travel around the world, she created www.EmptyNestTravelHacker.com  You can see all of her books and win prizes at www.TrinasBooks.com  You can also find @TrinaBoice on Facebook, Instagram, Pinterest, and Twitter.