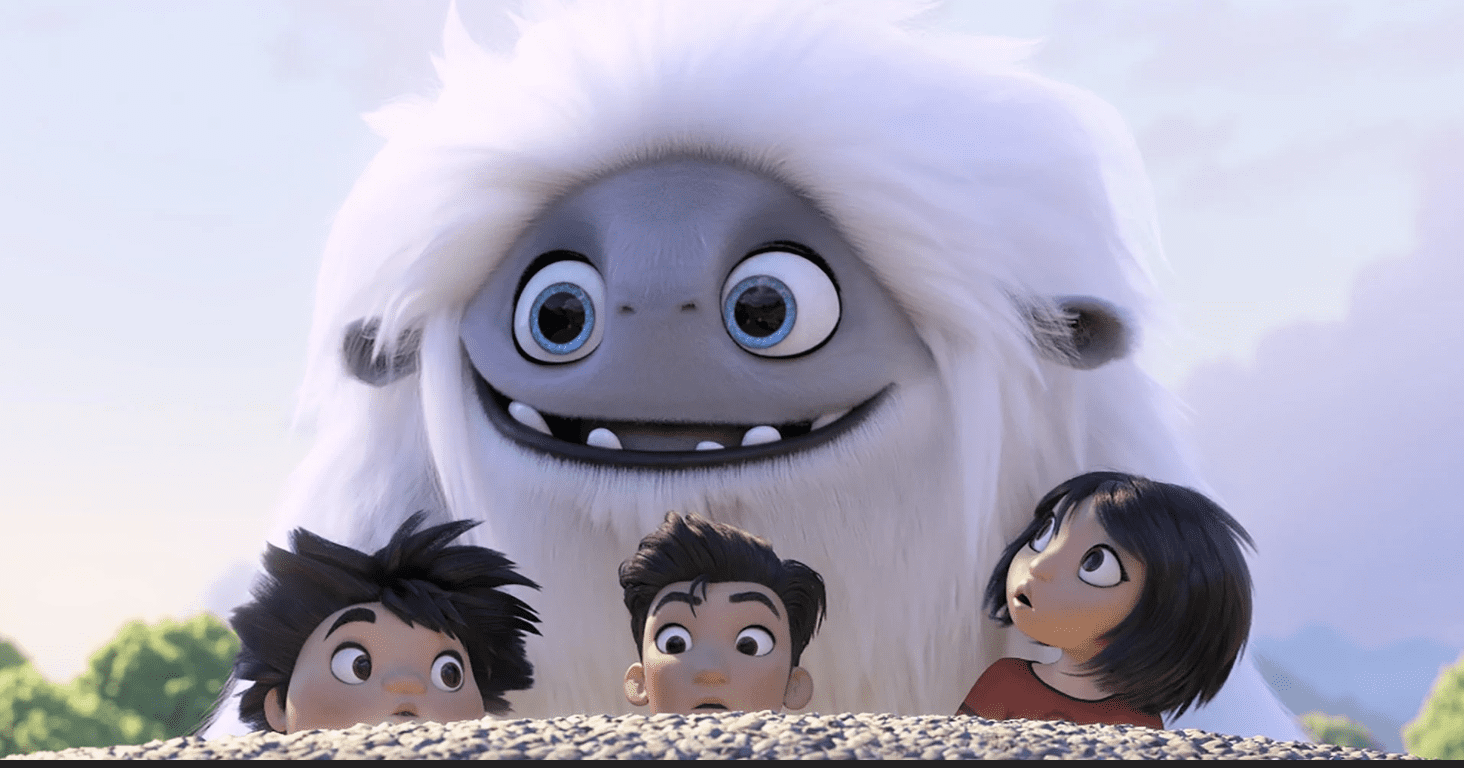 DreamWorks presents a beautiful and sweet animated film that features a magical yeti who takes some new human friends on a journey to his home on Mount Everest.  Originally, the movie was going to be called Everest.  The Abominable yeti looks like a mix between a fluffy, giant dog and a huggable bear.  He hums to music, conveniently understands English, and has a few magical powers.  In case you’re wondering if the yeti is a boy or a girl, the protagonist asked the same question. When creature belched loudly she said, “You’re definitely a boy.”  He’s definitely cute enough that kids will want one to snuggle with, so merchandising looks pretty promising already.

This movie is offered in 4DX at Regal Cinemas!  If you’ve never experienced that kind of seating, you’ll be amazed!  The 4DX seats jiggle you around to match the motion on the screen, just like you’re on one of those amusement rides at a theme park.  But wait!  There’s more!  They squirt water on you when there is water in the scene, although you’re allowed to turn off that setting if you don’t want to get wet.  But wait!  There’s more!  You can actually smell certain odors in scenes!  Haven’t you always wanted to smell movies?  All of that fun comes at a hefty price around $25, depending on which theater you go to.

The film is heartwarming, inspiring, and funny. The landscapes are stunning, whether the backdrop is crowded, busy Hong Kong streets or the beautiful scenery of China’s nature.  You’ll love traveling to those places virtually.  One of my sons recently married a lovely young woman from Hong Kong!  (In case you’re asking THAT question, no, he served his mission in Nicaragua.) The movie even incorporated the unique skyscraper light show they do there every night at 8:00 pm.

Another one of my sons and I got to see the world’s largest Buddha on one of my business trips in China, so I loved that it is also featured in the movie.  It’s amazing and HUGE!  You will definitely be swept away with the exotic allure of China in this colorful animation.  You can easily tell that this is a US-China co-production.  Their movie market is enormous and Hollywood has been trying to tap into it in recent years with special collaborations.  DreamWorks worked with Pearl Studio on this production to create a very authentic trip to Asia.   Those pork buns in the film looked delicious.

Music plays a big part of the story and magic. So sweet.  Music really is magical.  Your child may want to learn how to play the violin after watching this movie.

This is Sarah Paulson’s and Chloe Bennet’s first time doing voice acting in a theatrically released animated film. Yetis seem to be all the rage lately. The 2018 movie entitled Smallfoot came out exactly one year ago by Warner Animation group. It’s also about a yeti, but the story is completely different.  Less than a year ago, Laika released the movie Missing Link.

Now for a few flaws.  Some of the humor doesn’t always land; however, those whooping snakes made me laugh every time.  Most of the characters are pretty cliched and the story is quite formulaic, but co-directors Jill Culton and Todd Wilderman certainly know how to manipulate our feelings.  Not everything is explained well in the story, so just don’t let missing details bother you. The animation is very good, but a couple of things distracted me.  For example, Yi is very cute and adorable (the female protagonist) but her hips were unusually large.  Everyone also had gigantic shoes.

It always drives me nuts when trailers contain things that don’t actually end up in the movie.  For example, one of the earlier trailers featured a violin version of Fleetwood Mac’s song “Go Your Own Way”, but it wasn’t in the movie at all.

You might have to explain to young children that tranquilizer darts don’t kill an animal.  Some people and animals in peril, although the convenient magical powers tend to reduce the tension.  Adults and children will be equally entertained. It is definitely a family-friendly film with no profanity or offensive content.

Movie Review Mom:  Trina Boice teaches for BYU-I, is an author of 29 books, mother of 4 sons, and online instructor for Brigham Young University.  You can read more of her reviews at www.MovieReviewMom.com  You can hear her podcast “Daily Inspirational Quotes Hosted by Trina” on Amazon Echo devices and Volley FM.  She founded an online school and continues to create courses at www.LifelongLearningEducation.com  Because she is a popular speaker in China and loves to travel around the world, she created www.EmptyNestTravelHacker.com  You can see all of her books and win prizes at www.TrinasBooks.com  You can also find @TrinaBoice on Facebook, Instagram, Pinterest, and Twitter.