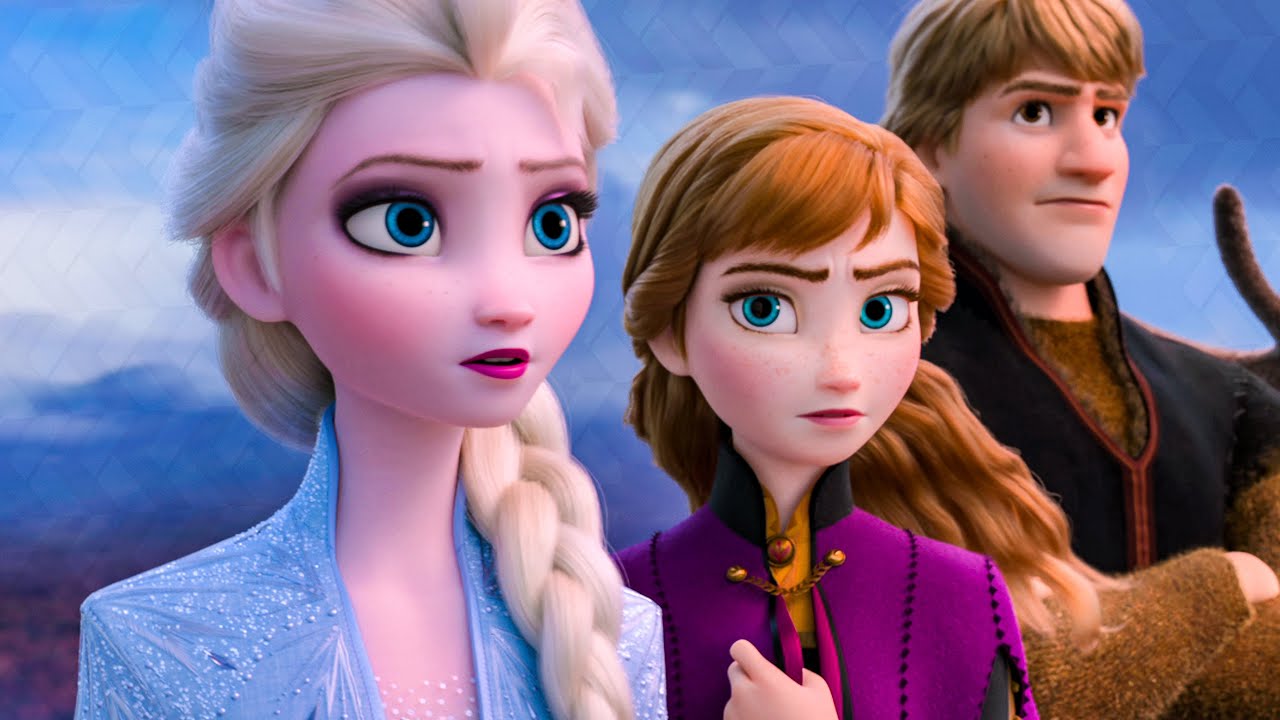 This sequel to the hugely popular Frozen (2013) has been highly anticipated by squealing fans…and me.  When the first trailer was released, it had 116,400,000 views within the first 24 hours, making it the most viewed animated trailer of all time.

Visually, Frozen 2 is stunning, as expected.  The story, however, isn’t nearly as charming as the first one, and even a little too confusing and mature for young kids.  The songs are often dark and complicated, but that certainly won’t stop everyone from attempting to sing them for the next 6 years until another Frozen movie is added to this cash-cow franchise.

First of all, the animation is GORGEOUS. We are getting so spoiled with incredible artistry in animation nowadays!  Idina Menzel belts it out just like we want her to as Elsa.  She’s so amazing.  Little girls will be attempting to duplicate the songs, Into the Unknown and Show Yourself for the next few years starting now.  Panic! At The Disco (with lead singer Brendon Urie) crushes the song Into the Unknown  during the end credits.  Wow.  What a powerhouse. That should have been HIS song all along.  Be sure to stay seated through the end credits to listen to that, as well as to see a very short clip featuring the snow monster from Frozen (2013) and the Snowgies from Frozen Fever .

The animation for water, especially, is amazing.  There is a super cool water horse named Nokk, who has a mane waterfall.  Wow.  A strong theme in the movie is that water has memory.  Check out Masaru Emoto’s fascinating study by clicking here. Somehow, Elsa and Anna look a little different in this sequel. As expected, there are super cute details in the animation, as well as a few respectful nods to Mickey Mouse (look for the shapes of various things).

Sadly, Anna isn’t cute, quirky, and charming like she was in the first film.  Instead, she’s paranoid and overwhelmed by everything, and her big song is rather dark and depressing.  Kristoff’s personal story was boring, and he is hardly in the movie.  His song  Lost in the Woods is done in a 1980’s style ballad, complete with images of famous 80’s rock bands Queen and Whitesnake.  It didn’t seem to fit with the rest of the movie’s style, although it was epic and hilarious.

You get to spend a little bit of time getting to know Elsa & Anna’s parents, as well as learn about their ancestry and Elsa’s powers.  Olaf does a funny impersonation of Elsa during their charades game and does a 30 second summary of the plot of Frozen (2013), which is pretty hilarious.  He shares a lot of “fun facts” and is the character who keeps things light in the film.  Unfortunately, some of the other characters’ jokes don’t always land.  We also get introduced to another adorable character, a little fire spirit salamander named Bruni.

The story is problematic and presents fractured plots for Elsa, Anna, and Kristoff.  For example, only minutes after saying, “Promise we do this together, okay?” they split off into separate adventures and apart for most of the movie.  The movie starts with a LOT of exposition and some obvious foreshadowing.  The villain gets a ridiculous small amount of screen time, which is odd for a Disney movie.  Critics say the movie doesn’t even have a villain.  Some fans say the ending is a strange let-down and even a little depressing.  Elsa’s magic takes her to surprising places physically and emotionally, although she always has the best dresses.  At one point, she “levels up” and has a gorgeous white gown with a colorful Aurora Borealis flair.

The strongest theme of the movie is spoken early in the movie by the troll king, “All one can do is the next right thing.” Later, it is spoken several more times and then Anna sings about that important principle.  You may have noticed that a lot of children’s animated films lately have dealt with validating emotions like being sad or depressed.  This movie takes it a healthy step further by explaining that it’s okay to feel those emotions, but at some point, we all need to just take that next step or make that next choice.

The theme of sisterhood and unity is as strong as ever, with love conquering all, just like a good Disney movie should.  Olaf says, I just thought of something permanent: love.”  Awwww.  The idea of working together is beautifully illustrated by a bridge that has two ends.  Taking risks and accepting change are also powerful themes.  At one point, Elsa states, “I can’t freeze this moment, but I can still go out and seize the day.”  That fuels the themes of hope and fear.

Much of the movie takes place in a forest that is shown as lovely and scary at the same time.  Reverence and respect for nature are emphasized in many ways.  The two sisters set off on their adventure in search for truth.  Like them, we need to search for truth, accept change, and have the courage to do the next right thing.