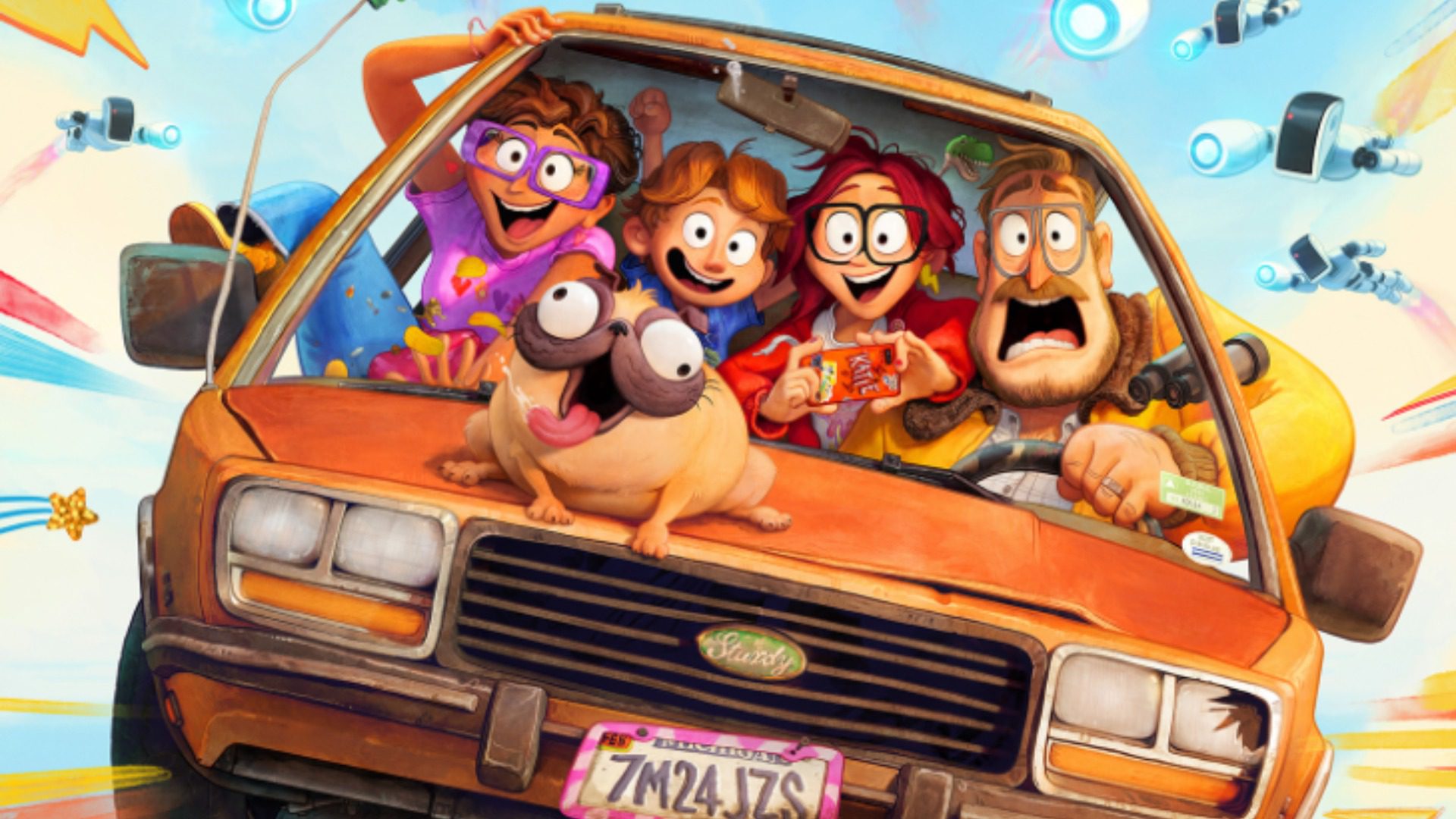 This animated family adventure by Phil Lord and Chris Miller is completely adorable and a contender for “Best Animation” for next year’s Academy Awards.

It’s about a quirky, dysfunctional family that goes on a road trip which is upended when they find themselves in the middle of the robot apocalypse and suddenly become humanity’s unlikeliest last hope.

It’s so much more than just that though.  There’s a lot to unpack such as lessons about family, self-confidence, Artificial Intelligence, social commentary on our dependence on our cell phones, and so much more.  The family-friendly flick was written and directed by both Michael Rianda and Jeff Rowe.

This hilarious movie is so inventive and fun.  The comedic beats fly fast and furiously. Every frame is entertaining and creative. Sony Pictures Animation has clearly learned from the many mistakes made in The Emoji Movie.  The influence of the award-winning movies The Lego Movie  and Spider-Man: Into The Spider-Verse can be seen in the style of this film.  This movie would have been so much fun to watch in a movie theater because the audience’s laughter would be contagious and energetic.  Due to the pandemic, it’s now available on Netflix!

The background designs and set pieces are detailed, rich, and hilarious.  The onscreen effects add another layer of richness and humor that is adorable and awesome.  I love the look of a 2D cartoon animation added on top of a 3D animation, much like what we saw in Spider-Man: Into The Spider-Verse  They look like the kind of effects Katie would add if she had made the movie.  There are tons of funny references to and social commentary on pop culture which are illustrated visually, as well as spoken by the characters.  The “fourth wall” is broken by one of the characters during one particular moment.  The fourth wall refers to that invisible line that separates the audience from the characters. When the character looks straight at the audience, she instantly lets the audience into the joke and reveals a new level of vulnerability.

The pacing flies at a brisk pace, except for in a few moments when old home movies are viewed to provide the sentimental foundation between the father and daughter as they struggle with their relationship.  Parents will definitely be able to relate to the evolving relationships they have with their children as they grow up.  This movie is entertaining and insightful for both adults and kids because of the humor and issues addressed.  The young son in the family is voiced by writer/director Michael Rianda who was probably trying to dip into voice acting like director Brad Bird did with The Incredibles. Unfortunately, Michael Rianda’s voice simply wasn’t the right fit for the son, Aaron Mitchell. His voice was way too old-sounding and it never had a comedic payoff.

The resolution of the story is pretty predictable, even though there are a couple of false endings.  Act 3 just keeps going and going.  Keep watching during the end credits to see pictures of the film’s creators with their families.  Nice touch.

This film is refreshingly wholesome and family-friendly with no profanity!  Yay!  Family weirdness is celebrated.  The entire film is family-centric and has a solid message about celebrating the unique differences and strengths in one another like in the movie The Incredibles.  The members of the family often feel misunderstood, but they learn to communicate better, have more self-confidence, and work together.  It’s revealed quickly in the last scene that Katie is a lesbian but her family easily embraces her choices.

Movie Review Mom:  Trina Boice teaches online at BYU-I, is a #1 best-selling author of 31 books, and a mother of 4 sons.  You can read more of her reviews at www.MovieReviewMom.com  You can hear her podcast “Daily Inspirational Quotes Hosted by Trina” on Amazon Echo devices, Volley FM, and on your favorite podcasting platform.  She’s an author coach at www.FromBook2Business.com  and she founded an online school and continues to create courses at www.LifelongLearningEducation.com  Because she is a popular speaker in China and loves to travel around the world, she created www.EmptyNestTravelHacker.com  You can also find @TrinaBoice on Facebook, Instagram, Pinterest, and Twitter.

Yay! I'm so glad to hear you enjoyed it! It's one of those hidden gems on Netflix. Thanks for your comments!

This movie was hilarious! My kids have watched it every day since we watched it as a family. My husband and I laughed through the whole thing. At the end, I appreciate that they weren't in your face about her being a lesbian. Just a brief mention of a potential girlfriend. Most kids won't even catch it. Mine certainly didn't.