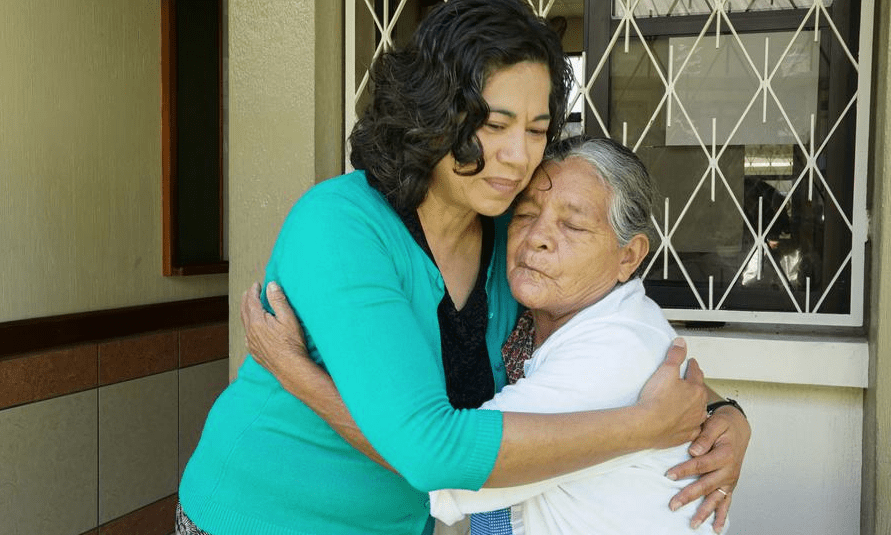 Members of the Relief Society and Primary general presidencies of The Church of Jesus Christ of Latter-day Saints met this week with survivors of the devastating June 3 eruption of the Fuego Volcano in Guatemala.

Sister Reyna I. Aburto, second counselor in the Relief Society general presidency, and Sister Lisa L. Harkness, first counselor in the Primary general presidency, were in Escuintla, Guatemala, Wednesday, August 29, 2018, to visit with families who have been living in a Church meetinghouse that has been serving as a temporary shelter since the natural disaster. The shelter is also a rehabilitation clinic for some survivors.

Sisters Aburto and Harkness greeted the volcano survivors, giving them words of strength and love. The families expressed their gratitude for the support and service they have received from the Church.

The sisters went to minister to the residents of the temporary homes that are in Finca la Industria, Escuintla. The housing was built with funds from the Church’s Humanitarian Aid Fund.

During the visit, the women auxiliary leaders also talked with doctors and patients at the Children’s Hospital of Infectious Diseases and Rehabilitation, where they presented a donation of medical equipment on behalf of the Church. The sisters expressed their gratitude to the doctors who are caring for the children.

Dr. Ana Karin Quinteros, director of the hospital, thanked the Church for its support, commenting that the equipment will help newborns with medical difficulties. Dr. Natalia Barrientos, chief of pediatrics and neonatology, said the equipment is important and necessary for the hospital. The donation includes phototherapy equipment, a stationary incubator and pulse oximeter devices to monitor oxygen levels.

Since June, Latter-day Saints have been collecting, preparing and distributing food and other supplies to displaced residents.

The sisters are traveling to four other countries in Central America — El Salvador, Honduras, Costa Rica and Panama — during their visit August 24–September 4, 2018, to train local Church leaders and speak at devotional meetings.