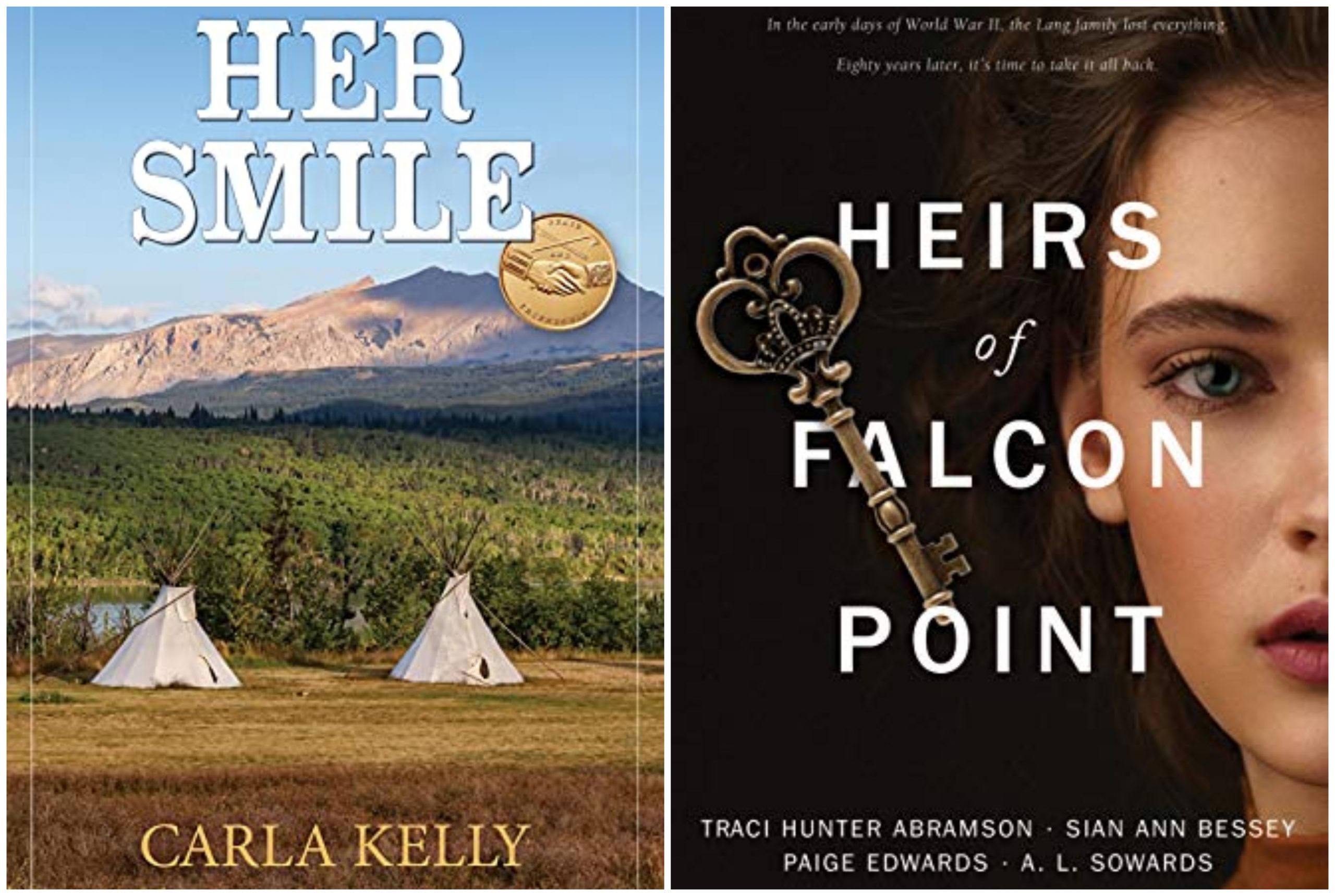 A couple of excellent novels deliver pictures of totally different bits of history, though both highlight fallout from times of war. Carla Kelly takes us back to 1877 with Her Smile and a desperate race by the Nez Perce Indians to beat the US Army to the Canadian border. Four more exceptional authors; Traci Hunter Abramson, Sian Ann Bessey, Paige Edwards, and A.L. Sowards, collaborate to produce Heirs of Falcon Point, a story that spans eighty years from World War II to modern time. Both historical novels will hold readers spellbound.

HER SMILE by Carla Kelly

Carla Kelly is an exceptional writer, who in her new novel, Her Smile, brings to life a chapter of the history of the American West most people know little about. She takes us back to 1877 when the Nez Perce Nation is forced from their homes in the cool valleys of eastern Oregon and North-Western Idaho by the US Army and a string of broken treaties. As the women, children, and native warriors are pursued by three armies across Wyoming and Montana on their race toward Canada, they face incredible hardships. One young white woman, by accident, travels with them.

Elizabeth Ann Everett and her family are experiencing a trip of a lifetime to the newly designated Yellowstone National Park. The trip has been more difficult than the prominent Nebraska family anticipated. Elizabeth Ann is shocked when she finds herself and her lumbering, old horse running alongside a mass of natives and a huge herd of horses fleeing ahead of the army. Her horse is frightened into joining the stampeding herd. The Indians are no happier than she is for her to be in their midst, but one warrior, Hawk, and his mother take her under their protection. Over the next six weeks she travels with them, she forms deep friendships with many of natives and comes to understand much of their culture. She also does a great deal of growing up and examining her life and goals. She witnesses and shares the terror of women and children under attack. She experiences extreme hunger. And she gains an understanding of a different culture and experiences disappointment in her own people’s unfairness, bigotry, and betrayal. She also learns much of love and sacrifice, both of individuals and of family.

Kelly uses an unusual format for this story. She writes in first person as though she were Elizabeth Ann recording the story for her posterity twenty years after it happened. Some of the events may be a little more graphic than some readers will be comfortable with, but I found even despicable acts to be written with finesse. Elizabeth Ann is likable from the beginning, but as she grows and matures, I found myself liking her more and more. Secondary and minor characters are also realistic. Having personally grown up in and/or visited some of the areas where this story takes place, I found the setting accurate and also found some familiarity with some of the events referenced. Anyone with an interest in the history of the American West will enjoy this deeper glimpse into the lives, customs, and injustices dealt to some of the natives of this vast land. There is plenty in the story for those who love action and even a heartbreakingly beautiful love story.

Carla Kelly is the author of forty-three novels and three non-fiction books. She has earned numerous awards including two RITA awards from Romance Writers of America two spur awards from Western Writers of America, three Whitney Awards, and a Lifetime Achievement Award from Romantic Times. She has held a variety of jobs including medical public relations work, feature writer and columnist of a North Dakota daily newspaper, a ranger in the National Park Service, and as a North Dakota Historical Society contract researcher. She now lives in Idaho.

With four authors one might assume Heirs of Falcon Point to be a collection of novellas, however that is not the case. The four authors, all top writers, collaborated to create one story. Their combined talent and experience have produced an exceptional story spanning eighty years of one family’s struggles to preserve their lives and property. It is also a carefully researched piece of history beginning with Hitler’s takeover of Austria to today’s European interaction.

The story begins with the wealthy widower, owner of an Austrian estate, making plans to flee the country rather than submit to the German Reich’s demands. With the help of his seventeen-year-old son he hides valuable family treasures and divides money and jewels among the packs he, his  son, and two young daughters will take with them. Before they can leave their home he is murdered by a Nazi sympathizer who was once a family friend. The son takes his sisters and flees with his father’s murderer in pursuit. Circumstances cause their separation, and they wind up in different countries, never seeing each other again or even knowing if the others are alive. In time they pass their story on to their children and grandchildren until events set in motion by the murderer’s descendant draws them back to Austria and the grand home that is rightfully theirs. Once more character is tested and lives are in danger.

Anna, Cole, Tess, and Lars know nothing of each other, other than they share a common ancestor and they grew up on the same stories, but they soon form an unshakable bond as the family and cousin relationships they never knew they shared pull then together. Pulled into the danger they face are a few individuals who risk their lives to help and who become much more than friends. Their common enemy, the grandson of the man who murdered their ancestor, grew up, too, on stories of the vast fortune hidden somewhere on the estate and is determined to maintain ownership of the estate he and his family have claimed and plundered for eighty years. He is determined no heirs will live to relieve him of his ill-gotten fortune and growing income.

As one might expect from this crew of writers the characters are portrayed in a strikingly realistic manner, their dialogue is believable, and it’s easy to feel they are real people whom we know and care about. The various writers’ familiarity and expertise concerning Europe, law enforcement, World War II, and modern international relations all play a part in providing a realistic setting and background for the story. It moves at a comfortable pace and gives the reader a satisfying ending. This novel will appeal to a large number of adults and older teens, both male and female, who enjoy well-written action stories, history, and even a touch of romance.

Tracy Hunter Abramson was born in Arizona, lived for a short time in Venezuela, and after graduating from BYU worked for the Central Intelligence Agency. Sian Ann Bessey was born in Cambridge, England, grew up in Wales, and currently lives in Idaho. Paige Edwards has British roots, including a title, and often returns to the UK. A.L. Sowards has lived in Washington, Utah, and Alaska. She has a strong background in history and is particularly fascinated by the 1940s. All four have impressive lists of published novels to their credit and numerous awards denoting their excellence.