Latter-day Saint Fiction: Stories of Then and Now | Meridian Magazine 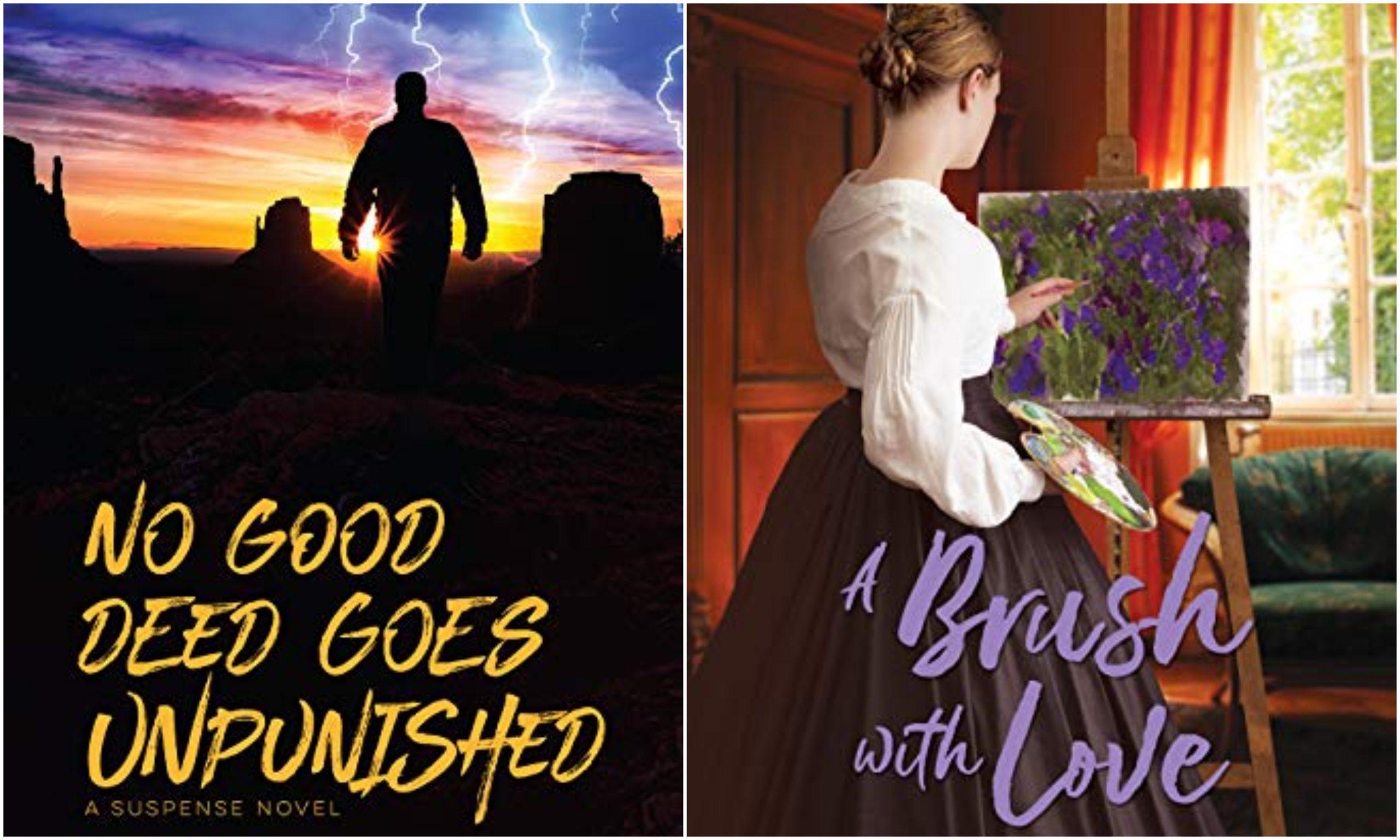 Latter-day Saint Fiction: Stories of Then and Now

The content, the covers, the time period and the focus of the books I chose to review today are nothing alike, though they are both well written and will appeal to a large cross-section of readers. No Good Deed Goes Unpunished by E. James Harrison is a contemporary Suspense novel while A Brush with Love by Renae Weight Mackley is an Historical Romance.

Anyone looking for a Suspense novel that will keep you up long after you should be in bed should check into No Good Deed Goes Unpunished by E. James Harrison. Harrison’s latest novel begins with a prologue detailing the torture and abandonment of a man left to die in a remote southwest desert area, then jumps forward five years to a former U. S. Air Force pararescue jumper, Garrett Shepherd, appearing in an attorney’s office for the reading of a will. He learns the man he rescued from certain death in the desert years earlier and left at a southern Utah hospital, Edwin Sprague, survived and only recently passed away, leaving Garrett five million dollars and a chance to double that amount if he locates the vehicle the man had been driving and some boxes hidden inside it. The attorney, his assistant, and the widow and her two adult children, as well as Garrett, recognize the challenge as an attempt to get revenge from beyond the grave. At first he is reluctant to accept the challenge, then agrees with the stipulation he will try for one week, then if he doesn’t succeed, it will be over.

The attorney’s assistant, a beautiful, intelligent attorney, joins him in the search for the vehicle he assumes was abandoned somewhere in the desert, though nowhere near where he found Sprague. He recruits the help of a few friends, but it doesn’t take long to realize someone else knows of his quest and will stop at nothing, including murder, to end his search. A Navajo policeman gets involved, too. Almost immediately they realize someone very powerful wants the search stopped and will do anything to cover up a trail of bribery, scandal, and murder.

The characters in this story are realistic, though not always likable. Garrett is tough and basically a loner. The story is told primarily from his point of view, but occasionally shifts to a secondary character’s perspective. The setting in southern Utah and northern Arizona, including the Native American reservations, the small towns, and long stretches of highways with their jumble of law enforcement and investigation rules are handled well. No Good Deed Goes Unpunished is Suspense with a great deal of Mystery. There’s also a tiny bit of Romance. The suspense builds well to an exciting denouement. The ending is realistic, but not exactly satisfying. The writing style is bold and exciting. Readers who enjoy fast paced action novels with plenty of suspense and mystery will want to pick this one up.

E. James Harrison was born in Salt Lake City, Utah. He and his wife have two daughters, a son-in-law, and four grandchildren. He has degrees in public relations and creative writing. No Good Deed Goes Unpunished is his sixth published novel.

A BRUSH WITH LOVE by Renae Weight Mackley

It’s 1902 in San Francisco when Alice Burnham and her grandfather clash over her future. She has a passion for art and wishes to continue attending the San Francisco Art Institute. She also wants to marry for love while her grandfather  wants her to marry for financial security. She has no interest in the parade of suitors he introduces her to. They finally reach an agreement. If she finds a suitable man of her own choice and marries before she reaches twenty she can continue with her art study. If she is still unwed at twenty, she will leave her art behind and marry a man of Grandfather’s choice. Soon after she begins art school she meets two gentlemen who impress her, but will either satisfy her grandfather’s idea of suitable? One is a classmate, the son of a well-known businessman, and the other is a widower and her art teacher. In the course of her new class experiences she meets a number of interesting people and is made aware of the plight of Chinese girls in their part of the city. She makes the mission home a cause she supports. She is also aware thefts from the art school are taking place and gets involved in finding the thief, bringing a new level of danger into her life.

A Brush With Love fits in nicely with a number of other books released this past year concerning the efforts of women to leave the Regency era rules behind, gain the vote, and achieve the rights and privileges of self-determination and equality. It also seconds the story of Donaldina Cameron and the Occidental Mission Home for Girls Heather B. Moore highlighted in The Paper Daughters of Chinatown. Alice is aptly portrayed as a bright, talented young woman caught in the middle of society’s transition of thinking concerning the role of women in society. The other characters are portrayed well also, even Grandfather who struggles between his views of the past and his love for his granddaughter.

The explanations of various art techniques are presented well and will be interesting to even those with little artistic interest. The story moves steadily toward a satisfying conclusion. The background and setting are strong and thoroughly researched.

Renae Weight Mackley has lived in California and Utah. She and her husband have six children and a number of grandchildren. She graduated from Brigham Young University with a BS degree. She has combined being an “at home” mother and substitute teaching. This is her fifth novel.