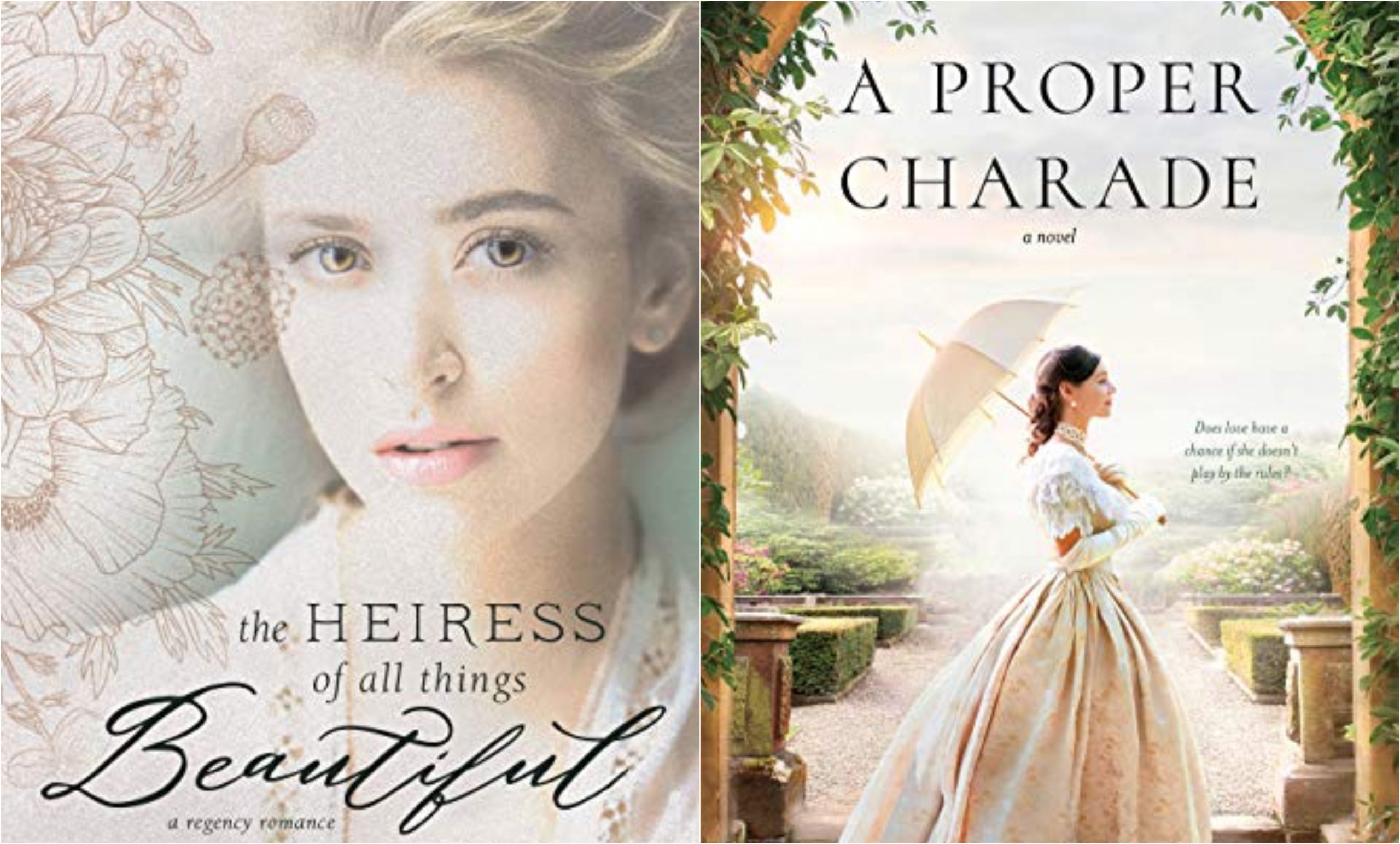 Though their covers make these two novels appear to be typical Regency Romances, the stories are far from typical. The Heiress of All Things Beautiful by Anita Stansfield reveals a darker side of the Regency era that continues in our day. Esther Hatch in A Proper Charade introduces a lovely young bombshell heroine who sets out to prove she’s as capable as her brother. A seemingly light, comic read, this tale reveals a great deal of truth about supposed class distinctions.

THE HEIRESS OF ALL THINGS BEAUTIFUL

Fans of Anita Stansfield will love her latest Regency Romance and those who don’t often read her books will be pleasantly surprised by this tender story. The Heiress of All Things Beautiful struck me at first as an odd title for a story dealing with a great deal of ugliness. As I thought about it, I concluded it hints about the beauty inherent in choosing the better part, even when surrounded by that which is cruel, ugly, and negative. Stansfield didn’t choose an easy topic, but it is one that has been a cruel reality through all ages and peoples. Some societies have condoned abuse of family members; others have simply looked away. Heroes endeavor to protect and prevent. They shelter and comfort the hapless victims.

Florence Prescott is the only daughter of Lord Prescott and has been cruelly beaten and abused by her wealthy, aristocratic father all of her life. She has a younger, severely handicapped brother who has been hidden from society since birth. Their mother loves them, but is unable to protect them and has long since given up trying. Since English Regency laws allowed men to punish wives and children anyway they liked, there was no recourse for them. Appalled by the cuts and bruises left by their father on her helpless brother’s face, Florence screams at her father, who then beats her so severely she is unconscious for several days and temporarily crippled.

Evan Avery worked on the Prescott estate as a stable hand until his father passed away and he returned to his distant home to care for his mother and the family farm. While working on the estate he had befriended both Florence and her brother. When he learns of the dire situation of his friends he makes plans to rescue them. Rescuing a badly injured woman and a young man who can barely walk won’t be easy. His plan succeeds and he takes them to his distant farm where they learn to grow and harvest crops. Eventually Evan proposes to Florence. Can a high ranking titled lady find happiness with a simple farmer? Will her father find them? Will they ever see their mother again? And what will be their horribly abused mother’s fate?

Stansfield does an excellent job of getting inside the heads of abuse victims to share their confused senses of being broken, unworthy, and guilty of some unknown fault. Her characters,  though depicted in the Regency period, share the same thoughts and feelings as similar victims in our day. Not only does she depict the characters well, but the background  and settings pertaining to medical, agricultural, and legal matters of that time period are presented realistically. The plot moves at a comfortable pace and though the ending may disappoint some readers, it is honest and leaves long term hope and comfort.

Anita Stansfield has published more than seventy books in slightly over a quarter of a century. She was born and raised in Provo, Utah. She and her husband have five children and a growing number of grandchildren.

THE HEIRESS OF ALL THINGS BEAUTIFUL by Anita Stansfield, Published by Covenant Communications, Inc., 198 pages, soft cover $15.99. Also available for eReaders and AudioCD.

Esther Hatch’s A Proper Charade is a different kind of Regency Romance. It’s funny! It has the usual lines between classes, the strict social rules, the attention to fashion, formal balls, and all of the other hoopla attached to that time period, but Hatch uses them to showcase a different kind of “lady.”

Lady Patience Kendrick was born to a life of privilege and leisure, but a run in with her brother where he accuses her of being unable to do anything or take responsibility changes that. He served two years under General Woodsworth’s command which he claims trained him to accept hardship, accomplish difficult things, and prepared him to assume the responsibilities left to him by the early death of his father, the Duke. Patience, who is anything but patient, decides she should do the same thing as her brother, serve under General Woodsworth’s command. She can’t join the military, so she does the next best thing–she applies for the position of maid in the General’s home.

Soon General Woodsworth’s son, Andrew, and Patience form an alliance to secure a bride for Andrew. In the process they fall in love which creates more problems. Andrew is well aware it wouldn’t be socially acceptable for the son of a great general to marry a maid. Patience is also acutely aware that it wouldn’t do for the daughter of a duke, a lady, to marry a plain mister.

Patience loves her dog and she loves laughter. Andrew is a mite too solemn and only learns to smile and enjoy himself when Patience enters his life. Both are likable characters. There’s a touch of realism in all of the characters that matches traits found in people of our time which adds to the enjoyment of this book. The setting for this tale follows the standard format for the Regency era. The pacing is handled well and the plot builds to a satisfying conclusion. This book will be enjoyed by both teens and women who enjoy Regencies and even by some who don’t usually read this genre.

Esther Hatch grew up in rural Utah and attended Brigham Young University. This is her fourth published novel.