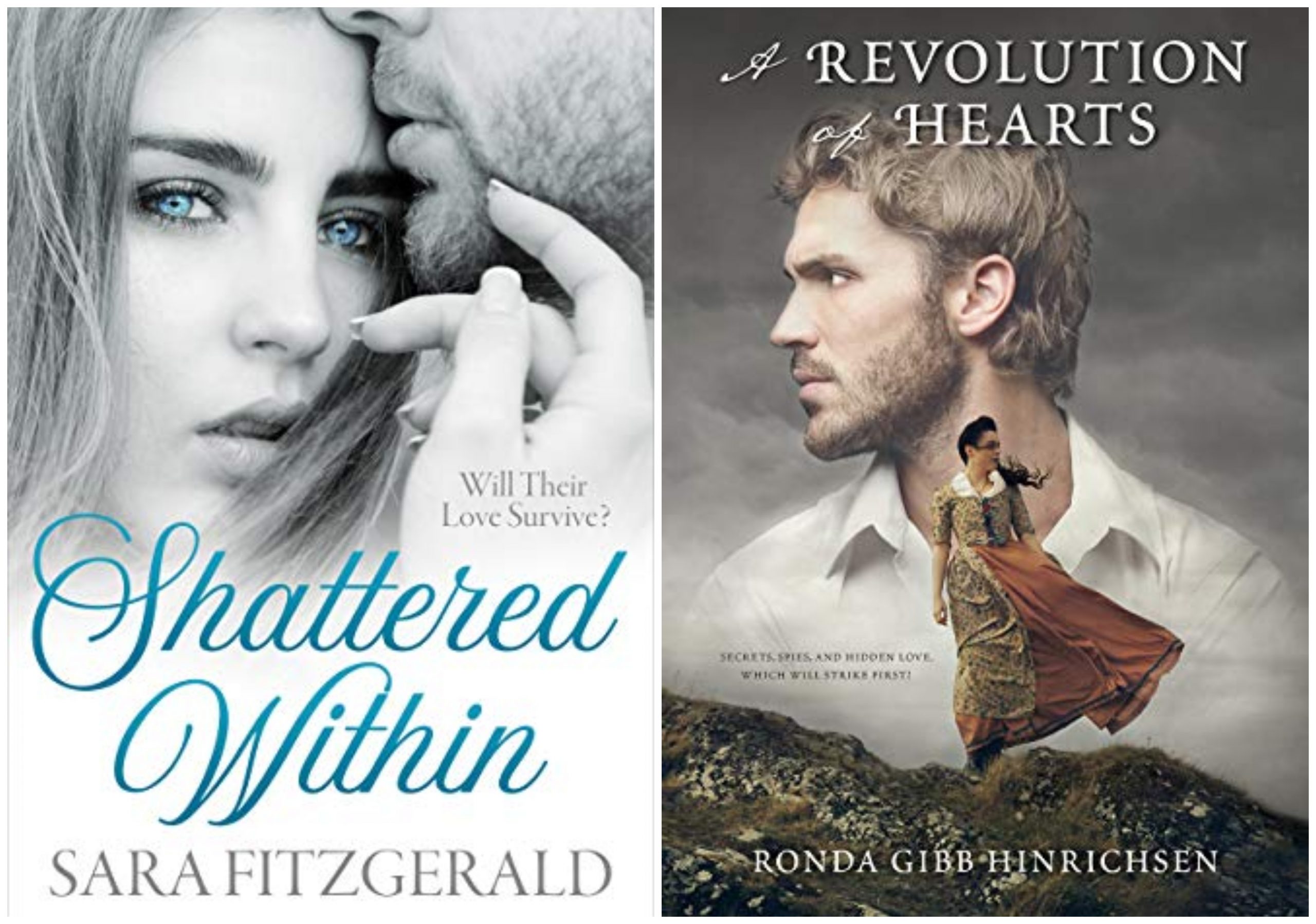 Two novels set in different time periods reveal two very different threats to life and love. Shattered Within by Sara Fitzgerald is a contemporary novel that takes a careful look at the risk of suicide and the effects of mental illness, not only on the one who is ill, but on those who love the one who is ill. It carries a strong message verifying that a person who is mentally ill doesn’t cease to be a person who loves, cares about family and God, and has hopes and dreams.

A Revolution of Hearts by Ronda Gibbs Hinrichsen goes back to the early years of the French Revolution. An aristocratic French woman is both a witness to murder and is the murderer’s intended next victim. A struggle to outwit a law officer intent on framing, then killing, her crosses the channel and leads to more than one person with secrets. It also leads to a sharp change in her perspective toward class distinctions. Both are absorbing stories and both carry thoughtful messages.

SHATTERED WITHIN by Sara Fitzgerald

Katherine Michaels has suffered from depression episodes all of her life. One such episode leads her to seriously consider suicide. Unable to reach her husband, she calls 911. Her mental state deteriorates as she is rushed to a hospital. So begins Shattered Within by Sara Fitzgerald.

Brant Michaels returns home after a phony meeting arranged by his boss’s daughter to get him alone. He feels guilty for staying to talk with her after he realized none of his other co-workers were present. Learning his wife is in the hospital he rushes to her side where the doctor informs him she needs to be committed to the psychiatric ward.

During the time she is in the hospital Brant learns she is pregnant which limits the medication she can be given, he struggles with concern for what others will think concerning his wife’s mental illness, his relationship with both his sister and Katherine’s sister is troubling. He is in the middle of negotiations for a major promotion, and the boss’s daughter whom he finds attractive and appealing, is relentless in her pursuit of him. He knows he should refuse her attention even if it costs him the promotion he is seeking, but he puts off doing so. At times his faith in God wavers. He loves his wife and prays for her return to good health.

Katherine feels lost and confused. She questions why God let her become mentally ill. She worries about her sister and her sister’s children who are facing their own crisis, dealing with an alcoholic husband and father. She suspects Brant is unfaithful and doesn’t fully trust her  doctor. She forms a strong friendship with one of her nurses and a young fellow patient. She is grateful for her bishop’s visits and support.

The question becomes can either sister save her marriage? Some readers may question a love story where the main character is suffering from mental illness. As I read this story I was reminded of something my psychology professor said back when I was in school. He reminded us that everyone is ill or injured physically at times during our lives. From colds, broken bones, the flu, scrapes, cuts, diarrhea, to stubbed toes and hangnails, we all experience physical illness. He said it is no different with mental illness. We all experience some and some mental illnesses are more severe than others. This story deals with mental illness in a solid, factual manner. It is neither downplayed nor dramatized. It is a fascinating story that will hold the reader’s attention from beginning to end. The characters are realistic and easy to care about. It is strongly oriented to the beliefs of the Church of Jesus Christ of Latter-day Saints. My only negative comment concerning the book is it really needs a good copy editor to clean up the typos and grammar errors. I often read advanced readers copies of books which haven’t been copy edited yet, but I’m not sure my copy of Shattered Within is an ARC. To be perfectly honest, I loved this book and recommend it for adults and older teens.

Sara Fitzgerald has a Masters Degree in Social Work. She was chosen by the League of Utah Writers as Writer of the Year in 2006. She is known for her emotionally sensitive stories, especially her Christmas books, Saving Savanna and A Miracle for Ann. She and her husband have one child. They make their home in Utah.

A REVOLUTION OF HEARTS by Ronda Gibb Hinrichsen

A Revolution of Hearts begins in Paris during the early days of the French Revolution. Mademoiselle Dacia Prideaux attends the theatre where she hopes to see the man she expects will soon be her betrothed.  She sees him, but soon learns he is betrothed to someone else. Soon after, more sorrow is added to her heartbreak when she discovers her politically active, beloved brother has been murdered. The murderer, a high ranking police officer, confronts her and reveals his plan to kill her and make it appear she murdered her brother. She manages to escape and flee to England where she accepts employment as a maid. The murderer follows her.  As he searches for clues to her whereabouts and she contrives to escape, she begins to care deeply for her employer and discovers he has a secret identity too.

One of the most interesting factors in Dacia’s character is her gradual discovery and acceptance that class doesn’t really matter. Little by little she sheds her grand upper class superiorority and recognizes that servants and others she once looked down on or ignored have the same needs, desires, emotions, and dreams as she does. All of the characters are interesting and believable. The setting is established well and gives a realistic picture of the turbulence leading into the French Revolution. The plot moves steadily forward and reaches a dramatic climax where the heroine has a strong role.

The romance portion of the story from the early betrayal and disappointment to a relationship based on proven trust, friendship, and shared values along with physical awareness is handled with finesse and realism.

Ronda Gibb Hinrichsen also writes as Kathleen Marks. She lives with her family on a small farm in Utah. Her writing has garnered her a number of awards.