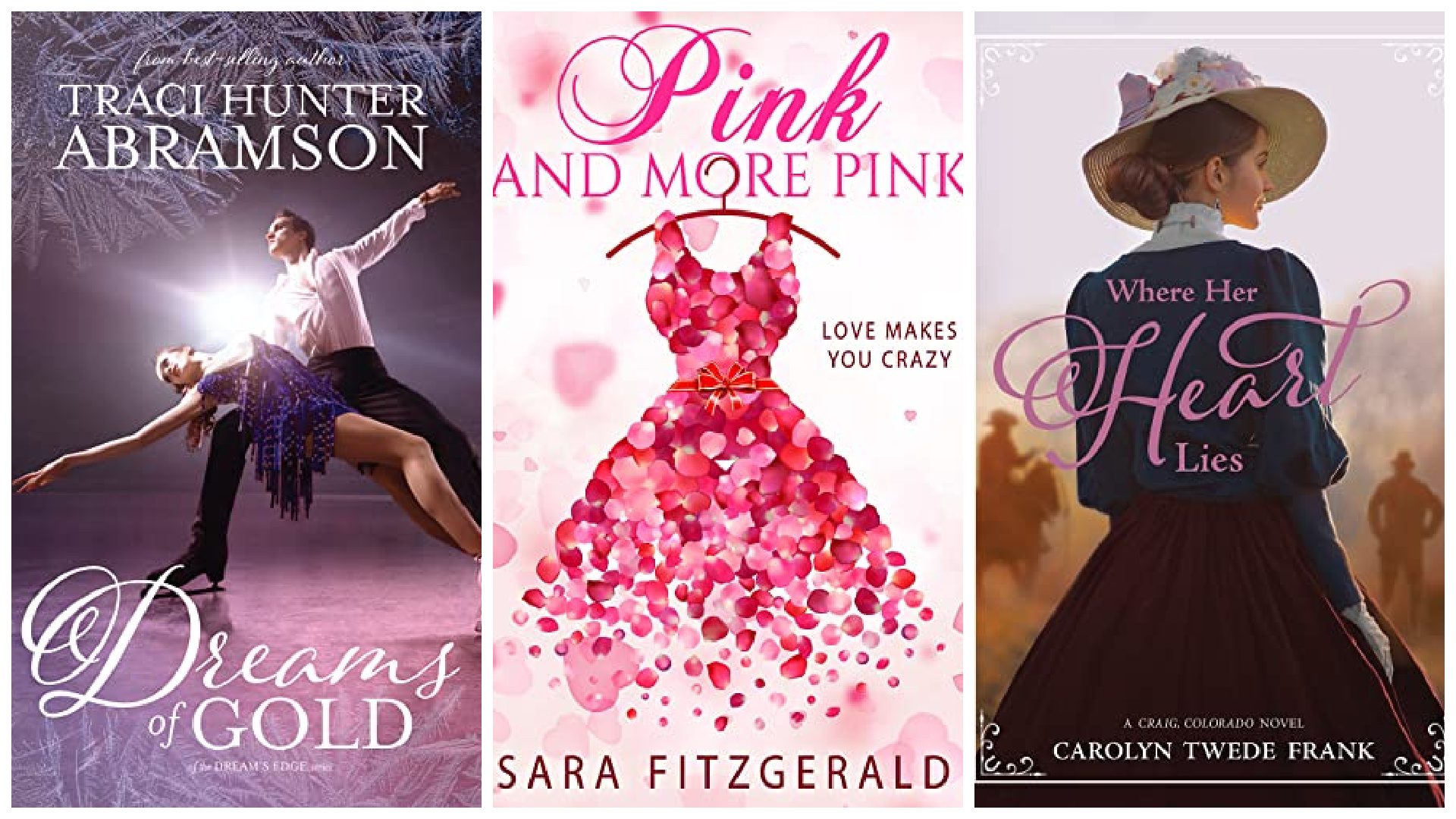 It’s that time! Time to think of love and romance. And time to cheer for our favorite Olympic champions. Traci Hunter Abramson brings us the final volume of her Dreams Edge series, Dreams of Gold just in time for the Olympics. It is not only a fun love story, but provides many details concerning preparing for Olympic competition. It also highlights the governmental restrictions the host country may impose on the participants.

Sara Fitzgerald provides us with a fun love story, Pink and More Pink to get us thinking Romance for Valentine’s Day. You won’t want to miss this fun contemporary love story. Going back in time to the early 1900s in Colorado, Carolyn Twede Frank brings us Where Her Heart Lies, a Western style romance filled with obstacles and difficult choices. All three are memorable novels that capture the essence of falling in love.

Dreams of Gold, Tracy Hunter Abramson’s final book in her Dream’s Edge series is being released just in time for the real Olympics. A satisfying read, this story follows Amaliya Marcell’s journey from ballerina to ice skating champion along with Tyler Linden’s dashed hopes for Gold to a new journey with a new partner.

Amaliya is the daughter of Katerina Petrova and Robert Marcell (Damcing to Freedom) a Russian ballet star and Canadian hockey player. Her dreams of becoming part of a renown ballet company are put on hold when her parents are severely injured in an automobile accident and she is sent to live with family friends while she finishes high school.

Robert works out at the local skating rink after his sister’s injury that ended their Olympic dream. He skates with another woman who doesn’t quite measure up to his level. He sees Amaliya skating and is entranced by her grace and skill. They meet and feel a strong connection which leads to their becoming partners. For two years they train together, face disappointments, danger, and triumphs. They share a dream and their hearts.

Abramson takes her characters through precise and detailed steps in their training. She is just as meticulous with the interactions between parents and children, friends, coaches, and negative characters. She presents a solid picture of the work, talent, training, and security steps that go into each step of the road to the Olympics. Her characters are realistic and likable. Readers will find themselves rooting for their success. They will also be touched by the pull of family torn apart by distance, death, or international politics. The low key romance is another plus.

Anyone who has spent time in Washington DC and the surrounding area will recognize the area where Abramson has placed the Marcell home as well as other identifying features of the area. Other locations in the story feel similarly realistic. The ending is happy, exciting, satisfying with just a tinge of “if only.”

Traci Hunter Abramson is a top-selling author with more than thirty novels to her credit. Those novels have earned her seven Whitney Awards along with recognition as Whitney Best Novel of the Year awards twice. She was born in Arizona, lived in Venezuela for a short time, graduated from Brigham Young University and worked for the Central Intelligence Agency. After beginning her family she became a high school swim coach.

Nick Stevens is transferred by the company he works for to Utah for a six month project. Although he’s a California guy through and through, he’s happy to get away from a messy breakup and some unpleasant experiences with a dog and some noisy children. He’s adamant he doesn’t want anything to do with kids or dogs, so when he discovers his next door neighbor in the condo he has rented is a young widow with an eight-year-old daughter and they have a crazy, ball of fluff dog, he’s tempted to look for another apartment.

Hailey Smith’s husband passed away three years ago, leaving her to raise their daughter, Ella, a child with a vivid imagination. She thinks she’s a mermaid and her dog is really a dolphin. Hailey sells beauty products to support herself and her daughter. Her enthusiastic sales approach includes a lot of parties and open houses.

Nick loves the ocean, sunshine, and surfing and finds little appeal to snow, cold, and skiing. He finds himself attracted to his next door neighbor, but he doesn’t want a package deal that includes a child and a dog. Yet there’s something about a little girl who thinks she’s a mermaid and her crazy dog that touches a place deep in his heart. The more time he spends with her, the more he begins to care for her—and the less annoying her troublesome dog becomes. He doesn’t doubt she would love the ocean, but would her mother? Could he give up surfing and sunny beaches for a frozen desert?

Hailey has worked hard to establish her beauty products business. She loves the Salt Lake Valley and the surrounding beautiful mountains. Having her parents nearby is a definite advantage.  How can she possibly fall for a man who will return to his world of sunny beaches in a few short months? How could she possibly give up her business and beloved customers to start all over in an unfamiliar place?

This story is fast and fun and the characters are highly likable. Both teens and adults will enjoy it. The setting is realistic. It also provides a positive glimpse of many real recreational areas along the Wasatch front for those who wish to enjoy surfing, waves, swimming, or visit a great aquarium. The action moves at a comfortably fast pace and the ending is satisfying. It’s a great story to set the Valentine mood.

Sara Fitzgerald lives in the Salt Lake Valley. She and her husband have one daughter and their own American Eskimo dog. Her writing has earned her multiple awards including the League of Utah Writers’ Writer of the Year for 2006 award.

WHERE HER HEART LIES by Carolyn Twede Frank

Carolyn Twede Frank’s fifth Western Romance, Where Her Heart Lies, features Celeste  McCurdy and Logan Jones and is set in the Colorado frontier town called Craig. Celeste has spent the past five years in the East attending a finishing school which she hated. She’s anxious to resume her friendship with Logan and resume the Western way of life she loved as a child. Just as her friendship with Logan appears to be headed to more than friendship, an old beau from the East shows up with promises and lots of money.

Logan has a deformed leg which causes him to limp. It’s also the reason his wealthy parents dismissed him as their heir. Instead, their ranch and money was left to his older brother, a mean scoundrel, hanged for murder. The fortune then reverted to his sister.  He works for low wages as a part time stable hand and a part time mail carrier. Though he cares for Celeste he can see no way he can marry and start a family. His dreams of finding a way to marry Celeste come crashing down when her old beau shows up.

Torn between the two men, Celeste has to decide between financial security or following her heart.

This story is set in 1910 in a small town in Colorado. It was a time when women were becoming more independent, yet many of the old ways were still clung to. Western justice, long distances between homes or ranch houses was common, large tracts of land were still wild and unexplored, the automobile was just being introduced, but most people still rode horses or drove buggies or wagons. The characters in this story are true to their time period. The raw deal Logan got in life will touch the reader’s heart. As will the misery Celeste endured being away from her family and at the mercy of her grandmother and a school system that did little to prepare her for life in the West. The story both begins and ends with strong events.

Carolyn Twede Frank has written two World War II novels and Where Her Heart Lies is her fifth Western Romance.. She and her husband make their home in the West near the Rocky Mountains.