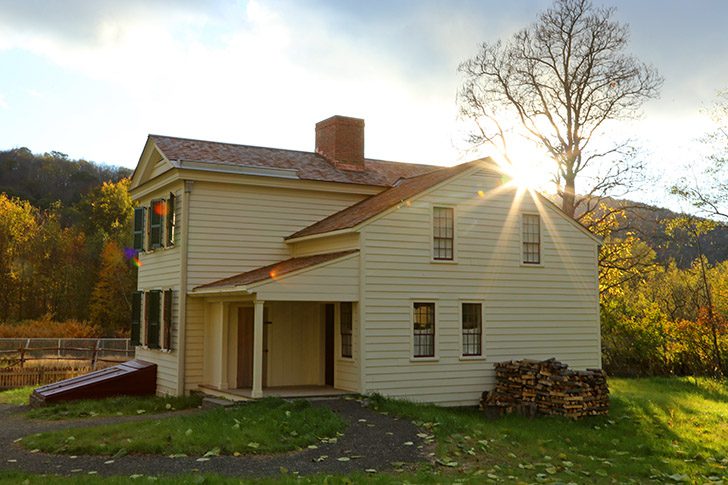 Joseph Smith Sr. and Lucy go to see Joseph Jr. and Emma in Harmony, Pennsylvania. Joseph relates details of what happened after the manuscript was stolen. Joseph goes through time of repentance and finally obtains forgiveness. Parts of D&C 3 and 10 are quoted. Joseph Sr. and Lucy meet Emma’s parents, Isaac and Elizabeth Hale.

We never heard from our unfortunate son until two months after, when, being uneasy as to the consequences of his distress of mind, Mr. Smith and myself went down to Harmony to make him a visit.[i] When we came within three-quarters of a mile of the house, Joseph started off to meet us, telling his wife that Father and Mother were coming, although he could not see us. He met us with a countenance blazing with delight, and it was very evident that his joy did not arise wholly from seeing us. When I entered, the first thing which attracted my attention was a red morocco trunk lying on Emma’s bureau, which Joseph shortly informed me contained the Urim and Thummim and the plates. He said very little concerning the subject of his earlier trouble until evening. He then related what had taken place since he was in New York with minute precision as follows:

“Immediately after I left you, I returned home. After I arrived here, I commenced humbling myself in mighty prayer before the Lord, and as I poured out my soul in supplication to him, that if possible I might obtain mercy at his hands and be forgiven of all that I had done which was contrary to his will, an angel stood before me and answered me, saying, that I had sinned in delivering the manuscript into the hands of a wicked man, and as I had ventured to become responsible for this man’s faithfulness, I would of necessity suffer the consequences of his indiscretion, and I must now give back the Urim and Thummim[ii] into his (the angel’s) hands.

“This I did as I was directed, and as I handed them to him he remarked, ‘If you are very humble and penitent, it may be you will receive them again; if so, it will be on the twenty-second of next September.'”[iii]

Joseph then related a revelation which he received soon after the angel visited him, a part of which is as follows:

Behold, you have been entrusted with these things, but how strict were your commandments; and remember also the promises which were made to you, if you did not transgress them.

And behold, how oft you have transgressed the commandments and the laws of God, and have gone on in the persuasions of men.

For, behold, you should not have feared man more than God. Although men set at naught the counsels of God, and despise his words-

Behold, thou art Joseph, and thou wast chosen to do the work of the Lord, but because of transgression, if thou art not aware thou wilt fall.

But remember, God is merciful; therefore, repent of that which thou hast done which is contrary to the commandment which I gave you, and thou art still chosen, and art again called to the work;

Except thou do this, thou shalt be delivered up and become as other men, and have no more gift.

Who has set at naught the counsels of God, and has broken the most sacred promises which were made before God, and has depended upon his own judgment, and boasted in his own wisdom.

For thou hast suffered the counsel of thy director to be trampled upon from the beginning.

And this testimony shall come to the knowledge of the Lamanites and the Lemuelites, and the Ishmaelites, who dwindled in unbelief because of the iniquity of their fathers, whom the Lord has suffered to destroy their brethren the Nephites, because of their iniquities and their abominations.

And for this very purpose are these plates preserved, which contain these records-that the promises of the Lord might be fulfilled, which he made to his people;

And that the Lamanites might come to the knowledge of their fathers, and that they might know the promises of the Lord, and that they may believe the gospel and rely upon the merits of Jesus Christ, and be glorified through faith in his name, and that through their repentance they might be saved. Amen.

I will now return to Joseph’s recital.

“After the angel left me,” said he, “I continued my supplications to God, without cessation, and on the twenty-second of September, I had the joy and satisfaction of again receiving the Urim and Thummim, with which I have again commenced translating, and Emma writes for me, but the angel said that the Lord would send me a scribe, and I trust that it will be so. The angel was rejoiced when he gave me back the Urim and Thummim, and he told me that the Lord was pleased with my faithfulness and humility, and loved me for my penitence and diligence in prayer, in the which I had performed my duty so well as to receive the Urim and Thummim and was able to enter upon the work of translation again.”

A major portion of The Book of Mormon was translated here in Joseph and Emma’s Harmony home.

A few months after Joseph received them, he inquired of the Lord, and obtained the following revelation:[v]

Now, behold, I say unto you, that because you delivered up those writings which you had power given unto you to translate by the means of the Urim and Thummim, into the hands of a wicked man, you have lost them.

And you also lost your gift at the same time, and your mind became darkened.[vi]

Nevertheless, it is now restored unto you again; therefore see that you are faithful and continue on unto the finishing of the remainder of the work of translation as you have begun.

Do not run faster or labor more than you have strength and means provided to enable you to translate; but be diligent unto the end.

And for this cause I said that he is a wicked man, for he has sought to take away the things wherewith you have been entrusted; and he has also sought to destroy your gift.

And because you have delivered the writings into his hands, behold, wicked men have taken them from you.

Therefore, you have delivered them up, yea, that which was sacred, unto wickedness.

And, behold, Satan hath put it into their hearts to alter the words which you have caused to be written, or which you have translated, which have gone out of your hands.

And behold, I say unto you, that because they have altered the words, they read contrary from that which you translated and caused to be written;

And, on this wise, the devil has sought to lay a cunning plan, that he may destroy this work;

For he hath put into their hearts to do this, that by lying they may say they have caught you in the words which you have pretended to translate.

While on this visit, we became acquainted with Emma’s father, whose name was Isaac Hale; also his family, which consisted of his wife, Elizabeth; his sons, Jesse, David, Alva, Isaac Ward, and Reuben; and his daughters, Phebe and Elizabeth.[vii]

This is the home where Emma Hale was born and where her family lived at the time of the translation of the Book of Mormon.

They were a lovely, intelligent, and highly respectable family. They were pleasantly situated, living in fine circumstances in the town of Harmony, on the Susquehannah River, lying a short distance from the foot of a splendid range of mountains. They lived in a large, neatly finished frame home, with every convenient appendage necessary on an extensive and well-cultivated farm.[viii] It was a most delightful situation and did honor to the good taste of the intelligent proprietor.

We spent our time very agreeably and returned home relieved of a burden which had seemed too heavy to be borne. The joy we had over the present prosperity of our son with regard to his spiritual concerns far outweighed anything of the kind which we had before experienced. We now had learned to appreciate the sweet from having drunk deeply of the bitter for a season.

[ii] In the Preliminary Manuscript, Lucy states that Joseph must give back the plates, not the Urim and Thummim.

[iv] In the 1853 and later editions of Lucy Mack Smith’s history, the verses from D&C 3 end at this point. In the Preliminary Manuscript, Lucy quotes D&C 3 to its conclusion.

[v] Based on Lucy’s account, this revelation was not given any earlier than September 22, 1828.

[vi] Note here the Lord distinguishes between the “gift” Joseph had been given and the Urim and Thummim.