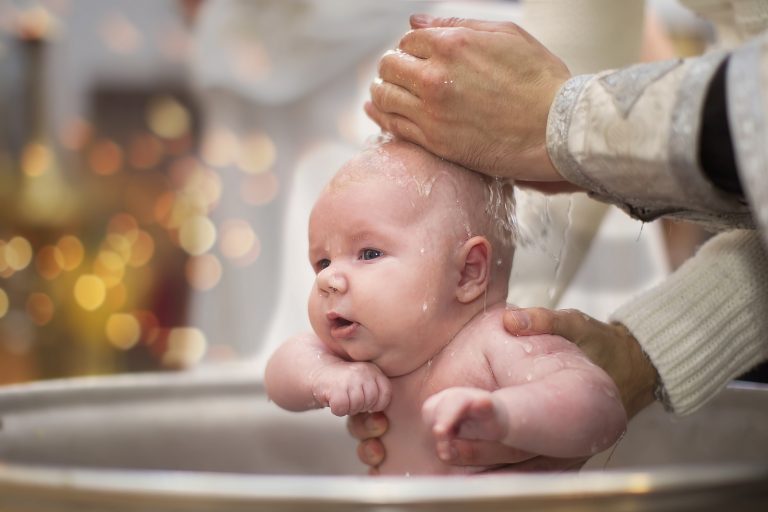 Infant Baptism and the Plague

“In the day of their peace,” said the Lord, referring to the Latter-day Saints in 1830s Missouri, “they esteemed lightly my counsel; but, in the day of their trouble, of necessity they feel after me” (D&C 101:8).

We aren’t well-located to look down upon those early Saints, though, because we’re all in the same mortal boat.
Our lives go along smoothly, until they don’t.  When we’re comfortable, we often become complacent.  And then, when difficulties or challenges jolt us awake and disturb our routine, we search, sometimes desperately, for help and for answers.  If no other solution offers itself, even the most resistant of us often turn to God.  And death, whether our own or that of a loved one, is among the very greatest disturbances of . . . well, mortality.  It provokes the most urgent of questions; it can drive us to our knees, even after nothing else has.

Commencing in the mid-fourteenth century, for instance, the so-called “Black Death”—a form of the bubonic plague—ravaged both north Africa and Eurasia.  Estimates have put its European death toll at between a quarter and two-thirds of the continent’s inhabitants.  Some scholars believe that the entire global population fell from roughly 450 million to 375 or even 350 million; others put the number of deaths worldwide as high as 200 million.

There was no cure then and, although the plague faded, it didn’t altogether disappear.  Over the next several generations, it was a recurrent and terrifying visitor to Europe.  For example, during eighteen horrific months in 1665 and 1666 approximately a quarter of the population of the English capital died in the Great Plague of London.

Thus, it’s scarcely surprising that, when the plague appeared in the southern German duchy of Bavaria in 1632, widespread concern and even panic ensued. In 1634, the disease killed approximately 15,000 residents in Bavaria’s capital, Munich—perhaps a majority of the city’s population at the time.)

When a returning resident of the Bavarian village of Oberammergau unwittingly brought the disease into his hometown that same year and soon died from it, and then other villagers became infected and died, the little town was desperate. Nearly every family in the village had lost at least one victim, and some families had effectively been wiped out. Now facing the plague on top of the already massive casualties of the devastating Thirty Years’ War (1618-1648), Oberammergau’s very survival was at risk.

Thus arose its famous Passion play.  The villagers of Oberammergau collectively vowed to God that, if he would spare them from the plague, they would faithfully stage a play every ten years thereafter, commemorating and recounting the last days of Jesus. Their vow, the chronicles report, was heard. Miraculously, the epidemic failed to claim a single additional victim, and all who had been suffering from the plague recovered.  And the Oberammergau Passion Play is performed still today.

Similar plagues also ravaged the ancient world, including a mid-sixth century pestilence that almost destroyed the Byzantine Empire during the reign of Justinian the Great.  Perhaps the earliest of them occurred in the second century.

Sometime during AD 165, under the remarkable soldier-emperor and philosopher Marcus Aurelius, the Roman Empire was struck by the so-called “Antonine Plague”—named after the seven-emperor dynasty of which Marcus Aurelius was the sixth.  Originating near today’s Baghdad and brought back by returning soldiers, it is thought to represent the first appearance of smallpox in the Mediterranean Basin and Europe.

At its height, the Antonine Plague killed approximately 5000 people daily in the city of Rome alone.  It probably claimed more than twenty percent of the total population of the Roman Empire; in certain especially hard-hit areas of Roman provincial Egypt, the death toll may have surpassed ninety percent.  Horrified, the emperor set about in AD 166 to restore temples and shrines, mobilize the pagan priesthoods, and encourage prayers for an end to the scourge.

Meanwhile, an already sizable and growing Christian population lived under his rule.  How did Christians react?  Italian scholar Franceso Arduini suggests that their superior organization and their famous charitable care for the sick probably allowed them to withstand the epidemic more successfully than their pagan fellow-countrymen.  (Quite separately, in his important 1997 book “The Rise of Christianity: How the Obscure, Marginal Jesus Movement Became the Dominant Religious Force in the Western World in a Few Centuries,” the eminent sociologist Rodney Stark has argued that Christian behavior during pandemics contributed significantly to the rapid spread of the faith, not only because of differential survival rates but because Christians inspired the admiration of those around them.)

Still, Arduini says, the Christian movement was no longer made up only of adult converts by AD 165; multi-generational Christian families were having children.  And those children too, not merely pagan children, suffered from the high infant and child mortality of smallpox.

This is significant.  Arduini, author of a 2010 book entitled “Il battesimo dei bambini,” points out that “there is no explicit reference to the baptism of children” during the period between the original Christian apostles and the advent of the pandemic of AD 165.  “Every time the topic is tackled,” he says, “children are considered pure regardless. This was orthodoxy up to the time of the Christian theologian Justin (in 150 C.E.), who was the last apologist to write about baptism before the Antonine Plague struck the Roman Empire.”

Arduini says that the first reference to child baptism comes in the book “Against Heresies” (2.22.4) by St. Irenaeus, the bishop of Lugdunum (Lyons, in modern France) and dates to around AD 180.  I confess that I can see no such reference there.  Twenty years later, though, around AD 200, infant baptism seems to have been an issue; in his “On Baptism” (18), the North African Christian writer Tertullian, whose dissent from some elements of the emerging Christian mainstream has kept him from sainthood, expressly opposes the practice on the grounds that children are both innocent and unable to understand the significance of the ordinance.  Arduini sees complete acceptance of infant baptism, though, at about AD 215 in the “Apostolic Tradition” of Hippolytus.

What drove the change?  Arduini thinks that the driver was the Antonine Plague, “the first devastating demographic catastrophe that struck the church.”

Lacking revelation and prophetic leadership amid a lethal, worldwide pandemic—and desperately afraid—second- and third-century Christians adopted the previously unattested practice of infant baptism, hoping to assure the salvation of their imperiled children.  And given high infant mortality rates in the pre-modern world generally, I would add, it’s scarcely surprising that the practice continued even after the waning of the Antonine Plague itself.
Arduini acknowledges a challenge to his argument, though:  Christian sources of the period don’t explain the adoption of infant baptism by reference to the disease.  Indeed, they’re silent about the epidemic altogether.  One reason might be, simply, that the terrors and pressures of the plague interfered with Christian (and other) writing for several years.  Immediate action pressed urgently, not theological speculation.

But Christian writers remained silent about the pandemic even after AD 180.  Perhaps, Arduini suggests, it’s because they didn’t know what to say.  From Marcus Aurelius on down, pagan thinkers evidently regarded the plague as a divine punishment.  Indeed, some apparently blamed the Christians.  So what were Christians to make of the fact that they, too, had suffered under the epidemic?  They probably didn’t know.  The “problem of evil” remains one of the greatest theological challenges, even for believers.

However, unlike Christians at the beginning of the third century after Christ, Latter-day Saints have clear prophetic guidance on the question of infant baptism:  The Book of Mormon denounces it.  The practice had appeared among the Nephites in the New World by no later than the late fourth century AD, shortly before the cataclysmic destruction of Nephite civilization.  Perhaps it emerged out of the widespread lethal violence that preceded that terrible event.

“He that supposeth that little children need baptism,” he exclaims, “is in the gall of bitterness and in the bonds of iniquity; for he hath neither faith, hope, nor charity; wherefore, should he be cut off while in the thought, he must go down to hell.  For awful is the wickedness to suppose that God saveth one child because of baptism, and the other must perish because he hath no baptism. . . .[H]e that saith that little children need baptism denieth the mercies of Christ, and setteth at naught the atonement of him and the power of his redemption. . . .  Wo unto such, for they are in danger of death, hell, and an endless torment.”  (Moroni 8:11-15, 20-21)

Moreover, modern revelation has reaffirmed that “little children are redeemed from the foundation of the world through mine Only Begotten” and has stipulated eight years old as the age of accountability (D&C 29:46-47; 68:25-27).

Although we don’t know the motives of the Nephites who evidently advocated infant baptism, perhaps we can sympathize with the Old World Christians who, facing a deadly global pandemic and fearing for their children, had already adopted the practice.  Perhaps we can forgive their error.

It has been argued, after all, that one factor in calling down the Nauvoo-era revelations authorizing vicarious baptism for the dead, and in the joyous and grateful enthusiasm with which the Latter-day Saints received them, was the Saints’ concern for those who had died during the Missouri persecutions and from the Mississippi River swamp fever or malaria that so afflicted them after they had fled to Illinois.  And it was almost certainly his concern about the fate of many people who had recently died that led President Joseph F. Smith to ponder 1 Peter 3-4—which led to the great vision of the redemption of the dead that we now know as Doctrine and Covenants 138.

The great worldwide influenza epidemic that began in March 1918 eventually killed at least seventeen million people worldwide, and perhaps as many as a hundred million.  And it came atop the First World War, which, when it officially ended on 11 November 1918, had claimed the lives of approximately twenty-two million soldiers and civilians.  (Millions more perished in its immediate aftermath: probably between a million and 1.5 million in the Armenian genocide alone.)  And President Smith had his own personal griefs during the months immediately preceding his October 1918 vision:  In January, his apostle-son Hyrum died suddenly at the age of 45.  The next month, February, his son-in-law Alonzo Kesler was killed in a tragic accident.  In September, Hyrum’s widow, Ida, died of complications from childbirth.  And his own health was failing; he himself would die in November.

Happily, though, these fearful challenges resulted in powerful revelation.  In seasons of pandemic, the restored Church has had prophets. The Christians of the late second and early third centuries, sadly, were not so blessed.

[This article was inspired by and relies heavily upon Franceso Arduini’s “The Pandemic Origins of Child Baptism,” which appeared in “Biblical Archaeology Review” 47/1 (Spring 2021):  https://www.baslibrary.org/biblical-archaeology-review/47/1/24.  For information on baptism for the dead at Nauvoo, see M. Guy Bishop, “”What Has Become of Our Fathers?” Baptism for the Dead at Nauvoo,”  “Dialogue: A Journal of Mormon Thought” 23/2 (Summer 1990): 85-97.]

Wonderful article. The book by Arduini must be very interesting. I wonder if it's been translated into English. Thanks so much for sharing your knowledge with us.

I also add my thanks for this article.