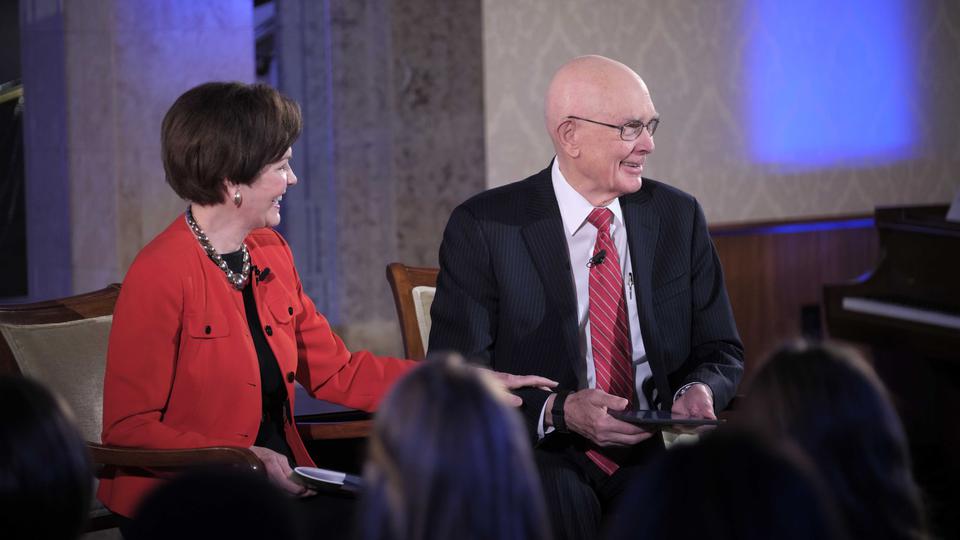 “We know that you can do this,” said Sister Kristen M. Oaks of the new Children and Youth Program at a Face-to-Face event Sunday night. “You can do it individually, you can do it with your family, and you can do it with your friends at Church.” She and President Dallin H. Oaks were hosts of the event that served to both encourage and touch base with the youth on how the program, which began to be integrated into wards across the world in January of 2020, is going.

“This program is designed to help you become more like our Savior in four areas: spiritual, social, physical, and intellectual,” President Oaks reminded the youth personally in attendance, as well as those watching by various means around the world.

But it’s not only the youth that can benefit from approaching personal improvement this way, and the power of the program does not lie in the neatly charted categories alone.

“I’ve learned that the Lord…is guiding my path and knows who I am and who I can become and the more I trust him, the more I’ll be able to be successful in whatever I set my mind to because I know that he is part of my plan,” was the comment of one young woman about what she had gained from the program so far.

“I’ve learned that as you keep Christ involved in your goals, it’ll be easier to get through tough trials in your life,” said another young man, “it’s very important to keep Him involved.”

Involving the Lord in the way we make and keep goals is something we should all be striving for, not just the youth, but too often we try to do things on our own without even realizing we are. Three inspiring youth examples given at the Face-to-Face event can illustrate the way that involving the Lord in our efforts can change the nature of our goals and elevate our path to achieve them.

I’ve drawn out examples that correspond to each of the approaches that Sister Oaks describes: individually, as a family, and as a quorum or class.

It may seem a simple example, but when one young man named Eli had set the physical goal to “Run every week” and quickly found he wasn’t getting anywhere with it, he sought personal revelation for how he could make a more effective goal for himself.

“I think it’s the first time I’ve seen him pray with intent and with a question and then come out and say, ‘ok, I have an idea of what I’m going to do’”, his mother said in a video about his experience that was shared at the Face-to-Face event.

What he decided to do was begin working out at the local high school, though he was still just an eighth-grader. His fellow athletes were much more advanced than him, but he felt strongly that this was what the Lord wanted him to be doing so he continued to do it.

His mother commented that if it had been her idea, she’d have let him quit by now, but because her son felt inspired by the Lord and is doing it on his own initiative, he persists.

That is the power of involving both personal revelation and personal motivation in the way that we set our goals. We can be led to the goal we might not have thought of ourselves and have the strength to persist in it.

Also featured in one of the video presentations during the Face-to-Face was the story of a young woman named McKenna whose mother was adopted as a baby from India and knew very little about her biological family.

When some health problems began to arise for her mother, McKenna decided to try to help track down her medical family history and get any information she could on her mother’s background in India.

But McKenna faced a fairly immediate roadblock as many of the records came up in Hindi, a language that no one in her home could speak. Being a teenager, she felt inadequate to do anything about this challenge and for a time, the project fell to the wayside. But a family history lesson in Church brought the Spirit into her heart and mind again and she felt it was something that Heavenly Father wanted her to do.

So, she got a Hindi copy of the Book of Mormon and an English copy and a printed chart of the alphabet. She couldn’t speak the language or read it, but she was able to compare the two books and begin to decipher enough to better understand the records she needed to.

Because of her efforts, she was able to find 200 members of her Indian family including her grandmother and bring their work to the temple.

“When you’re doing something that’s good and it’s a common goal, and you add Heavenly Father into it, it unites more than anything else could,” said McKenna.

“If you have Heavenly Father’s help,” she added, “anything is possible.”

How much less daunting would your goals seem if you knew for certain that you could reach them? If your goal-making is guided by the Lord, you can know that He will help pave the way for you, even through roadblocks that initially seem impassable.

As a Youth Group

The Face-to-Face event highlighted the ministering efforts of a particular group of youth in Africa (though it was not specified in which nation). With efforts led from within their own quorums and classes, they showed great concern and awareness of any members that may not be attending. Often we take note of someone missing in our own wards, but having the name on our lips and on our lists is as far as it goes.

But that wasn’t enough for these youth.

“We have one guy called Destiny whose house is very far from the chapel,” explained their bishop in a video presentation. The youth decided to call Destiny and not only let him know how important it was that he come to church, but that the other young men would be coming to his house on Sunday morning before 6am to bring him there. Obviously, picking him up so early meant that they would be picking him up on foot and all walking together, because that was the only way available.

“Through prayer, we found solutions that would help him come to Church regularly and also be able to bless and pass the sacrament”, said his teacher’s quorum president.

The young women of the branch similarly reached out to a sister in their midst—Millicent—that hadn’t come to Church in quite a while. They decided to go as a group to visit her after Church every Sunday just to see how she was doing. Millicent’s aunt was so impressed with the love and attention they were showing her niece that she began to allow her to come to Church again.

“I feel so blessed and so happy that I have people who think of me and people who love me,” Millicent said.

The Lord’s kingdom is structured so that everyone should know that they have people who think of them and people who love them, but often we don’t reach out as often as we think to, or as directly as we should.

To make and keep goals as fellow saints going about the Lord’s work is when we need His help the most. Those are goals we can’t afford to try to make and keep without Him.

Utilizing the power and pattern of the youth program as members of the Church, regardless of age, isn’t just a matter of breaking your goals into the four categories nor is it about using the discover-plan-act-reflect system for goal making and keeping. The power of the program is in the admonition to invite the Lord to be a part of your process for progress.

As one mother put it at the Face-to-Face, “Well, the Church isn’t holding our hands anymore. The Church is trying to help us help our children hold hands with the Savior and walk with Him.”

“As you learn more about personal revelation and as you learn that the Lord doesn’t shout, he only whispers, you will increase in your confidence that you can be guided personally by the Lord,” said President Oaks as the meeting drew to a conclusion.

“The Lord wants you to succeed and He will help you…we urge you to involve the Lord in your plans, in your goal-setting and seek His help as you go forward with your efforts.”