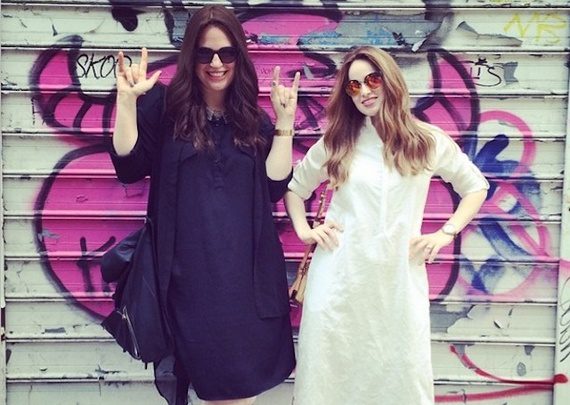 How the Internet Made Modest Fashion Cool

The following was originally printed in The Atlantic. To read the full article, click here.

Historically, modest clothing has often been at odds with what’s considered “cool,” especially in the classic American sense. This week, the Supreme Court heard oral arguments in the case of a young Muslim woman who was denied a job at an Abercrombie and Fitch store because her headscarf didn’t fit in with the company’s desired “look.” As my colleague Emma Green noted, “‘classic’ Americans probably dress like Protestants—which is to say, they don’t dress in much religious garb at all.”

And yet as Abercrombie’s profits continue to tumble, modest fashion’s profile is rising, thanks in part to an increasingly outspoken number of trend-conscious religious Millennials who stand by the idea that covering up can be glamorous, sexy, and, yes, cool. Corresponding with the rise of Instagram and fashion blogs, these Christians, Jews, Muslims, and Hindus—mostly young women based in the U.S.—took to the Internet to vent their frustrations about limited fashion choices and to share creative tips for elevating their wardrobes. The result: growth and visibility for the modest-fashion movement and a new generation of religious-lifestyle bloggers, designers, and trendsetters from across the faith spectrum.

It’s a surprisingly enticing focus group for the fashion business. Millennials are much less likely to be “religious” than their parents, with 25 percent of the generation identifying as unaffiliated with a faith—nearly double the rate for Baby Boomers. But as the Pew Research Center’s study on “Religion Among Millennials” points out:

Millennials remain fairly traditional in their religious beliefs and practices … Though young adults pray less often than their elders do today, the number of young adults who say they pray every day rivals the portion of young people who said the same in prior decades. And though belief in God is lower among young adults than among older adults, Millennials say they believe in God with absolute certainty at rates similar to those seen among Gen Xers a decade ago.