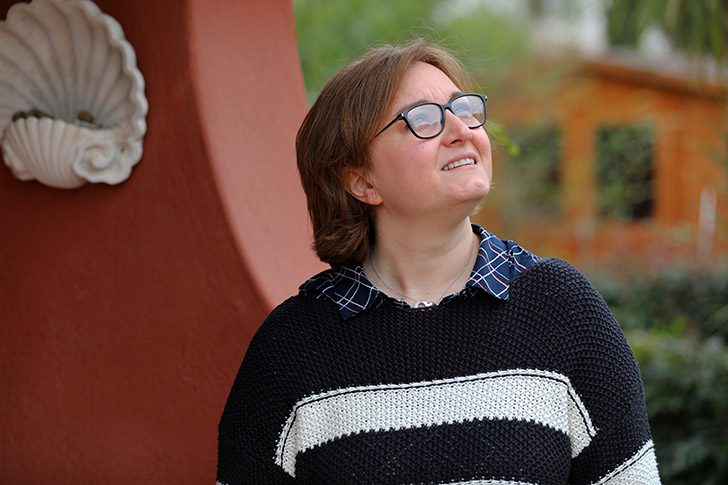 How One Italian Sister Found Solace after her Husband’s Murder

We sit on the patio of an Italian villa in Rome, not far from the temple. A slight chill is in the air, but we are warmed by the woman in front of us, who we met just minutes ago and already seems like a friend.

This warmth and grace seems almost beyond comprehension, because it was just four months ago that something devastating happened to her.

November 9 seemed like it would be just like any other day to Sara Tonon in her home in Torino, Italy. She had no foreboding feeling, as her husband, Marco Massano, left at 9:00 in the morning for work. He was a surveyor, certainly not a dangerous job, and this day he was driving to another town called Asti to do some work for the court.

He had been asked to survey a home that the court was repossessing because so many payments had been missed. The homeowner, a 91-year old, knew Marco was coming.

What Marco did not know is that Dario Cellino was waiting for him, sitting in a worn armchair, looking out his bedroom window, with a gun in his hand. Cellino, was well known in Asti because he had been the owner of a furniture factory until he lost it 7 years earlier during a period of crisis. Since then, most everything had fallen apart, including the home he lived in which appeared to be in a state of abandonment.

Marco just knocked on the door, surveying tools in hand, and the old man aimed, shot, and two bullets hit him in the chest.  He fell instantly. It was some time near 11 am. The 44-year old Marco, Sara’s husband, who just two hours before set off on a normal day, died at the hospital almost immediately.

When people heard the shots, they came running, but Cellino continued to aim and fire. The bullets continued when the ambulance arrived, so they could not immediately get to Marcos, who was left lying on the front porch. Two more, who tried to help, were wounded. Cellino barricaded himself inside his house until the police arrived and were able to force him to surrender.

Back at home, Sara was having a normal day. No one called to tell her what had happened. “I wonder why I didn’t have any feelings,” she said.

A close family friend called from Asti at 1:30. Sara had been born into the Church, but Marco was a convert, and this friend had taught him and baptized him.

“Have you heard from Marco?” he asked.

“I heard that someone shot a surveyor right where Marco had to go.”

Panicked, she tried to call the hospital with no response. Then she checked the news on her cell phone, She found the story. A 91-year-old man had just shot and killed a surveyor, but the victim was not named. “I was already shaking,” she said.

“My whole world collapsed,” she said. How could this be? “Marco was a friend to all. As a father, he was a kid to the kids. He was a bishop to the widows. He was loved by all. He didn’t have any issues. He was a good, good man,” Sara said.

Her first concern was how to tell her children, three sons ages 7, 5 and 21 months. They were playing innocently in the other room, not knowing that everything was suddenly so very different for them, that they were fatherless. Sara called a therapist she had known for many years who advised her “Just tell them the truth. You have to say, Dad is dead. You have to tell them the word.”

She did as her friend counseled. “They didn’t say a word,” she said. “They just looked at me.”

She asked them, “Did you understand what happened? And they said yes. I still have that look of their eyes in my mind.”

She went to Marco’s parents to tell them they had lost their only son. “It seemed unreal,” said Sara. That night she took the family to her mother’s to sleep.

“I couldn’t sleep, of course,” she said. “I just kept pacing back and forth from the kitchen to the living room. I was praying trying to understand what happened.”

Finally, the early hours of the morning, she knelt to pray, pouring out her heart to God. “I didn’t ask why? It was not my question. I still don’t know why this happened, and I am not asking actually,” she said. What she needed was strength. Then these words came to her mind, clearly from the Spirit. “With Marco’s death, you didn’t lose anything, because when you met and married him in 2008, you gained the chance to have eternal life together. You have posterity and you won’t lose them. You won’t lose the kids. You won’t lose each other.

“That thought gave me the strength I needed to stand the news and the future. I didn’t lose anything by losing Marco for this time, for we have eternal life together.

“My brothers gave me a blessing the next morning, and I was told that one day you will be grateful, not for what happened, but knowing why it happened. I considered this as a gift from God. If I were mad at that man who killed Marco, if I were anguished or vengeful, it would be so hard, but I am not at all.

“I did not choose to be this way, so calm. I think it is a gift so that I can educate my kids with peace in my heart. I couldn’t help them grow if I had that anger,” said Sara.

She took her children to a therapist to help them deal with their loss, but very quickly, the therapist said, “They don’t need me any more.”

“I have prayed, of course, and asked for the power of heaven to raise my kids, to keep them in the right path with the essential priorities in life. I want them to have the power to recognize the essential things in life that will take us to heaven. I don’t want us to be distracted by the worldly stuff.”

“I will be coming to the temple often,” she said. “We came here together for the open house with the kids. They know I am here this weekend.”

The family talks about Marco all the time.  Five-year-old Luca asked, “Will I recognize Dad when I see him again?” Simone who is seven asked, “Is Dad already a king?” Sara answered, “Not yet. He has to wait for me to be a queen.

“I’m trying to teach them a bigger, broader vision of what it means to live here and why we are here. The temple is the perfect place to learn how to do this and how to receive instructions and prepare for when we will hopefully be with Heavenly Father. I want them to go there.”

Sara, the new widow with a little family, said, “I have never been alone since this happened.”

Is it because she has been so supported and loved by family and friends? She acknowledged that she had, but then added, “It is more intimate and personal than that. A friend said that it is because I have allowed Heavenly Father to come and take me in His arms. That night when I knelt was the moment I recognized that I couldn’t do it by myself.  If I had been alone, I would have felt desperate, anguished or angry, but those feelings never, never came to my heart. Sometimes I feel guilty because I feel so much peace.

“Of course, when I am by myself, I cry, but I have never felt alone in these four months. I think Marco or Heavenly Father or the Spirit is close to me.”

“We let His power be manifested through us,” she said.  “I hope that people see the way my family and I are faring and will recognize that it is Heavenly Father that is giving us the peace and power and the ways to keep going and to keep working for good.

The scripture she loves goes on two more verses, “We are troubled on every side, yet not distressed; we are perplexed, but not in despair; Persecuted, but not forsaken; cast down, but not destroyed” (2 Cor. 4:8,9).

That describes her well. As we walk together across the vast green lawn at the end of our interview to take her photo, we said, “Sara, you are amazing.” She said, “It is not enough to be amazing now. I have to be amazing to the end.”

Sara Thank you for your courage. Thank you for the goodness you bring to the world. You freely acknowledge the pain that we can experience here on earth, while still allowing the sustaining power from heaven to be a powerful force in our lives. Your testimony & example is felt all over the world.

Appreciate this article, I too need to trust the Lord and with lots of faith. I lost my sweet mother in October 2016 and my mother in law the same year in February. This young family especially the mom has taught me a lot. Thank you for sharing!