Hidden Things: When Joseph Smith Took Control of a Runaway Stagecoach, Saving Everyone Onboard | Meridian Magazine 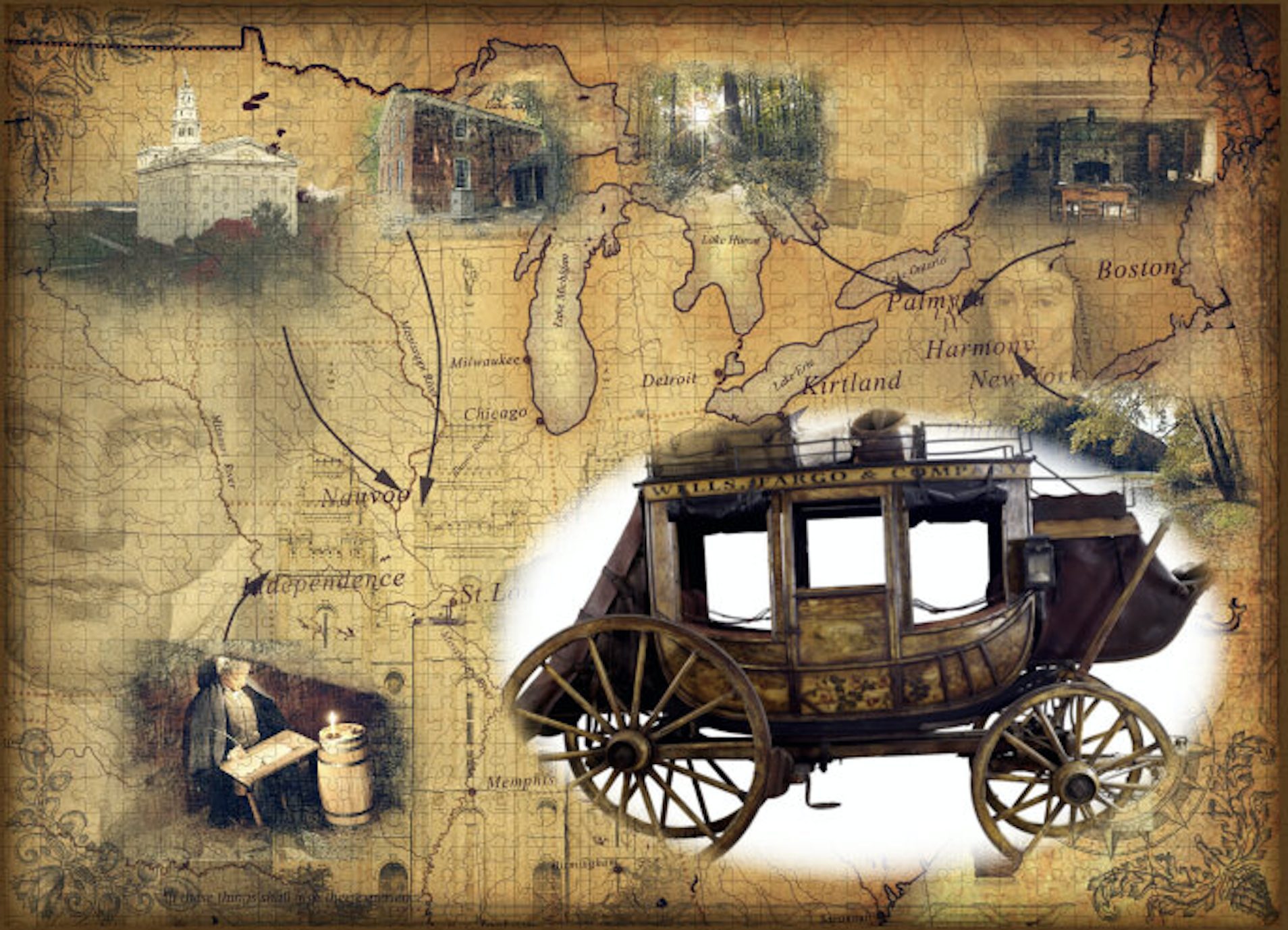 The following is the second in a series of articles giving greater detail from the stories behind the hidden things in our recently released Treasures of the Restoration jigsaw puzzle. If you haven’t gotten yours yet, BUY IT HERE.

If you have, bookmark or print this page so you can hang on to the story to share with your family as you come upon the stagecoach when you do the puzzle. The cover art for this article can help you know what it might look like. Read the first article in the series HERE.

We are probably all familiar with the painful scenes from Liberty Jail where the prophet Joseph Smith and others were imprisoned for months in conditions so deplorable, they inspired the heartfelt entreaty, “O God, where art thou?  And where is the pavilion that covereth thy hiding place?”

Their present circumstances were decidedly difficult, but perhaps more painful was the knowledge that the Saints outside were suffering such bitter persecutions and Joseph and the others with him were helpless to do anything for them. Many had lost their homes and even their lives to the violent mobs in Missouri. Though Joseph pleaded for divine protection for them, it was also at this time–and with the encouragement from Sidney Rigdon and others who were beginning the process of resettlement in Illinois–that Joseph decided that they should seek protection from the federal government as well.

Joseph Smith left Liberty Jail in April 1839 and by October of that same year, he, Elias Higbee and Sidney Rigdon were appointed to be the official delegation to represent the Church to the federal government where they would impeach the state of Missouri for failure to protect the saints—it was in violation of the Constitution and there should be federal consequences.

More specifically, according to Spencer McBride, “Their petition was going to go to Congress and they wanted Martin Van Buren, architect of the Democratic party to speak out in their favor in his annual message to Congress or as we call it today, the State of the Union address. It was a written address that was published in the newspapers and read before Congress. The Mormons were hoping that he would mention their plight and their cause in the State of the Union address and that would urge Congress on to take action.”

The delegation set off from Nauvoo on October 29, 1839, but was almost immediately delayed by Sidney Rigdon’s suffering from the lingering effects of what was likely malaria. They stopped in Springfield to try to let him rest, and then attempted to continue. They only got as far as Columbus, Ohio, however, before they had to stop for him again.

Out of concern that they might not get to Washington, D.C. before the legislative session began, the company decided to separate. Joseph Smith and Elias Higbee boarded a stagecoach to continue onward to Washington, leaving Sidney Rigdon in the care of Robert D. Foster, a physician and recent convert to the Church.

Not long after boarding the stagecoach, Joseph and Elias realized who one of the other passengers was. They were on their way to the capital to impeach the state of Missouri and who should share the ride, but one of Missouri’s Congressmen. It was no doubt an unnerving realization, but thankfully he did not recognize them. In fact, according to a letter they sent back to Hyram Smith, this Congressman from Missouri was “…drunk but once, and that however was most of the time.”

It is from Dr. Foster’s record that we get the following dramatic account of what happened on the next leg of Joseph and Elias’ journey:

“…at the top of the mountain called Cumberland Ridge, the driver left the stage and his four horses drinking at the trough in the road, while he went into the tavern to take what is very common to stage drivers, a glass of spirits. While he was gone the horses took fright and ran away with the coach and passengers. There was also in the coach a lady with a small child, who was terribly frightened. Some of the passengers leaped from the coach, but in doing so none escaped more or less injury, as the horses were running at a fearful speed, and it was down the side of a very steep mountain.

The woman was about to throw out the child, and said she intended to jump out herself, as she felt sure all would be dashed to pieces that remained, as there was quite a curve in the road, and on one side the mountain loomed up hundreds of feet above the horses, and the other side was a deep chasm or ravine, and the road only a very narrow cut on the side of the mountain, about midway between the highest and lowest parts. At the time the lady was going to throw out the child, Joseph Smith . . . caught the woman and very imperiously told her to sit down; and that not a hair of her head or any one on the coach should be hurt. He did this in such confident manner that all on board seemed spell-bound; and after admonishing and encouraging the passengers he pushed open one of the doors, caught by the railing around the driver’s seat with one hand, and with a spring and a bound he was in the seat of the driver.

The lines were all coiled around the rail above, to hold them from falling while the driver was away; he loosened them, took them in his hands, and although those horses were running at their utmost speed, he, with more than herculean strength, brought them down to a moderate canter, a trot, a walk, and at the foot of Cumberland Ridge to a halt, without the least accident or injury to passenger, horse or coach, and the horses appeared as quiet and easy afterward as though they had never run away.

The only problem is, as I mentioned, Robert Foster wasn’t with them on the last leg of the journey to the nation’s capital. So, where did he get such details to this story? The story isn’t made up, we know that it happened. Not only was a letter of appreciation published in a local paper, Elias Higbee (who did personally witness the event) made mention of the incident in a letter, giving this much more sparse account of what happened:

The horses ran away with the stage; they ran about three miles; Brother Joseph climbed out of the stage, got the lines, and stopped the horses, and also saved the life of a lady and child. He was highly commended by the whole company for his great exertions and presence of mind through the whole affair. Elias Higbee [who was the reporter of this event, said of himself that he] jumped out of the stage at a favorable moment, just before they [stopped], with a view to assist in stopping them, and was but slightly injured. We were not known to the stage company until after our arrival.

The truth of the details beyond that Joseph bravely stepped out of the moving stagecoach and brought it to a stop, saving a woman and child, is hard to know for certain. There is even some disputation about the presence of the Missouri congressman, but it is in Elias’ letter that he is mentioned so there’s a good chance that his life was among those saved by Joseph Smith’s willingness to act quickly and put himself at risk for the safety of others (even the safety of someone who may have wronged he and the Saints).

Because Robert Foster wasn’t present to personally witness the details that he recorded, doesn’t mean that they don’t come from someone who was. He recorded them years later in a letter to Joseph Smith III, but they could have easily come from conversations with his fellow travelers upon their return from their errand. Perhaps he had a better penchant for details and that is why his account gives us so much color, vibrancy, and drama.

We may never know for certain. But this is what we in the present get to do to begin to get a picture of history. We piece together what we can, the best way we can, and the treasure hunt continues.

Either way, remember when you come upon the stagecoach in the Treasures of the Restoration puzzle the bravery of Brother Joseph in doing something that you thought only happened in movies; stepping onto the outside of a rushing, runaway carriage and saving the lives of everyone onboard.