Halo Tracing: How to Be an Angel | Meridian Magazine 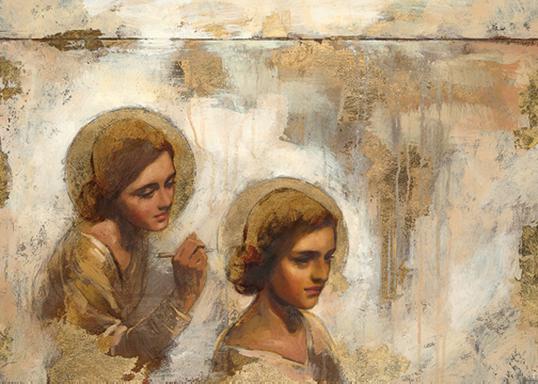 Halo Tracing: How to Be an Angel

I’ve written a lot about angels and the help we receive from them. What I haven’t yet mentioned is the joy and wonder that can also be ours by seeking this errand of angels; to be a miracle in someone’s life…

Years ago, I was concerned about a special friend.  I prayed a lot for her and asked the Lord to send angels to help her through a difficult time she was having.  That day, I went to the temple, and while there, I again offered a fervent prayer for angels to help her.  This time as I was praying, I heard the surprising words in my mind, “YOU are one of the angels helping her!”

I was stunned! What a beautiful awareness!  I was taught that when we sincerely and fervently pray for others, we become their “angels,” and often through us they receive blessings they wouldn’t otherwise receive.

In a similar account, I had a dear friend share a very sacred dream. She had a daughter that had estranged herself from their family and God.  One night my friend had a dream where she saw an angel in white bending over and kissing her wayward sleeping daughter.  Suddenly, the picture changed, and that angel transformed into my friend.  Now it was she that was bending over her daughter in the loving gesture, and then she woke up being filled with the glory of the spirit.  It became clear to her that she was in a partnership with angels to help her daughter.”[1]

Adding Substance to our Souls

Spencer W. Kimball echoes this concept when he said,

“The more we serve our fellowmen in appropriate ways, the more substance there is to our souls.”[3]

“Angel work” is JOYFUL and literally adds to our essence!  How wonderful is that?

Are angels metaphorically “tracing” halos around you? I bet they are.

An “Angel” Who Learned from Angels

As we seek to be angels in this sphere, we can be used in countless ways.  The following is unusual but shows the variety of our angelic possibilities.

Barbara Lee spent her entire life giving service.  When she was 85, her body limited her to be in bed most of the time, and she felt it was time to die and return to God.

Her daughter Carolyn Allen shared how one day, her mom began to look very pale and still.  Carolyn thought her mother was dying, but several hours later, her mother suddenly opened her eyes and began to speak saying, “It’s not time for me to die!”

Barbara explained that she had experienced something truly wonderful.  She described heaven and how beautiful it was. Over the next few years, she was allowed to visit the other side several times. Each time she would come back from heaven with more information.  She said, “Angels are all around us;” and “The veil is very thin.”  She described many new insights and understandings to her family.

When grandchildren came to visit, she told them things she had learned that were specifically for them.  Talk about service!  Barbara served as an “angel” who had been taught by angels.[4]

We most likely won’t have the experience of going to the other side before our time, but we CAN bring the spirit of Elijah to our family, by telling the spiritual stories of the family and bearing our own testimonies…

Many years ago, I made what I thought was a big effort to go to the temple.  I was feeling harried and jangled because of the time it took to get there and the many projects I had left behind.

While there, I remember looking into the eyes of a temple worker.  Her eyes were pools of peace.  She didn’t say anything to me, but I could feel the peace radiate from her, and it entered into my soul, calming all my fears and worries.  I could feel the Lord through her.  At that moment she was my “angel.”

Can others feel peace through us?

“Brothers and sisters, I believe in angels…I promise that if we are willing to serve, the Lord will give us opportunities to be ministering angels. He knows who needs angelic help, and He will put them in our path.” [5]

Be Someone Else’s Miracle- Taking Initiative

Jim Raines became an “angel” one day and was “put on the right path.”

It was 1970 and Jim was waiting for his mission call.  He lived in Los Angeles, California and his grandmother wanted him to drive her to visit Thatcher, Arizona to visit family.  Since he had nothing pressing to do, he drove her there.

After he dropped his grandmother off, he set off to do a couple of errands.  At some point Jim needed directions to get to his destination.  He saw an elderly man with the hood up on his truck and stopped to ask directions.  In chatting with this man Jim noticed that the man was working on his transmission but was quite clueless how to fix it.  Jim knew how he could help, because he had just put a transmission in his car back home.  As Jim left he said, “I’ll be back and help you do this.”

After returning hours later, Jim found the old man still working on his truck, without making any progress. Jim rolled up his sleeves and after an hour or so, got the transmission installed and working.

Jim was their angel that night and through this act added to his essence as well as theirs.

Be Illuminated and Enlarged

“When you find yourselves a little gloomy, look around you and find somebody that is in a worse plight than yourself; go to him and find out what the trouble is, then try to   remove it with the wisdom the Lord bestows upon you; and the first thing you know, your gloom is gone, you feel the light, the Spirit of the Lord is upon you, and everything seems illuminated.” [7]

When we look for ways to become someone’s miracle, as Jim was, the Lord illuminates and enlarges our spiritual core.

So, BE the “angel” that opens doors for others, listens intently, redirects toxic conversations to positive, visits the lonely, shares testimony, prays and fasts for others, and your goodness will be “traced” into your countenance by adding substance to your soul!

How can you be an “angel” today?

Beautiful article! Thanks for sharing!