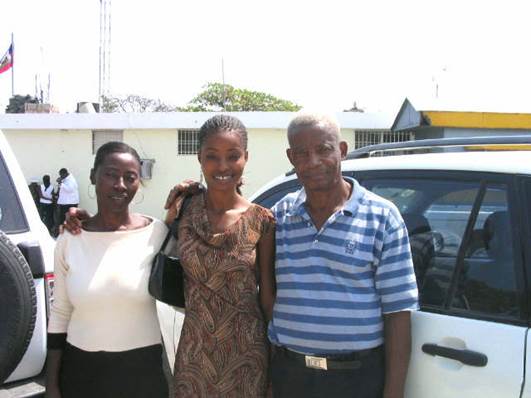 Haiti: I thought the LDS missionaries were all CIA or FBI‏

Cover image: Rousselande with her parents.

Editor’s Note: Emmanuel and Lomaine Buissereth are the parents of nine children in Haiti.  The oldest son’s name is Roussel, and the next three daughters are named Rousseline, Rousselene, and Rousselande.  The five younger brothers and sisters are Emmanuela, Raphael, MedJine, Christopher, and Diana. All have grown up in extremely humble circumstances.  At great sacrifice and continuous hard labor, their mother works as a seamstress sewing long hours on a treddle sewing machine (because of the lack of reliable electricity) and their father performs mechanical repairs when he can find work, to help support their family and to help their children receive schooling.  The following letter was written by the oldest daughter Rousseline to Haiti Mission President Curtis Giles and his wife Ilene Giles.

“Our life began in Haiti, where ninety percent of the population is illiterate and education is secondary to survival.  The situation in my country is critical; corruption exists in all forms of government, especially at the top.  This has affected businesses, and unemployment continues to rise.  This coupled, with natural disasters, have left many starving and others barely able to survive.

We were very fortunate to have parents who sacrificed to make it possible for us to attend a Catholic Girls’ School.  There we began to develop our faith in Jesus Christ.  As we were growing up and attending catechism at the Catholic School, I had many unanswered questions about religion.  Although I had many doubts about the Catholic Religion, I decided to be part of them, feeling that the Catholic Church was the closest one to Christ’s original Church.

In my country of Haiti, we had heard people saying that LDS missionaries are either FBI or CIA.  Wanting to know the truth, when I was seventeen years old, I saw the missionaries passing by my house and I called them to question them about their beliefs, and most especially, to ask if they were really FBI or CIA.  The missionaries smiled and invited us, me, Rousseline, my sister, Rousselene, and our little sister, Rousselande, to go to church and see for ourselves.

When Sunday came, I did go to their church, and that Sunday was a fast and testimony meeting.  I became curious when a missionary bore his testimony and said:  “I know that this is the only true church.”

“There are thousands of churches all over, so I thought how can he say, “this is the only true church?”  So I decided to take the missionary lessons with my sisters in order to know more about “this only true church.”

The third missionary lesson, which is now the first one, is my favorite, because it talks about the Prophet Joseph Smith.  A prophet has been called for our time!!!  This is amazing.  This was the answer to a question that I had asked my Mother a year before: “Mother, why don’t we have any more prophets on earth?”  Mother did not know the answer:  At that moment I knew it was true.  It made sense that our Heavenly Father would call a prophet for our time.

After that discussion with the missionaries, our Father did not want them to come teach us anymore.  Father said to the missionaries:  “My children have a Bible; they don’t need any more Bible.”  I was amazed to hear my Father saying that because I had just read that language in 2 Neph1 29:3 from the Book of Mormon.  “Father was making a prophecy accomplished”, said I to Mother.  This was again another testimony to me.

Since the missionaries could not come over anymore to our house, we decided to have the missionary lessons at the Chapel close to our house instead of basket lessons at school.  We finished the missionary lessons, and a month later we were baptized without our Father’s knowledge.  Mother knew about it and approved. She was so happy that we were being baptized because for her the Catholic’s teaching on infant baptism was not proper doctrine.  We knew if we had told our Father – we would not have been able to be baptized.

When Father found out about our baptism, and that we were going to the “Mormon Church,” it was a really difficult time for us. It was our time of trial.  Father became careless about his responsibility towards us as a provider and we lacked many necessities.  We endured to the end because of the power of the scriptures.  And from them we received what we needed to stay strong.  We knew that the Church was true.  We did not deny it.  I not only read the Book of Mormon, but also the Doctrine and Covenants, and the Pearl of Great Price.  The words contained in these sacred books were what I had been looking for.

“I had compared myself to the story of the people of Alma, how it was hard for them to worship their God after their conversion.  They could not even pray, thus, I said to myself that their situation was worse than ours.  After much fasting and prayer, we were finally allowed to again attend Church.  Father’s persecutions’ weren’t gone, they were just lightened.  The Lord poured His blessings upon us.

After I had found the Restored Gospel of Jesus Christ, I wanted to serve a full-time mission.  Everything seemed impossible when I had that desire, but the Lord  blessed me.  He sent people who helped me accomplish the things that I wanted.  On December 3, 2003, I left my country of Haiti to serve a full-time mission for the Church of Jesus Christ of Latter-day Saints in the Florida Fort Lauderdale Mission. This was the greatest experience of my life.  I was able to see the power of the Gospel of Jesus Christ change the lives of many people.  A year later, my sister, Rousselene, fulfilled her dream and also went on a mission, being called to serve in the Salt Lake Temple Square Mission.  And then – one and ½ years later – our sister, Rousselande, was called to serve a mission in our hometown in Haiti. I was the first Haitian sister to be able to obtain a Visa to leave Haiti as a missionary in many years.

Can you just imagine why we decided to spread the Gospel?  For us it was not simply a choice, it was a calling.  And we knew it – from the time we received the Restored Gospel. Rousselene and I have finished our missions and now have the special privilege of going to school at LDS Business College in Salt Lake City.  We are thankful to be here going to school.   We know that the Church of Jesus Christ of Latter-day Saints is the only true church on the earth.  Joseph Smith was a true Prophet of God, and that he translated the Book of Mormon, the word of God

Our Father’s heart softened over the years and he has since allowed our five younger siblings to also be baptized.  My mother and father were also eventually baptized. Can you see and feel it?  The fullness of the Gospel of Jesus Christ is once again in our hands.  God still speaks to us today through the power of His Priesthood.  It is our prayer for you and us that we continue to understand and know the truth that we all stand for.

A beautiful and uplifting story. Thank you for your strength and courage and conviction.

Dear sister BuisserethI am So so happy that your dad finally joined the church. Your family is amazing. I will always love your family !! Ak lafwa tout bagay posibRenmen - Spell