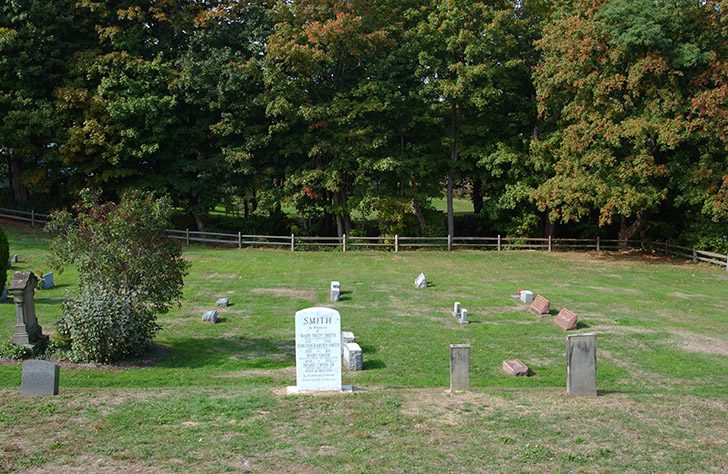 Mary Duty Smith, grandmother of the Prophet Joseph, arrives in Kirtland and dies ten days later. Joseph Smith Sr. and John Smith perform a mission to the East, visiting many of their extended family and trying to further convince them of the Restoration. Hyrum’s wife, Jerusha, passes away in Kirtland.

In the year 1836, my husband and his brother John were sent on a short mission to New Portage. While there they administered patriarchal blessings and baptized sixteen persons.

Soon after they left for New Portage, their aged mother arrived in Kirtland from New York, after traveling the distance of five hundred miles.[i] We sent immediately for my husband and his brother, who returned as speedily as possible and found the old lady in good health and excellent spirits. She rejoiced to meet so many of her children, grandchildren, and great-grandchildren, whom she expected never to see.

In two days after her sons John and Joseph arrived, she was taken sick and survived but one week, at the end of which she died, firm in the faith of the gospel, although she had never yielded obedience to any of its ordinances. Her age was ninety-three years.[ii]

Many of the Smith family were buried in this cemetery in Kirtland, including Mary Duty Smith.[iii]

In a short time after her death, my husband and his brother John took a journey to visit branches of the Church in the East, and the following is a sketch from the journal of John Smith of this tour:[iv]

“We traveled through New Hampshire, and on our way we visited Daniel Mack, who was Joseph’s brother-in-law. He treated us very kindly but was unwilling to hear the gospel. We traveled thence up the Connecticut River to Grafton. Here we found our sister Mary, whom we had not seen for twenty years. The prejudice of her husband had become so strong against Mormonism, that she was unwilling to treat us even decently. From this place we went to Vermont, through Windsor and Orange Counties, and found many of our relatives, who treated us kindly, but would not receive the gospel. We next crossed the Green Mountains to Middlebury. Here we found our oldest sister, Priscilla, who was very much pleased to see us and received our testimony. We stayed with her overnight, and the next day set out for St. Lawrence County, New York, where we had one brother and a sister. Having arrived at his brother’s (who was Jesse Smith), we spent one day with him. He treated us very ill. Leaving him, we went to see our sister Susan. I had business about ten miles on one side, and during my absence, Jesse pursued Joseph to Potsdam, with a warrant, on a pretended debt of twelve dollars, and took him back to Stockholm. Not satisfied with this, he abused him most shamefully, in the presence of strangers; and he exacted fifty dollars of him, which Joseph borrowed of brother Silas, who happened to be there just at that time from Kirtland, and paid Jesse this sum, in order to save further trouble.

“The meekness manifested by brother Joseph upon this occasion won the feelings of many, who said that Jesse had disgraced himself so much that he would never be able to redeem his character.

“From Potsdam we went to Ogdensburg, when to our joy we found Heber C. Kimball, who had raised up a small branch in that place. These were the first Latter-day Saints we had seen in traveling three hundred miles. On the tenth of October, we returned home.”

The death of so many Smith family members was devastating.

About one year after my husband returned from this mission, a calamity happened to our family that wrung our hearts with more than common grief. Jerusha, Hyrum’s wife, was taken sick and, after an illness of perhaps two weeks, died while her husband was absent on a mission to Missouri.[v] She was a woman whom everybody loved who was acquainted with her, for she was in every way worthy. The family were so warmly attached to her that had she been our own sister they could not have been more afflicted by her death.

[i] In Joseph Smith’s record, dated May 17, 1836, he states: “I went in company with my brother Hyrum, in a carriage to Fairport, and brought home my grandmother, Mary Smith, aged ninety-three years. She had not been baptized, on account of the opposition of Jesse Smith, her eldest son, who has always been an enemy to the work. She had come five hundred miles to see her children, and knew all of us she had ever seen. She was much pleased at being introduced to her great grand-children, and expressed much pleasure and gratification on seeing me.

“My grandfather, Asael Smith, long ago predicted that there would be a prophet raised up in his family, and my grandmother was fully satisfied that it was fulfilled in me. My grandfather Asael died in East Stockholm, St. Lawrence county, New York, after having received the Book of Mormon, and read it nearly through; and he declared that I was the very Prophet that he had long known would come in his family.

“On the 18th, my uncle Silas Smith and family arrived from the east. My father, three of his brothers, and their mother, met the first time for many years. It was a happy day, for we had long prayed to see our grandmother and uncles in the Church.” (History of the Church 2:442-43.) In Lucy’s Early Notebook she noted Mary Duty’s move to Kirtland: “When she arrived there, she said to Lucy, ‘I am going to have your Joseph baptize me, but I will have my blessing from my Joseph.’ But in twenty days after she got there, she was taken sick and died.” (Early Notebook, pp. 44-45.)

[ii] Joseph’s record continues: “On May 27 [1836], after a few days’ visit with her children, which she enjoyed extremely well, my grandmother fell asleep without sickness, pain or regret. She breathed her last about sunset, and was buried in the burial ground near the Temple, after a funeral address had been delivered by Sidney Rigdon. She had buried one daughter, Sarah; two sons, Stephen and Samuel; and her husband, who died October 30, 1830, and left five sons and three daughters still living. At the death of my grandfather, who had kept a record, there were one hundred and ten children, grand children and great grand children.” (History of the Church 2:443.) Lucy spoke of her father-in-law, Asael Smith, in her Early Notebook, saying that he, “on his deathbed, declared his full and firm belief in the everlasting gospel, and also regretted that he was not baptized when Joseph, his son, was there, and acknowledged that the doctrine of Universalism which he had so long advocated was not true, for although he had lived this religion fifty years, yet he now renounced it as insufficient to comfort him in death” (Early Notebook, pp. 43-44).

[iv] Joseph, age sixty-four, and John, age fifty-four, set out on their mission just days after burying their aged mother. This mission would take them by foot and by wagon over twenty-four hundred miles and last four months. “They baptized many, conferred blessings upon many hundreds, and preached the Gospel to many thousands” (History of the Church 2:467). This mission would last from about the first week of June until October 2, 1836.