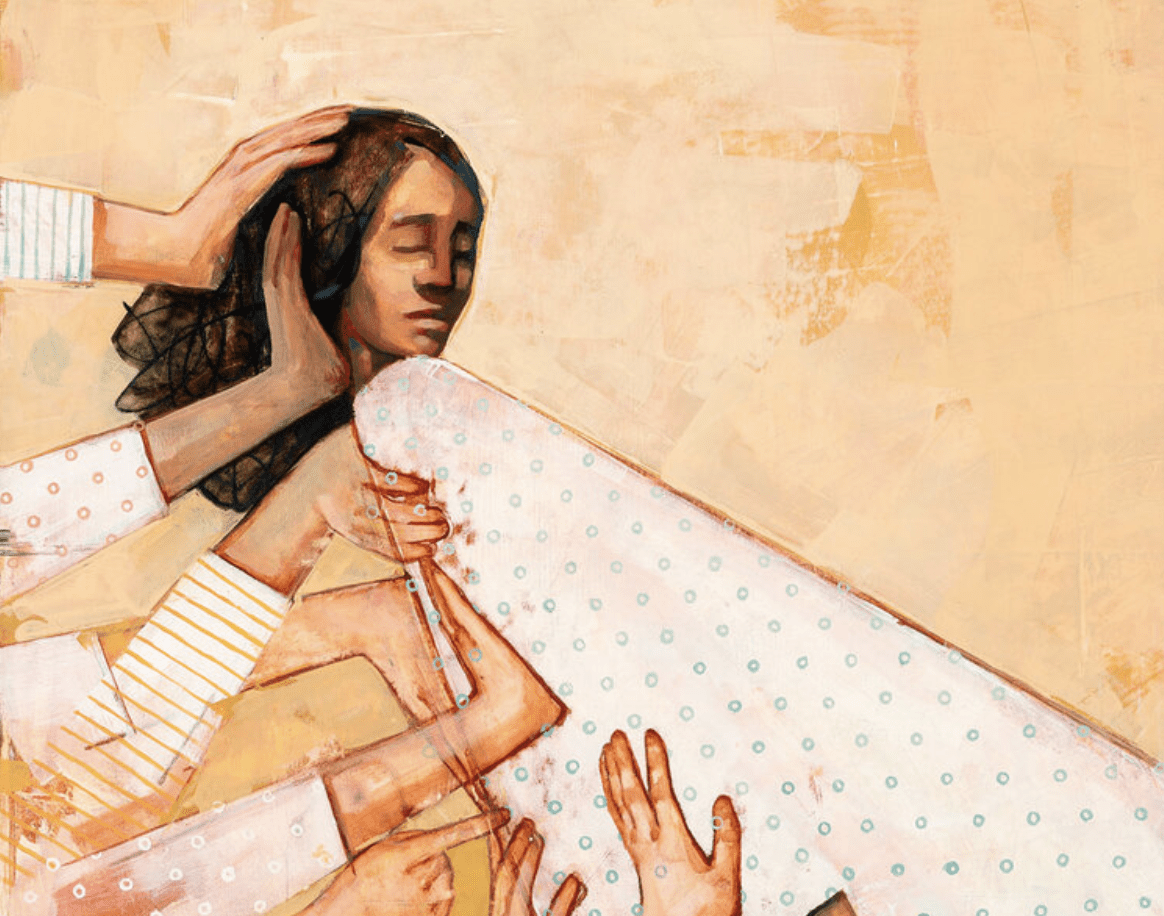 Cover image: “Resting on the Hands of Those Unknown” by Caitlin Connolly.

This life is just a reflection and a whisper of the life we had before.  In that world, we nurtured deep intimate relationships with dear friends for unknown eons of time. Sometimes in this world, the veil is temporarily lifted to open up loving echoes of that familiarity we once shared.

I Know That Man!

Hugh B. Brown told Truman Madsen about a significant awareness he had one day as he was walking down 3rd Avenue in Salt Lake City years ago.  He saw a man coming down the street he never had met before, but felt a strange familiarity with him.  Brother Madsen writes,

“As they were side-by-side, it was, he says, ‘like an electric shock.’ Both      walked a few steps further, stopped, turned around and stared.  Then they walked on.  President Brown later learned that this was Orson F. Whitney, who became a member of the Council of Twelve. ‘I am as certain as I live,’ he said to me, ‘that I had known him in the pre-mortal world.’” [1]

Years ago, my parents Rose and Harvard Hinton served a mission as Family History Area Coordinators, servicing several European countries. My mother told me about an unusual experience she had one day as she was walking down a city street in Germany.  As she approached a streetlight, (which was a red light), she became aware of an older German woman staring at her.  As soon as my mother saw her face, she suddenly felt a tremendous connection and familiarity with this woman.  My mother didn’t know German, and this woman didn’t know English so there was no form of verbal communication, but they both just instinctively embraced each other as long lost friends.

When the light turned green, they both went their separate ways, never to meet again in this life, but knowing that there had been a wonderful history between them in another time and place.[2]

When the Veil Becomes Thin

“Preexistence is not some remote and mysterious place. All of us are but a few years removed from the Eternal Presence, from him whose children we are and in whose house we dwelt. All of us are separated by a thin veil only from the friends and fellow laborers with whom we served on the Lord’s errand before our eternal spirits took up their abodes in tabernacles of clay.”[3]

Sometimes we not only feel a familiarity with fellow sojourners on earth, but we also occasionally are allowed actual glimpses of pre-mortality as the next two experiences will illustrate.

My Own Preview of Pre-Mortality

Many years ago, I was expecting our third son.  During that pregnancy, I had prayed fervently that I could have a spiritual experience at the birth.  I longed for the veil to part and show me something remarkable, but the birth came and went, and I felt nothing.  I was bitterly disappointed.

Hours after the birth however, as I held this beautiful baby boy in my arms, I had a never to be forgotten experience where I caught a sudden and breathtaking spiritual glimpse of the “Preexistence.”  I was there with this son, (who was an adult spirit), and we felt such love for each other.  My spiritual memory was opened up to remember that he had chosen me to be his mother, and that I had most willingly and joyfully agreed.  He also made it clearly known to me that he wanted his name in this life to be Gary.

This window of enlightenment was short-lived, but it revealed enough to me that I KNEW who he was, and knew that I chose him and that he chose me! He was meant to come to our family! As I have spoken with people about this topic, I have discovered that my experience is not unique.  Many have had similar understandings with yet to be born spirits.

Chinua Achebe was a Nigerian author who studied oral traditions of African cultures.  He wrote about their strong belief that there was a life before this earth-life.  He said,

“Some cultures presuppose the existence of a child even before conception.  For example, from Africa come reports of tribal stories ‘about how children come from the world over there into the world of men…. The child comes from somewhere else…there is a constant coming or going between us and the world of the ancestors….’” [4]

This reflects our view of spirits coming down to earthly families thrilled to begin their new lives with people they most likely have loved for ages past.

President Russell M. Nelson, and his wife Dantzel had 9 daughters and finally a son.  The story of this little boy’s birth was quite remarkable.  In 1957, in the middle of the night, Russell was awakened by Dantzel, telling him of a vivid dream she had just had. She told him:

“During the night, I had a vision.  It was more than just a dream.  I saw a baby boy. He had a round face and lots of hair and he looked just like    you. I had a wonderful visit with him.”

Dantzel was pregnant with their sixth child, and they thought this dream meant they were going to have a boy soon, but instead she had another wonderful little girl.

After Dantzel’s s first vision of the dark-haired little boy, the Nelsons had four more baby girls, but all the while her nighttime visions of a baby boy continued:

“I saw him again,” she would tell Russell in the morning. He’s such a sweet and special young boy.”

Dantzel was getting older, and it was getting harder and harder to carry babies.  She didn’t stop, however, because she felt this little boy would surely come to their family.  President Nelson also had an unusual experience where he learned that to be true.  He said:

“While in Sun Valley, Idaho, speaking at a meeting of the Idaho Heart         Association, Russell awoke in the middle of the night with the clear impression that this time Dantzel was carrying the son she had been seeing for years.  And he also had the impression that the little boy’s name should be Russell Marion Nelson Jr.”

When she saw him, she exclaimed:

I marvel about the familiar feelings we can sometimes feel towards unknown people or Déjà vu like situations we come in contact with.  They can seem almost tangible, but we just can’t seem to hold onto them for long.  Like a dream that fades as we wake…

Someday, all those wisps of memories will become very clear. President Benson taught about one of these moments of clarity that will surely come to all of us.  He said,

“A few years ago, we knew our Elder Brother and our Father in heaven well. We rejoiced at the upcoming opportunity for earthly life that could make it possible for us to have a fullness of joy as they had. We could hardly wait to demonstrate to our Father and our Brother, the Lord, how much we loved them and how we would be obedient to them in spite of the earthly opposition of the evil one. And now we’re here—our memories are veiled—and we’re showing God and ourselves what we can do. Nothing is going to startle us more when we pass through the veil to the other side than to realize how well we know our Father and how familiar his face is to us.” [6]

Yes, one day our Father’s face will again become familiar along with faces of beloved spiritual siblings we may have crossed paths with or birthed in this lifetime.  When that happens, our pre-earth memories will once again flare into brilliance, and we will be “home!”

[4] Sarah & Brent Hinze, The Castaways: Safely in His Arms p. 22 Italics added (Chinua Achebe, Jonathan Cott “At the Crossroads – An Interview with the Nigerian Writer,” Parabola – Myth and the Quest for Meaning, vol. 6 no. 2, pp. 28-39)

When I was at BYU in an apartment of young women we always had morning prayer. One morning Linda was the one giving the prayer. I had a vision while she was praying. We were in a large circle in a beautiful green meadow, surrounded by trees and flowers. There was 50 to 100 people there, her boyfriend was saying the prayer there, the other person I recognized was my boyfriend and I knew it was their time to come to Earth. The vision ended and I was kneeling with my roommates. I have a painting painted by Michael Wheeler and it is a view of the meadow and walking through flowers to reach it. Also I have meet 10 or 20 people who I know were there. It is a wonderful memory and I can look at my painting and bring it to mind.

We had a sacred experience with our first born child. He began talking at a very early age. By ten months there were several words he could say fairly clearly. When he was 19 months old, we had just moved into a new house and his nursery was at the end of the short hall with our room on the left side. One night we were walking down the hall (we'd just come home from somewhere) and he stopped in the middle of the hall (he was walking in front of us), and pointed down into his nursery. He said, pointing, "Look! Spirits!" (the word Spirits was not in his vocabulary). Then he shrugged his little shoulders and said, "Spirits gone. Spirits gone home." We both knelt down there right in the hall and asked him what the spirits looked like. He smiled at us and said one word. "Smoke." And then he continued walking into his room. That was on Saturday. On Monday we decided it was time to do a real Family Home Evening and so I had a photo of Jesus in a frame...the one we use in church with the red cloak. We started off by showing him the picture and said "Jonathan, this is Jesus." He smiled and patted Jesus's picture and told us, "Jesus hold me and talk to me." We were so overcome, and we still take that experience as the closest thing we will ever have in this lifetime to sure knowledge that the Savior is real and that the pre-mortal existence is real. Nineteen month old children are not capable of making up untruths and the spirit was so strong with us. I have since had many, many more experiences (especially with doing family history) that have testified to me of the reality of the veil spoken of here and the closeness we have with those on the other side of it.