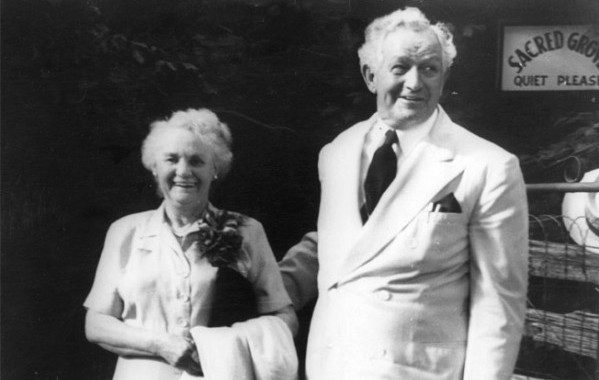 To celebrate Valentine’s Day, I thought I’d share examples of the tender, poignant love stories of a few of our apostles and prophets from the past. These couples typify the joy that can be found in a true eternal companionship whether it’s in those meaningful first meetings or in a lifetime of love, service and positive influence on one another.

We all remember Elder Richard G. Scott as a romantic. He was outspoken in his love and devotion to his wife Jeanene in many a conference talk and devotional, though he had to live without her for 20 years. At the time of his death, their undoubtedly sweet and long-awaited reunion was the first thing on everyone’s mind.

Of their affectionate and caring relationship, he said:

I learned from my wife the importance of expressions of love. Early in our marriage, often I would open my scriptures to give a message in a meeting, and I would find an affectionate, supportive note Jeanene had slipped into the pages. Sometimes they were so tender that I could hardly talk. Those precious notes from a loving wife were and continue to be a priceless treasure of comfort and inspiration.

I began to do the same thing with her, not realizing how much it truly meant to her. I remember one year we didn’t have the resources for me to give her a valentine, so I decided to paint a watercolor on the front of the refrigerator. I did the best I could; only I made one mistake. It was enamel paint, not watercolor. She never let me try to remove that permanent paint from the refrigerator.

I remember one day I took some of those little round paper circles that form when you punch holes in paper, and I wrote on them the numbers 1 to 100. I turned each over and wrote her a message, one word on each circle. Then I scooped them up and put them in an envelope. I thought she would get a good laugh.

When she passed away, I found in her private things how much she appreciated the simple messages that we shared with each other. I noted that she had carefully pasted every one of those circles on a piece of paper. She not only kept my notes to her, but she protected them with plastic coverings as if they were a valuable treasure. There is only one that she didn’t put with the others. It is still behind the glass in our kitchen clock. It reads, “Jeanene, it is time to tell you I love you.” It remains there and reminds me of that exceptional daughter of Father in Heaven.

(Excerpted from his talk, The Eternal Blessings of Marriage)

Elder Neal A. Maxwell, who served in the Quorum of the Twelve Apostles from 1981 to 2004, met Colleen Hinckley in an institute class at the University of Utah. She was a senior, just preparing to leave campus and become a teacher and he was just back in school after four years in the military and missionary service.

“Colleen noticed how much the other students turned to Neal with their questions about the gospel, politics, or other topics. She noticed even then his skill at drawing quiet people into the discussion and thought to herself, ‘Who is this guy?’”

But she was emotionally occupied with another relationship that she had been developing with someone since junior high. Despite their long history, she wasn’t ready to move forward with him and went off to Arizona to be a teacher and have some time to think. She exchanged letters with this longtime interest and more than once he told her “nice things” about Neal Maxwell.

“So, when she returned home for the summer, it was not an unpleasant surprise the day Neal called her to ask for a date. The only problem was that ‘he talked so fast.’ His approach on the phone somehow ‘made her feel she was number fifteen on a list of girls he’d been calling.’” She turned him down, “just for spunk.”

The rejection didn’t stick, but her tempering influence on him did during their 54 years together. President Dallin H. Oaks who was close to the Maxwells for decades believes that, “Colleen’s ‘influence on him is profound.’ She is ‘a very gentle person on the exterior,’ but ‘he values [her influence] very highly and speaks of it with reverence and appreciation.’ Reflecting her own lifelong instincts to reach for those whose lives ache for encouragement, she has almost unintentionally nurtured the development of Neal’s personal ministry to individuals. Elder Oaks found that this kind of compassion was more inborn with her than it was with him. “I didn’t see that in him much when he was Commissioner [of Church Education in the early 1970s], but now it’s pervasive.”

(Quotes taken from A Disciple’s Life, by Bruce C. Hafen).

Emma Ray Riggs, known as “Ray” first spied young David O. McKay as he and his brother took up residence in a cottage her family rented out behind their home. The two were preparing to attend school at the nearby university.

Ray’s mother said, “There are two young men who will make some lucky girls good husbands. See how considerate they are of their mother.”

Their first date was to David’s missionary farewell dance where he referred to her in his journal as “Miss Riggs” only a few days later on the last time they would see each other before his mission he called her “Ray” and described the evening as follows:

“In the evening, took a ride over on South Hills. Low purple mountains at sunset very beautiful. Sunday evening went strolling with Ray. Told each other secrets. A memorable night!”

After his missionary service, when Ray got word that David was returning home from his mission to Scotland, she was visiting family on Antelope Island in the middle of the Great Salt Lake. The regular passenger boat wouldn’t get her to the mainland in time to be there for David’s return, “so she and her cousin Belle rigged up an old rowboat with a sail, and the two of them rowed across the lake in time for her to be in Salt Lake on his arrival.”

After his mission, David taught at Weber Stake Academy. Ray graduated and was offered two teaching positions; one near her family in Salt Lake and the other in Ogden, near David. She moved to Ogden.

They were the first couple to be married in the Salt Lake Temple in the 20th century when they were sealed on January 2, 1901

President Monson’s future father-in-law realized they had an unusual and poignant connection from the very first time Tommy came to pick Frances up for a date:

The first day I saw Frances, I knew I’d found the right one. The Lord brought us together later, and I asked her to go out with me. I went to her home to call on her. She introduced me, and her father said, “ ‘Monson’—that’s a Swedish name, isn’t it?”

Then he went into another room and brought out a picture of two missionaries with their top hats and their copies of the Book of Mormon.

“Are you related to this Monson,” he said, “Elias Monson?”

I said, “Yes, he’s my grandfather’s brother. He too was a missionary in Sweden.”

(Excerpted from his talk, “Abundantly Blessed“)

What are the love stories about the prophets and apostles past and present that you have found meaningful or moving? Share them in the comments below!

This is what I am trying to get my ward members to do and post these stories in the memories section of their family tree. Stories like these will increase the knowledge of and love for their ancestors.