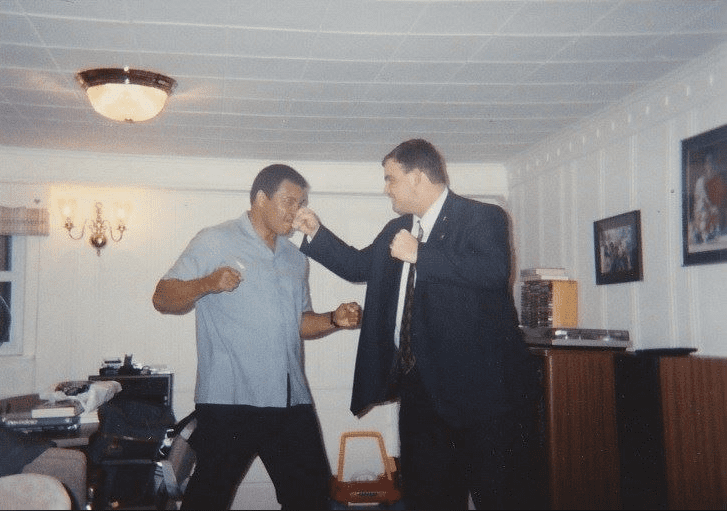 A former LDS missionary has quite the memory of Muhammad Ali.

Craig Proffitt says he and his mission companion visited the boxer three times while serving in the Indiana Indianapolis Mission in January 1992. The two were assigned to serve in the Niles, Michigan area. Ali lived in nearby Berrien Springs, Michigan.

“I always told everybody that was my claim to fame,” Proffitt told 2News from his home in California. “I met Muhammad Ali.”

Proffitt says he thought it was a joke when his companion first took him to Ali’s home in and pushed the intercom button.

“We told him that we were missionaries for The Church of Jesus Christ of Latter-day Saints,” said Proffitt. “And he goes, who?”

Proffitt’s companion had a creative response.

“He said, we’re Orrin Hatch’s friends!” Proffitt recalled, referring to the Utah Republican senator who was good friends with the boxer.

Ali opened the gate, Proffitt said, and let them in.

Elder Profitt looks like a very big fellow. He might have lasted a round. Strange things happen to LDS missionaries. Many years ago in North Carolina, I was getting a free haircut from and LDS barber. A tall blond very handsome fellow walked in and the barber introduced me to Billy Graham. We had a short religious discussion.