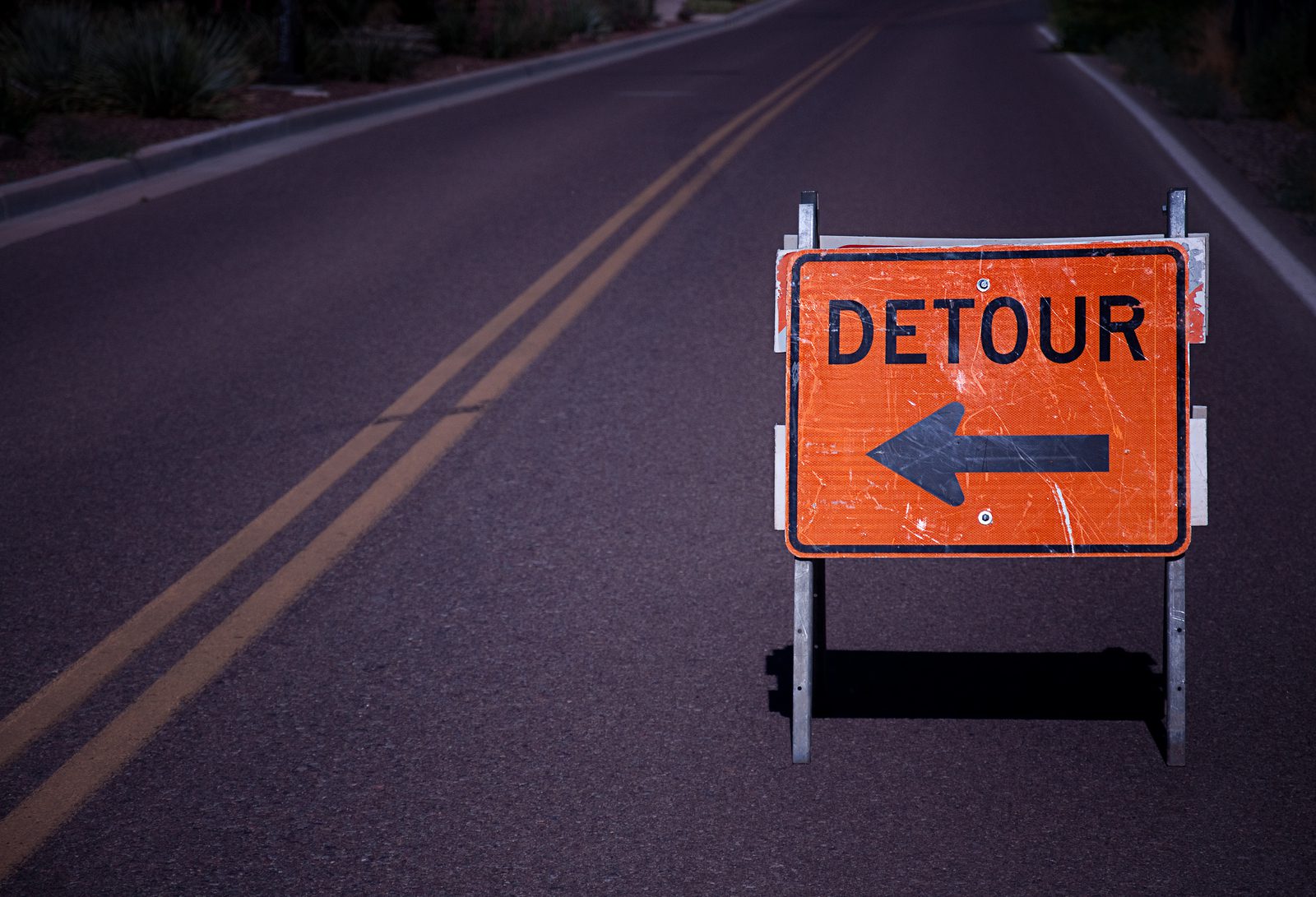 It was the day before Thanksgiving, and we were on our way to the house of some relatives. It was a long way, and we had hoped to get off early, but, as things usually happen, we weren’t able to leave until after noon. Thus it was late by the time we approached our destination.

We only had about 30 miles left to go when we saw the first detour sign. Then I saw the flashing lights of the highway department truck turn ahead of us and block the road. The truck had a big sign with an arrow that pointed in the direction of the detour. The road now closed ahead of us, we were the unlucky ones to be first turned down the detour route.

As I followed the signs that directed us into the middle of the city, there were headlights behind us as far as I could see as other cars followed our lead. The detour path was not well marked, and after we approached the main street of the city, the signs disappeared completely. I presumed there could be different reasons for this. It could be the highway department ran out of signs, or it might be they decided that if they led us to another main road that we could find our own way from there. Of course, I considered, it might be they wanted us to experience the adventure of getting lost.

I made the decision to keep following the main street and watch for signs showing a route back to the interstate. It was almost midnight, so the city traffic was almost nonexistent, but the cars kept pouring in from the interstate. We went for about a mile at the slow city street speed, wondering if we would ever see a sign to get us back. Just then, the stoplight ahead of us turned red. We stopped, and the string of cars piled up behind us. By the time it turned green, there were scores of them.

We started on our way again, and the cars continued to follow us. We traveled another five miles, hitting quite a few more stop lights, and I had just started to wonder if this detour was simply some evil plan to keep us lost in the middle of this city forever, when I spotted a sign indicating the way back to the interstate. At almost the same instant that I saw it, my wife saw a grocery store.

“That reminds me,” she said, “we were supposed to bring some salad for the dinner tomorrow, and I never did get the things I needed.”

As I stepped from our van, I watched as car after car trailed its way through the parking lot. To get to the store, I had to dodge through them. I quickly made my way around the store, gathering the items on the list my wife had quickly scribbled out for me, then went to pay for it.

But there were no clerks at the checkout. They were all standing by the window. One of them finally saw me and came to help.

“Sorry,” he said. “There is something weird going on out in the parking lot. Hundreds of cars are driving through it.”

I smiled. “Really? I wonder why they would be doing that.”

When I went outside, the cars were still coming. I dodged between them again and climbed into my van. They were almost bumper to bumper, but, finally, I saw a short break and merged into the line of traffic, wondering about a very important question.

If I were to come back in the morning, would the line of cars still be driving through the grocery store parking lot?

I found this very amusing and was reminded of a similar experience. While serving as bishop in Lehi, Utah, I attended the Friday events at our YW Girl's camp near Heber Utah. The evening's event culminated in a journey through the woods at night, in the dark, where I was to be the leader, holding a flashlight, while the girl's followed me, as they were instructed to follow the light. We encountered several lighted stops along our pathway where other girls gave short presentations and demonstrations of life's challenges, ending with some spiritual lesson to be taught, and testimonies born. Then we continued on our journey. I was instructed that we would be passing through "a mist of darkness" but that we should hold to the rod (a rope) and continue on our pathway, and at the end I would see a light up ahead where I should lead the girls. Indeed we encountered the mist of darkness, and as we emerged, a young man dressed in a very nice dark suit stopped me and said "hold on to my arm, I will lead you the rest of the way." I did as he requested and he led me off the path, in a different direction away from the light. After traveling about 50 feet down the slope, into the thick underbrush, with all the girls following me, the young man stopped, turned toward me, and started laughing, "I got you!" Only then did I recognize that he represented Satan, and had led me astray, and taken the girls with me. I had not taken heed to my original instructions to look toward the light. To this day, whenever I encounter one of those young ladies, they remind me of that event. Then I say "And I did that intentionally so I could teach you a very important lesson, to be alert and aware that you are following only those who are truly inspired."