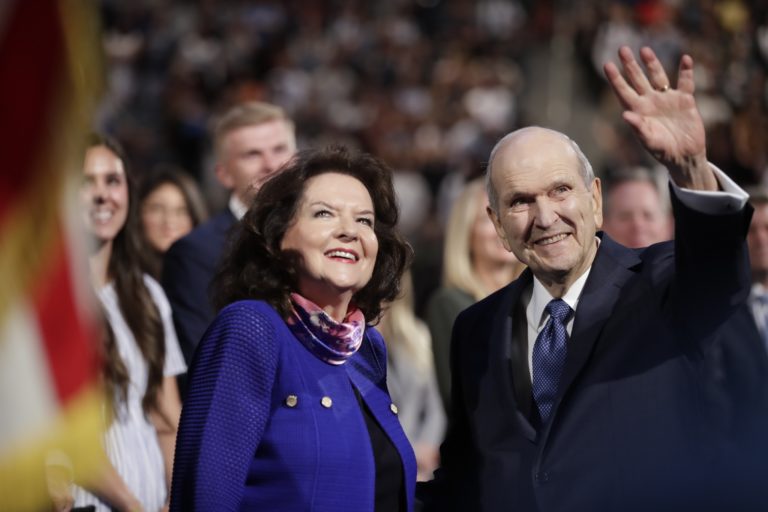 Brigham Young University’s Marriott Center was packed full as President Russell M. Nelson spoke to young adults tuning in from all over the world. Though his devotional was scheduled during BYU’s weekly devotional time, he posted an invitation on social media to young adults everywhere to participate, saying, “I feel inspired to share an important message with you.”

Between recently coming home from his Latin American Ministry Tour, having his 95th birthday celebration, and preparing for General Conference, the prophet is extremely busy, but he told his captured audience that there was no other group he would rather be with that day than them. His message was clear and profound, highlighting five truths he wants the young people of the Church to know:

“You are sons and daughters of God.”

Not only are we all children of God, chosen to be a part of His battalion during His great climax; President Nelson said we may have actually plead with the Lord to be reserved to come to the Earth at this time. “I would not be surprised to learn that premortally, you loved the Lord so much that you promised to defend His name and gospel during this world’s tumultuous winding-up scenes,” he said.

With a world leaning towards moral relativism and extreme tolerance, President Nelson emphasized, “The arbiter of truth is God—not your favorite social media news feed, not Google, and certainly not those who are disaffected from the Church.” Whether we believe it or not, there is a difference between right and wrong because divine laws “operate in and affect each of our lives” no matter what.

“God loves every one of us with perfect love.”

Evidence of God’s love is found in the gift of agency that He gave us, as well as the gift of His Son, Jesus Christ. President Nelson also shared another gift God gives us out of love. “Because the Father and the Son love us with infinite, perfect love, and because They know we cannot see everything They see, They have given us laws that will guide and protect us. There is a strong connection between God’s love and His laws.”

The prophet gave two examples from his life that illustrated the love that laws represent. The first was the way he and his wife created rules to govern their young family as they raised their nine daughters and one son. Though their children didn’t always like the rules nor understand them, they, as parents, created the rules out of a great desire to guide and protect the children they loved so dearly. Likewise, our Heavenly Father has laws to “keep us spiritually safe and help us to progress eternally.”

The second example he drew from was his experience as a young heart surgeon, researching to discover how to safely perform heart surgery. He learned from the Doctrine and Covenants that “all blessings are predicated upon obedience to law” and realized that if he kept the laws that governed hearts, they would enable him to do life-saving procedures otherwise thought impossible.

Beautifully, President Nelson remarked, “Divine law is incontrovertible!…Doctors and pilots do not have the power to change those laws, but their understanding of them safeguards lives. My dear brothers and sisters, divine laws are God’s gift to His children.”

“The Lord Jesus Christ, whose Church this is, appoints prophets and Apostles to communicate His love and teach His laws.”

While prophets and Apostles are often criticized for upholding the laws of God, President Nelson told the young adults that, “We may not always tell people what they want to hear. Prophets are rarely popular. But we will always teach the truth!” The truth includes Heavenly Father and Jesus Christ’s infinite love for all of us and desire for us to be with them again, but the truth also contains the requirement that we must all give a “focused and persistent effort to keep God’s laws and rigorously [repent] when we don’t.”

The prophet drew upon the example of the recent policy changes regarding the baptism of children of LGBT parents, both in 2015 and 2019. He expounded upon the revelation and love behind both policy changes, explaining, “Whenever the sons and daughters of God weep—for whatever reasons—we weep.” He went on to say, “Though it may not have looked this way to some, the 2015 and 2019 policy adjustments on this matter were both motivated by love—the love of our Heavenly Father for His children and the love of the Brethren for those whom we serve.”

“You may know for yourself what is true and what is not.”

With President Nelson’s bold declarations of truth, he encouraged all to seek for themselves, through revelation, to know if the things he spoke were true and whether the prophet and Apostles really do receive truth from God. With this invitation, he gave this final blessing:

The first point: "You are sons and daughters of God" is something that helps me stay focused in even the hardest times. I just repeat over and over out loud if possible or in my heard when it's not, I am a daughter of God, over and over until I feel grounded and focused.

This Prophetic message is not only for the youth but for the entire church membership globally. "We thank thee for a Prophet..."