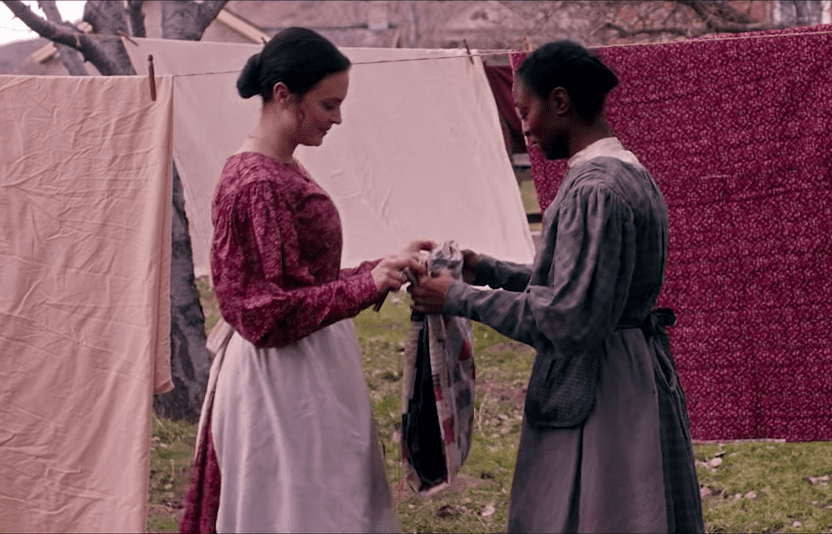 This past week, distributor Excel Entertainment released a first look at their new film, Jane and Emma. The film tells the story of the little-known friendship between one of the first black converts Jane Manning and the wife of the prophet, Emma Smith.

In the film, Jane returns to Nauvoo to find that Joseph Smith, her prophet and friend, has been assassinated. Jane spends a ceaseless night with his widow, Emma Smith, sitting watch over the body of the prophet as a whirlwind of loss and confusion leaves them wondering how either one of them will be able to move forward.

Through the long night, Jane wonders if the prophet’s promise to extend the blessings of eternity to her has died along with him. The film explores the possible events of that night, including Jane’s endeavor to remain amongst the Mormon people and Emma’s struggle to cope with her heartbreaking loss. Poignant issues of racism and polygamy threaten to break their bond of friendship. In the end, will Jane and Emma have the courage to follow the path each believes they must take?

Jane and Emma is directed by Chantelle Squires (The Work and the Glory trilogy) and written by Melissa Leilani Larson (Freetown).

It hits theaters October 12. See the trailer below:

The soundtrack alone makes me anticipate this film with great interest! If it's half as good as "Freetown" it will be superior. My great-great grandfather lived in the Prophet's home when Jane arrived and was himself a recent convert. Upon hearing Jane's story he declared that he didn't know if he would have had such great faith. I'm grateful that her story is being shared and hope it reaches a wide audience.

Will this only be released in Utah?