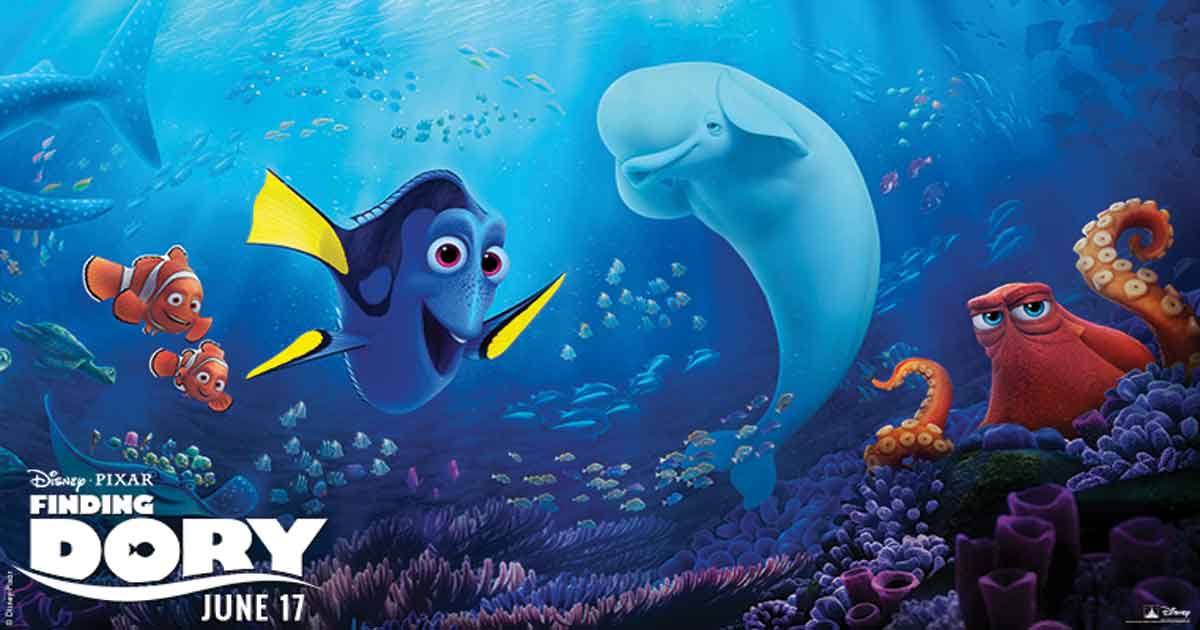 Forgetful fish Dory travels with friends Marlin and Nemo to California in search of her long-lost parents. (Pre-order it here).

Though lacking the novel originality of Finding Nemo, this is a worthy sequel that advances the story and grows the characters in satisfying ways. Thankfully, transitioning a supporting character into a lead character (and vice versa) works much better here than it did in Cars 2. Ellen Degeneres conjures laughs and tears as Dory. The blend of classic characters and new ones is flawless (Ed O’Neil steals the show as a surly octopus), the animation is stunning, and the story is solid, with a rich emotional arc for Dory and her family and a powerful message about disabilities. Pixar’s ability to balance smarts, humor, and heart should not be taken for granted.

Finding Dory is rated PG. There’s peril aplenty, with a giant squid chasing our heroes and numerous threats and obstacles for them to overcome, some of which may worry children. There’s also a few innuendos that only adults will catch. Dory erroneously thinks that she’s being asked to explain to young fishes where babies come from; she begins “When two fish love each other very much…” and is then interrupted. After an octopus accidentally squirts ink into a pool, Dory says something like “Don’t be embarrassed, it happens to everyone.” After stealing a vehicle from two humans, an octopus says “Suck it, bipeds!” Some have expressed worry that the film may give certain children false hope about biological families and adopted families uniting; to me this is a stretch, as Dory is an adult fish who was never adopted by Marlin, nor is she seen as a sibling to Nemo. (If you’re concerned about content, you can watch Finding Dory on VidAngel when it becomes available).

People with disabilities deserve love and acceptance, not judgment (see “I’ll Walk With You,“ Children’s Songbook page 140-141). They may have hidden skills that others don’t. Grumpy people will often respond well to kindness (see Matthew 5:44). There are few things more powerful than the love between children and parents. Don’t be afraid to use your talents. Working as a team will solve more problems than working alone (see D&C 38:27).

After Finding Dory, check out another Disney deep-sea adventure, 20,000 Leagues Under the Sea!

Overlooked/Underrated: 20,000 LEAGUES UNDER THE SEA (1954) from Jonathan Decker on Vimeo.

Jonathan Decker is a licensed marriage and family therapist and film critic at Your Family Expert. His book 250 Great Movies for Latter-day Families is now available in paperback and Kindle.

I'm a little disappointed Jonathan Decker's review of "Finding Dory" doesn't point out that the species of exotic fish to which Dory belongs is already significantly threatened in its natural habitat. Parents should be aware that they don't thrive in private homes and allowing their children to buy them will only put greater pressure on the species as a whole. Please just acquire a copy of the film instead of buying the fish.