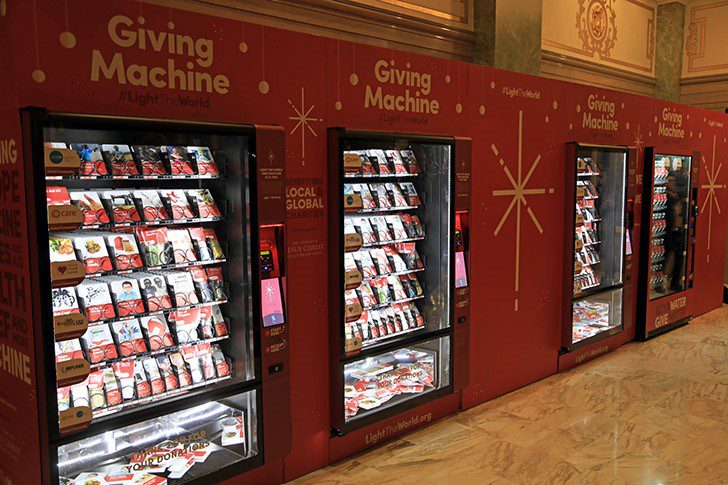 They look like the brightest, reddest vending machines you’d ever see, but it is what’s inside that is impressive. Usually, most of us go up to a vending machine to spend our cash on something forgettable—the bag of chips or Snicker’s bar that will be consumed in three minutes, but these “Giving Machines”, sponsored by The Church of Jesus Christ of Latter-day Saints as part of their #LighttheWorld campaign promise to give a bigger satisfaction—the chance to give as the Lord would this Christmas season.

It is giving with a 21st century twist. This was not lost on the Latter-day Saint influencers who were invited to the unveiling last night at the Joseph Smith Memorial Building. The Church hopes to spread this message far and wide and these social media users talk to well over 6 million people. Come and find the satisfaction of giving, the machines seem to say.

The best way to celebrate the Savior’s birth and life this season is to do as He did and reach out to those in the greatest need.

Here, you can put in your credit card and choose from any one of dozens of gifts that can change someone’s life right now. How about two chickens for $25? Or feed a family for a month for $100? There’s a goat for $65. There are options like filling a backpack for a refugee child or providing eye care for a child whose parents could never afford a doctor.

Last year’s giving machine in Salt Lake City raised $550,000 and so banking on similar support, the Church has placed these giving machines this year in five locations:

One of the foundations receiving the money this year includes EyeCare4Kids. Joseph Carbone of the organization said, “We started this organization because as a practicing optometrist, I saw that so many kids went without professional eye care. We thought we’d help maybe 20 or 30 children a year, but now, we have been able to help over 250,000.

Amy Harmer of Utah Refugee Connection said they are about providing opportunities for the community to help that most vulnerable of populations—the refugees. “These machines make it fun and immediate to give. Sometimes when we are asked to give service as children, we don’t see it as fun, but actually nothing else brings so much joy.”

She told the story of one six-year-old boy who, when his birthday came around, said he didn’t want presents for himself this year. Instead he wanted the kids who came to his birthday party to bring the things that would be needed to create cleaning kits for the refugees. He was so excited and proud to bring his ten finished cleaning kits to help the refugees.

“I love what I do,” said Amy. “I get to see magical things happen all the time. These machines are magical.”

Talking to Amy at the event gave us a great idea. What if for part of our Christmas present this year to our older grandchildren, we give them a budget and let them come up and choose something from the machine to give to somebody else this Christmas?

Think about the memory that would be. This is the most festive thing we have considered that would help us and our family #LighttheWorld this season.

Amy said, “As brothers and sisters and practitioners of His gospel, this is really what it is all about. Christ was reaching out to the poor and the needy and the people on the periphery. He was working with those who are most vulnerable. We can too.”

100 percent of your donation will be used for the purchased item or for similar items of services of greater need as determined by the applicable charitable organization. Administrative costs for this initiative and costs associated with its nonprofit partners are covered by The Church of Jesus Christ of Latter-day Saints.

For more information, go to lighttheworld.org.

Join us at the unveiling in this short video:

What an amazing idea! Is there any possible way that someone living where there is not a machine could still participate, perhaps by having someone who lives near by purchase the items for them? If we don't know someone in the area a designated person could help us feel involved if we were to Venmo or Pay Pal $ with our request. Is there a chance this could be possible? My husband and I are serving a mission in Tonga and would just love to help!